Much like with the film before this one, Day 27 was a chance to also catch up on a director I really like with Mike Flanagan and a film of his I hadn’t yet seen with Oculus (2013) as it perfectly fit the prompt of ‘reflect’. Having been extremely impressed with Flanagan thus far, diving into this film was quite exciting for me and it did not disappoint. Taking some cue’s from Stephen King’s work (IT and The Shining), Flanagan has crafted a family horror drama told through two different times and the tension does not let up once the ball gets rolling. Much like with an earlier film from this month with Into The Mirror (2003), the mirror becomes something of terror and it absolutely taps into that primal fear and after these two films I honestly don’t want to really look in the mirror for awhile!

Told over two timelines Kaylie (played by Annalie Basso as young Kaylie and Karen Gillan as older Kaylie) and Tim (played by Garrett Ryan as young Tim and Brenton Thwaites as older Tim) are siblings and as children they live with their parents and enjoy a new home, as adults things are quite different though. A terrible event happened while they were children that saw Tim locked up until his 21st birthday and Kaylie has been trying to prove the truth about what happened. Reunited as Tim is released the pair reconnect with the mirror their mother brought home and she believes it is responsible for the horrible events that happened to them. They relive their experiences as children and the truth of what happened slowly unfolds as they witness their parents Marie (Katee Sackhoff) and Alan (Rory Cochrane) slowly go mad.

Oculus is actually a very sad film, it is almost heartbreaking to watch the horror unfold as these characters are all likable and seeing the bad things start to happen really hurts. The cut between past and present works fairly well for the most part, as we get to know the siblings very well and the parents and understand exactly what is going on. It does start to cut between fantasy and reality and really bends the mind at parts, which really works quite well as the film progresses. There are some truly horrific moments that hit very hard and there are times where the audience definitely needs a breather but it doesn’t come. Flanagan is great at building atmosphere, suspense and terror and it is all on show here, at times it can be a little too much but overall the film flows fairly well and definitely worth checking out. 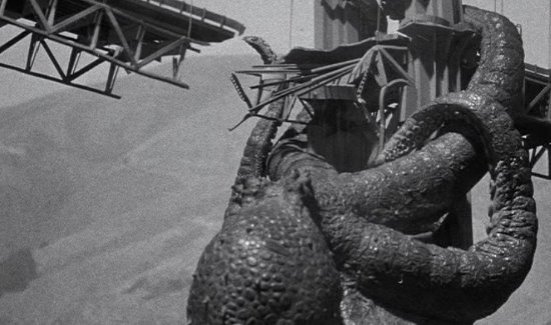 There are so many films that would have easily fit with Day 28’s prompt of ‘water’, that is something very much open to interpretation, however I thought my film choice would be rather traditional with a sea monster film in It Came From Beneath The Sea (1955). This film appealed to me due to the involvement of the legendary Ray Harryhausen and from the brief glimpses I had seen before watching the film, the giant octopus looked incredible. The film itself is a rather by the numbers affair, elevated by the work of Ray Harryhausen and very much a product of the 50’s.

When a submarine under Commander Mathews (Kenneth Tobey) encounters a strange object in the sea, some remains are found and when tested by Prof. Lesley Joyce (Faith Domergue) and John Carter (Donald Curtis) discover the creature may be a giant octopus. The octopus they believe was living in the great ocean depths but nuclear bombs have brought it out of hiding and it is looking for a new food source. Whilst the trio are not believed at first, the giant octopus causes more chaos and they are in a race against time to stop the monster before it causes havoc.

For the most part It Came From Beneath The Sea takes itself far too seriously, there is a lot of seriousness and scientific talk throughout the film and the really fun scenes are a bit too few and far between but when they come and the monster is there it is glorious. For the most part the film is actually quite fun and enjoyable, the dialogue scenes can be a little over long but still hold interest due to a solid cast. The highlight is naturally the giant octopus and the work from Ray Harryhausen, it truly is top notch work with stop-motion animation and puppetry combined with some great camera trickery. Knowing the time period this was made and just how great everything looks is just all the more impressive and definitely a worthwhile film to watch. The film is one of the more memorable ones from the 50’s era of giant monsters, with a giant octopus that looks far more threatening than whatever Ed Wood used in Bride Of The Monster (1955).