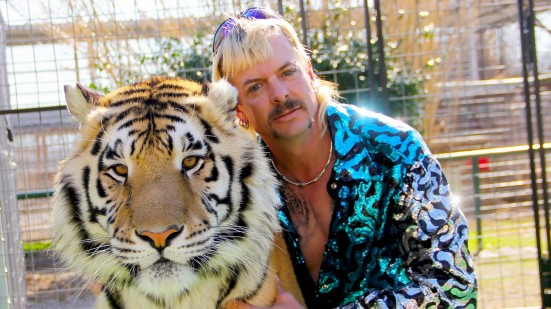 Welcome back to The Super Podcast for our 148th episode, listeners!

Hello, all you cool cats and kittens! After taking a two month hiatus from recording, your awesome hosts ‘Super’ Marcey Papandrea & ‘The Terrible Australian’ Bede Jermyn are back to bring you this latest installment of The Super Podcast. While the world is currently in the midst of a on-going pandemic due to the COVID-19 virus, everyone is using this time of self-isolation to watch or catch-up a lot of films and TV shows. However during this pandemic, one certain Netflix documentary series suddenly came out of nowhere and instantly became one of the most talked shows of the year so far: Tiger King: Murder, Mayhem and Madness. Since they are both absolutely obsessed with Tiger King, Marcey & Bede decided to do a podcast on the show and discuss the complete utter madness of it all.

So sit back, relax and indulge in this all Tiger King episode!

* Marcey & Bede are back and no pandemic is going to stop them from podcasting !

* Wait, Bede wants to be known as WHAT from now on?

* What did both Marcey & Bede think of the show the first time they watched it?

* Who says that their mouth was literally gaping every five minutes while watching Tiger King due to how insane it was?

* Even though they know the subjects of the documentary are awful people, Marcey & Bede can’t help but be fascinated by them. Especially Joe Exotic.

* What do Marcey & Bede think of the accusations that Carole Baskin murdered her husband? Do they think she may have done it?

* Marcey & Bede dive into the many controversies surrounding the docu-series since it first dropped.