Here we go, the new era is here, the brand split is set and WWE has a lot to prove. After a fantastic PPV with Battleground, Raw had a lot to live up to, did they succeed?

Welcome To A New Era Raw 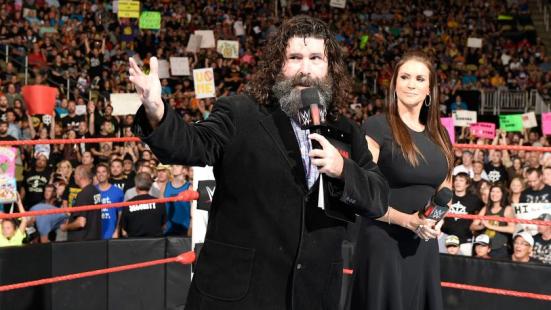 Commissioner Stephanie McMahon and General Manager Mick Foley welcome us to Monday Night Raw, and they bring out the new roster to the stage. Some big announcements are made with Seth Rollins being put into a big match at Summerslam for the brand new Raw main title, named after the WWE Universe … The WWE Universal Championship. Not a fan of the name but it may grow on me, and he will face the a new number 1 contender. To be determined by two Fatal Four Way matches, with those winners to face each other in the Main Event of Raw for the spot. Excellent booking in my opinion, they named the 8 competitors and the big surprise and what I am sure we were all hoping for Finn Balor! Also on the show Charlotte will defend her title against Sasha Banks. Huge matches set for Raw! A pretty solid opening, with the first of the Fatal Four Way matches on first. 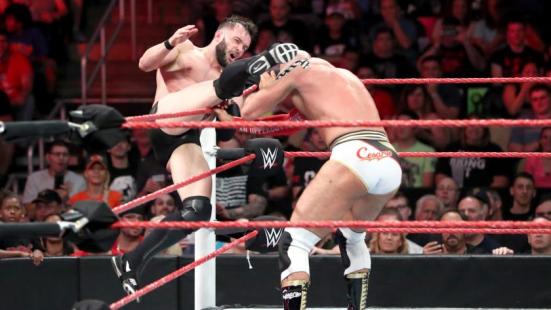 Four fantastic names to kick off Raw with, and Finn Balor on the main roster and opening Raw was just so surreal to see. This was a fantastic match, each one of them giving it their everything here. Who wasn’t on fire here? Balor and Owens going right for each other and Cesaro and Rusev going at it, down the track Owens and Rusev were working together. It was so unpredictable at every turn, and just a complete joy to see Balor mixing it up with these guys. So much potential for future match ups, and lots of in ring chemistry between each of the guys. Everyone had their shining moment, some close finishes and great kick outs. The end came when Balor hit the Coup de Grâce on Rusev to advance to the main event, I went absolutely nuts! What a way to start off Raw, and what a Raw debut for Balor.

I assume Britt Baker is a local talent, so well done to her for getting to appear on Raw. The big main roster debut for Nia Jax was handled pretty well, they had some nice build up for her and she looked fantastic. A short match, but it served its purpose to introduce those that may not watch NXT to a powerhouse of a woman. I thought she looked pretty good, short matches for her at this stage work well. Her power is shown and the fact she still needs work isn’t so obvious. I have no doubt she will only get better as time goes on, a fine match.

Chris Jericho vs. Sheamus vs. Sami Zayn vs. Roman Reigns

Another fantastic match up, and the crowd were really harsh towards Reigns. The boos are so loud and everything he does gets a reaction, I can see that he tries to use that but still isn’t quite sure how to. An excellent showing from all of these guys with Sami Zayn being the stand out and clear favourite to win. Side note – I am loving Corey Graves on commentary, I almost want to him to do it solo. Lots of great spots in this match, Sami had an incredible display yesterday and he didn’t look tired at all. What a worker he is! Chris Jericho looked badly sun burnt and I was distracted by that for some reason. I have to hand it to Roman for the big dive over the top rope, that used to have the crowd cheering. So many near falls and so much tension, it was fantastic storytelling and booking. Sami looked like he almost had the win on Roman, but sadly it was not to be and Roman picks up the win and goes on to the main event against Balor. 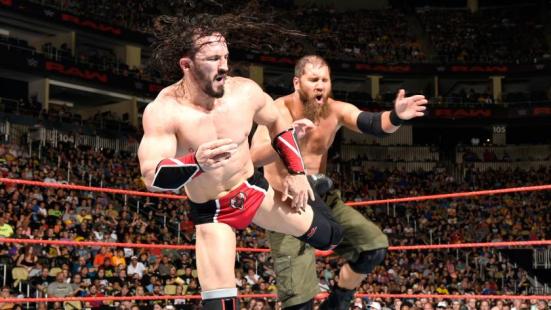 Curtis Axel gets given material and he runs with it, picked last in the draft and he has some words to say about it. Not bad. Neville makes his return from injury and he hasn’t missed a step. That facial hair will take some getting used to though! A nice back and forth match, not too one sided so that was good. Neville is just a delight to watch and I can’t wait to see what they have in store for him going forward. He hit a beautiful Red Arrow for the win, welcome back! 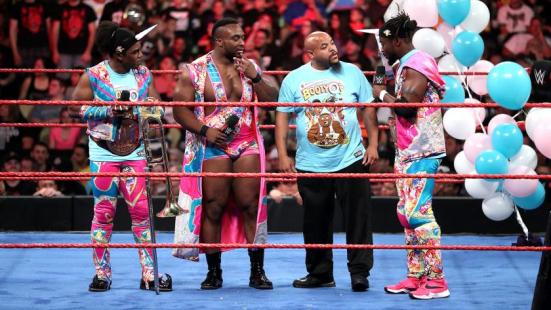 The New Day are the longest reigning Tag Team Champions and they are out to have some fun. Oh did you know that Booty-O cereal is now real and you can preorder it? Genius! They play a really fun video package to showcase how awesome they are, and then they find a mega fan in the audience to celebrate with them. Big E says Sonny Boy what is your name, and the dude is like Sonny Boy. This joke just kept going on, it was so funny I have no idea if that was scripted or a happy accident. The celebrations are short lived as The Club come out for the attack. They demolish The New Day and taunt the mega fan, folks I predict new champions are coming very soon.

Where do I even begin here? This is absolutely the best women’s match of the year, incredible stuff from both women who worked their asses off. The match was given a lot of time (as were most of the Raw matches) and they showcased what we all know about them, they are two of the best workers WWE has. So much back and forth action, lots of great moves and moments. Absolutely loved the Sasha moment where she took a page of Eddie Guerrero’s book and got Dana thrown out. She did a fake out with the title belt, acting like Dana was going to hit her, it was brilliant. Sasha took a nasty looking dive, but she seemed okay afterwards – reminded me of what Lita did to Trish in their big Raw match. Charlotte hit a top rope moonsault to the outside, picture perfect execution as well. The ending was so great, Sasha locking in the BanksStatement with Charlotte having no choice but to tap. 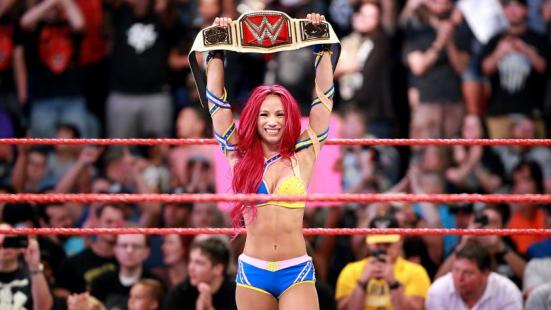 Yes folks, Raw crowned a new WWE Women’s Champion with Sasha Banks! A wonderful and well deserved moment, with raw emotion from Sasha. Her post match interview was wonderful, such a special moment that will get remembered. Well done to both women, they should be so proud! 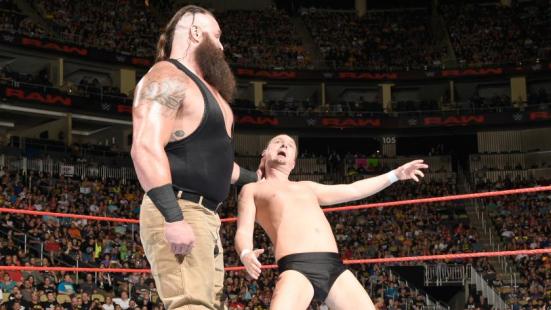 I have no idea why they had a quick interview in the ring with the local talent, it was awkward as anything. Braun Strowman has a bit of a new look, new music and a new finisher. He looked pretty good and I see a lot of potential for him, just depends how they book him. The squash match was fine, it served its purpose and it helps to build up Strowman. 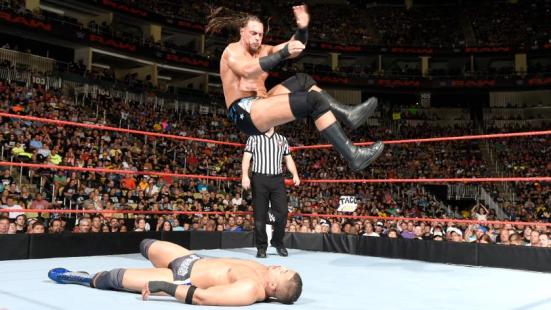 Lots of entertainment from Enzo and Big Cass before the match, talking about being Raw or something. I laughed and that is all that matters. They were both so over with the crowd it was pure insanity! The Shining Stars interrupted the pair, and I am shocked to see them actually. They did get drafted so there is that, and this wasn’t a quick squash match either. Some good back and forth action, a nice little showcase. Comedy capers ensued as R-Truth showed up in the ring looking for Pokemon (he was seen backstage with Goldie playing Pokemon Go throughout the show, I thought it was silly but on point), the distraction was enough for Big Cass to pick up the win.

You would think it was my birthday not Finn Balor’s, seeing him twice in one show … just amazing! I liked the small backstage interaction between the pair before the match. This was an excellent main event match, Finn Balor was on fire throughout, whether he was hitting offense or taking punishment. He made Reigns look good and kept up a good pace, I have to hand it to Reigns for keeping up. I honestly can’t understand those fans who say Finn is overrated or not good, they have to be kidding themselves there. I felt the booking was perfect for this match, storytelling was definitely there with Reigns having a lot to prove, but Balor as well. With it being his first time on the main roster, he had to make an impact and he certainly did. 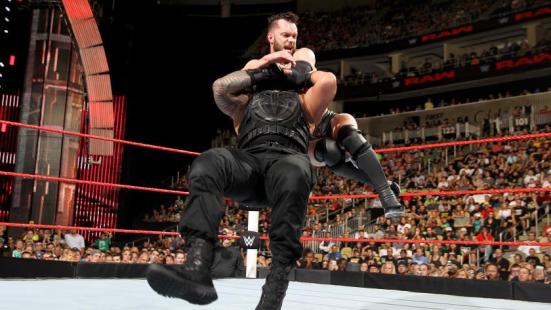 So many great moments and moves, near falls and intense spots, they really went all out after they already put on a show in their previous matches. The crowd certainly were not behind Reigns but he did have some fans there, you can’t argue he gets a loud reaction and that will prove valuable moving forward. So many times I thought the end of the match was coming and then a kick out. I was completely convinced Reigns would win, but then Finn Balor hit the Coup de Grâce once again and got a clean victory over Roman Reigns. Yes, a clean victory over Reigns. Finn Balor on his Raw/main roster debut, on his birthday won two matches clean and has become the Number 1 Contender for the new title, to go up against Seth Rollins at Summerslam!

Reigns is certainly getting punished this week, two clean losses, two nights in a row. WWE see the potential for a huge break out star with Finn Balor and the fact he had this big of a debut night proves how highly they think of him. Seth Rollins vs. Finn Balor has the potential to be one of the greatest matches we have ever seen. Summerslam is shaping up to be epic and we only have two matches officially booked for it. This episode of Raw may be the best one of the year so far, amazing stuff and if this is what we are going to get every week, I am going to be one happy fan! 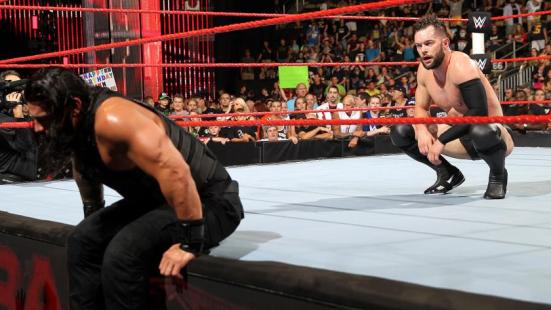