This week Raw kicked off with Stephanie McMahon calling out Vickie Guerrero.  After last week’s episode, this was to be expected.  After running her down, making Vickie go to her knees and beg, Steph told her that either she could be fired right there and then or win the right to keep her job in a match against her.  Eventually Vickie got made enough that she brought up her own family’s name and legacy.  This proved to be very interesting.  More on that later.

I’m lumping these two matches together because they were so short and really went in to one another right off the bat.  Harper won his match and Jey won his.  Not much to really say about the action.  It was good, but it felt like they were really saving the goods for Money In The Bank.  Understandable.  This was simply there to whet your appetite for the match and it definitely did that.  Their match at the PPV should be incredible. 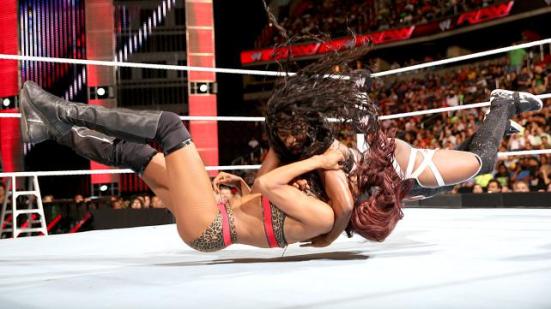 Naomi won the match.  Only reason why I know it is because Paige(who was on commentary) and her shook hands after the match and had a respectful stair down.  Why do I not have much else to say about this match?  That’s simple.  Cameron(who was also on commentary).  She just simply wouldn’t shut the hell up!  She talked over EVERYBODY.  And nothing she said brought a DAMN THING to the match!  You know it’s bad when even Michael Cole, one of the most professional commentators the WWE has, sounds legitimately annoyed with her and basically told her to shut the hell up so they could call the match.  Everything about Cameron is just horrible.  I can’t wait for her and Naomi to go on their own, Cameron to tank, and finally get the hell off of my TV screen once and for all.  She just fucking sucks.  Period.

It’s really awesome to see Bo Dallas getting over so well.  At this point, he’s a full fledge babyface.  There was even a “Let’s Go Bo!” chant going on!  This match was short, but the crowd being so firmly behind Bo made it all the better for me.  Dallas picks up the win with the Bo-Dog.  Afterwards, Bo had a fun spot talking about how Titus needs to Bolieve.

Before the match HHH revealed who else would join Rollins in the MITB match.  Kofi, Swagger, Ziggler, Barrett and RVD were all announced.  Out came Rollins, who cut one of his better promos so far in WWE.  RVD, however, took issue with what he was saying and challenged him to a match.  This match was the best one so far in the night.  These two put on an aerial delight of a match.  Eventually, Rollins hit his curb stomp and went for the pinfall only for Dean Ambrose to beat him down.  After Rollins high-tailed it, Ambrose got a mic and told Rollins and HHH that they had better add him to the MITB match, or he was going to show up anyway and ruin the PPV.  Excellent trio of segments.

This match was hands down the match of the night.  This isn’t the first time these guys have thrown down and I hope it won’t be the last.  Their chemistry is spot on!  There was so much back and forth action in this match!  They both nailed their best moves and the other would just keep coming.  Barrett eventually nailed the Bullhammer for the win.  Now, I hope WWE keeps giving the midcard titles matches like these.  They help build the prestige of the belt.

Now, normally I’d have a problem with a match like this.  It was basically a pudding match, first one in loses.  But hear me out. Vickie came out to the late, great Eddie Guerrero’s “Lie, Cheat, Steal” theme which was awesome to hear again.   Steph first sent Layla, Alicia Fox and Rosa Mendez out to take care of Vickie.  One by one, Vickie sent them into the mud/pudding/whatever the hell it was.  Steph pushed her in from behind and promptly fired Vickie.  Vickie, having nothing to lose, tossed Steph into the muck.  Steph hilariously had a lot of trouble trying to get out, constantly slipping back into it.  Eddie’s theme came on once more and Vickie even did the Eddie shuffle.

Why did I love this?  Because Vickie was legitimately leaving the WWE after nine years with the company.  She had been the butt of so many jokes in her tenure that it was great to finally see her get the last laugh as a babyface.  WWE really did right by her and it was a tremendous moment for Vickie to go out on.  I hope whatever is next in her life is as great as she deserves.

This was a very short match that deserved more time.  Both are solid performers in the ring and this bout was to help get people hyped for them in the MITB match.  Unfortunately, I don’t think anyone believes either of these guys have a true shot to win.  Jack Swagger won with the Patriot Lock.  Good match that should have been longer. 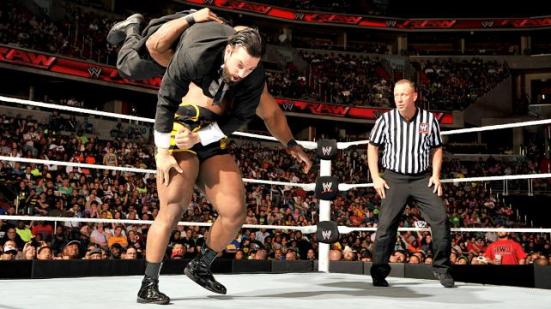 This was a squash match.  Pure and simple.  I am, however, dying to see Sandow finally blow his lid.  After the match, Lana distracted Big E while Rusev attacked from behind, destroying Big E.  Nothing more to talk about really.  It was what it was.  Meh. 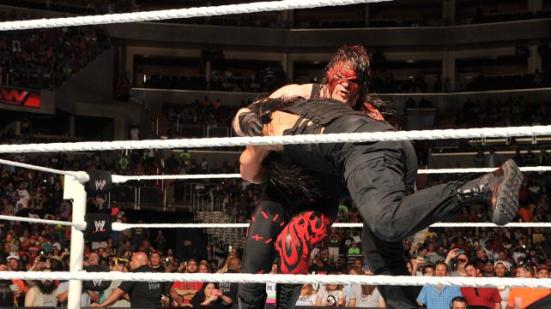 This match played similarly as Smackdown’s, only with Sheamus and Roman Reigns swapping roles.  It had all the action that the last main event did.  Sheamus picked the win up with a Brogue Kick to Cesaro.  Afterwards, Kane came out and laid out damn near everybody from both teams.  HHH announced Kane was now in the title match at the PPV.  Immediately afterwards, Reigns broke him in half with a vicious spear.  While not quite as good as the last match with these seven men, the addition of Kane added a lot of intrigue to the match.  If nothing else, I’m hyped for Money in the Bank!