With Contracted, director Eric England (Madison County) has accomplished something that hired government officials haven’t figured out how to do in almost three decades: he has made the perfect abstinence video. People looking to have sex after watching this film seriously need to have their heads examined. A body horror film that uses some pretty graphic effects as metaphorical answers to questions of sexuality, Contracted is one of those rare breeds of films that is both hard to look at and hard to turn away from at the same time. And when it comes to body horror, that is perhaps the best compliment I can give it.

Townsend (who looks like a young Claire Forlani) plays Samantha, a beautiful woman exploring new phases of love, notably lesbianism. She gets talked into going to a party thrown by her friend Alice (Macdonald), and while she starts off as the ‘shy girl in the corner,’ a few shots with Alice give her the gumption to have a one night stand with mysterious male party goer BJ (a great cameo by horror director Simon Barrett). The following morning, she wakes up in her bed feeling like she has a massive hangover. Little does she know, it’s MUCH worse. 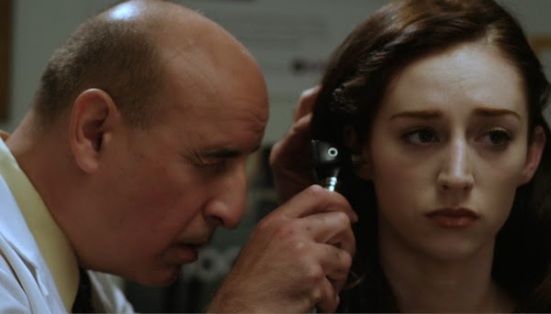 England cakes the film in a pallet of dread. This is evident with not only its ominous score, but also the subtitles that sometimes fill the screen (Day 3 of 3). You get the feeling that there is no way Sam is ever going to get out of the situation she’s in. And while some people will be angry at absolutely no signs of a cure, I respected England’s unwillingness to tell people what exactly is going on with her. If you want to see searches for cures, watch last year’s PG-13 screen adaptation of World War Z. All we see here are the results of what Sam has done and her graphically falling apart in front of our eyes. And, ohhh boy: does she ever!

Of course, we get the normal fingernails falling off scene. But even this seeming episodic moment is set up and paid off beautifully by England. Hair falls out, and eyes fill with blood. But Mayera Abeita’s make-up effects go even further than that, in ways that are sure to make you cringe (two words: vagina maggots). This entire descent into darkness is played beautifully by Townsend. There are times things like this happen to characters we could care less about. But the way England sets her up is remarkable. She’s an aspiring florist, doing the wait most of us have done, which is that ticket out of her parent’s house: the college acceptance letter. How can you NOT root for this girl to just stop feeling pain & move on with her life, instead of dealing with the pain by snorting heroin?

As good as Contracted is, there are a couple pretty big flaws with the story. By focusing on the horror going on within Townsend and not the life surrounding her, England has taken a big chance that unfortunately does not pay off. It is a psychologically horrific character study sans good human interactions. While Williams is very good as Samantha’s mother, their interactions at times bordered on ridiculously over the top. This could have been intentional on England’s part. But the problem with the film is that we just can’t tell. Another odd example of this are Sam’s visits to her doctor (Pla). The first one plays off pretty well. But by the time she goes back, it was just too hard to take that the doctor would let her leave his office looking the way she does. Why would it matter if her blood tests aren’t back if she has red eyes and missing hair?! Put her up in a hospital! The film’s point of view is never quite clear, and with Contracted coming in at a brisk 80 minutes, these problems were a bit ignored and England could have added ten minutes of answers. Not the least of which is who (or what) the hell BJ is.

Nonetheless, even with these flaws, Contracted is a very smart and insightful horror film. The acting is very good, and the build to its final scene pays off in a huge way, as without giving anything away, that particular scene is a complete jolt to the senses. The movie’s last leg is downright mean, even showing some signs of a slasher film being put in the mix. At the very least, Contracted is the work of a young filmmaker who has seemed to find his voice. If Contracted is what England has to say now, I can’t wait to hear his next speech.