Hey, everyone! Welcome to my 61st edition of my Bad Movie Tweet-A-Thon series! As you already know earlier this month here on SuperMarcey.com, I posted up poll with three bad movies and I said that whichever one out of those three films had the highest votes, I would watch and live-tweet for this column. Well, the votes are in and you all have spoken. For this 61st instalment of Bad Movie Tweet-A-Thon, you guys wanted me to watch and live-tweet… ROBOCOP 3! Is this one of the worst threequels ever made? Whose idea was it to make a ROBOCOP film that lacks the satire and violence of the previous entries? Read on and find out! Enjoy!

I know I’ve said this many times before and I’ll say it again: is it too late for me to *not* watch this film lol? #RoboCop3

Ah, ROBOCOP 3. The film that pretty much practically destroyed NIGHT OF THE CREEPS and THE MONSTER SQUAD director Fred Dekker’s career. #RoboCop3

Oh, that was for TV ad. That explains everything lol. #RoboCop3

The Amazon wars? I know that Amazon may not be perfect but if it’s worth actually going to war with. #RoboCop3

You want how you can tell when a sequel in a R rated franchise decides to go PG-13 and cater to kid friendly crowd? When child characters in it has an action figure of the film’s title character. #RoboCop3

Oh, geez. You think that demolition team would have given that family some actual proper notice before tearing their home down. #RoboCop3

Hey, C.C.H. Pounder! This film has slightly gone up a notch. #RoboCop3

Also you want to know the second reason how you can tell when a sequel in a R rated franchise decides to go PG-13 and cater to kid friendly crowd? The bad guys call people ‘slime’ instead of saying swear words. #RoboCop3

Nooo! How could that kid take down ED-209?! This is just plain wrong! #RoboCop3

“Get that” “Why?” “It looks expensive” Okay, I have to admit. That was a funny line. #RoboCop3

I like how ED-209 is clearly out front of that building but he isn’t in the next shot lol. #RoboCop3

Holy shit! Jeff Garlin and Shane Black are in this film! I’ve seen this film before but I forgot they were in it! Geez, who doesn’t have a small role in this?! #RoboCop3

So… This film is called ROBOCOP 3 and RoboCop still hasn’t shown up yet? What gives?! #RoboCop3

Oh, wait. Never mind. There he is! Finally! #RoboCop3 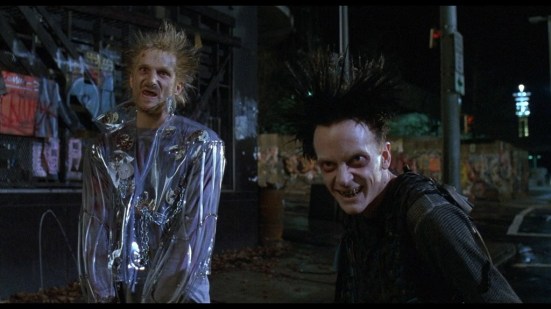 Well, that is guy is dead and that bit of blood on his shirt is the last bit of red stuff you’ll see in this film. #RoboCop3

Yeah, I’m sorry. If I saw a gang that dressed like these Splatter Punks do, I would laugh my arse off. #RoboCop3

Oh, hi RoboCop! It’s about time you showed up. #RoboCop3

Ahh, kid. Shouldn’t you be looking for your parents? #RoboCop3

Don’t care what anyone says, Rip Torn is such a cool name for an actor. #RoboCop3

Man, Bradley Whitford knows how to play slimy characters very well. No wonder he’s made a career out of playing them. #RoboCop3

So… How can RoboCop’s past memories from when he was fully a human show up on a TV screen?

NOOOOO!!! They killed RoboCop’s partner Lewis! She was one of the best characters in the series!!! How dare you, movie! How dare you! #RoboCop3

Oh, well. Even though they killed her off early, Nancy Allen probably takes solace in the fact that she doesn’t have to be crappy film any longer. #RoboCop3

The main villain is British. Why am I not surprised? #RoboCop3

Don’t ask me why, I think it’s hilarious that Stephen Root’s character is named Coontz

*Sigh*… So much lack of blood and proper good satire #RoboCop3

Cleary this Otomo character is based on Chow Yun-Fat when he was in the A BETTER TOMORROW films. I wouldn’t be surprised they went after him but he turned this film down. #RoboCop3

Wait, a minute. There’s a Christmas tree at this refugee camp? I shouldn’t be surprised. If Shane Black is around somewhere in a film, the film had to be set at Christmas #RoboCop3

I don’t know why one of these refugee guards has a bayonet on his gun, by I admire him going old-fashioned with his weapon. #RoboCop3

Otomo is a robot? That explains everything. #RoboCop3

Wait, am I still watching ROBOCOP 3 or THE LAWNMOWER MAN? Cause this scene feels like it belongs in the later. #RoboCop3 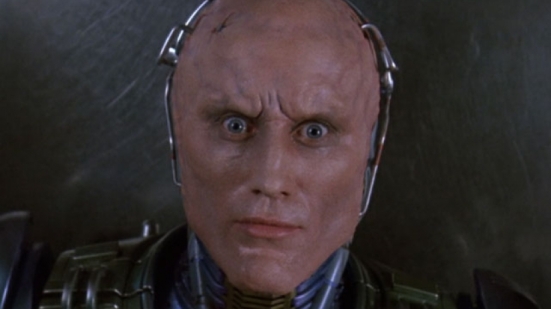 Oh, geez. They’re showing flashbacks to the first ROBOCOP film. That’s one thing a bad film should never do… Show clips from a better film in it lol. #RoboCop3

Uh, oh. The kid doesn’t realise that her parents are actually dead and RoboCop knows about it. This is going to be awkward when he has to tell her

“Do you have a ghost cop? A vampire cop?…” “No, but those would be great ideas for a spinoff film” #RoboCop3

Holy crap! RoboCop has gone full Terminator on the bad guys at the police station! #RoboCop3

Holy crap! Stephen Root is a spy for the bad guys! That’s… not really all that surprising to be honest. #RoboCop3 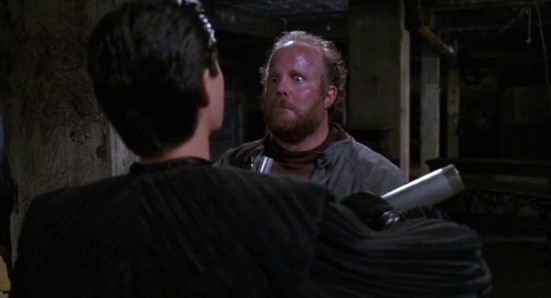 Wow! RoboCop just blew all those bad guys and… not a single drop of blood was spilled. Lame. #RoboCop3

I don’t know why RoboCop shot a huge hole in that door so that would be big enough for him to walk through, when he could have just open it. It wasn’t like it was locked or anything. #RoboCop3

I like how RoboCop just DGAF throughout this whole film. #RoboCop3

“What the language. There are children present” Funnily enough that’s the first demand that the studio wanted for this sequel before Fred Dekker made it. #RoboCop3

This scene of all the cops quitting and leaving the station mirrors exactly what audience did while watching this film. #RoboCop3

Okay, here we go. It’s RoboCop vs. Otomo. Mano to mano. Robot to robot. This better be good. #RoboCop3

Oh, great. Those Splatter Punks are back again. All the good guys have to do is slap them and they’ll wet their pants out of fright. #RoboCop3

Well… That fight between RoboCop and Otomo was… Underwhelming. #RoboCop3

You would think that with bad guys are attackingf both the refugees and the cops, the city would send in the national guard or army or something but nope! #RoboCop3

Oh, geez. RoboCop has got the jet pack on and he’s flying around taking out bad guys. I don’t know that to make of this. #RoboCop3

Oh! Otomo isn’t dead! Hopefully we’ll have a much better showdown with RoboCop this time. #RoboCop3

Well… That fight between RoboCop and the two Otomos was underwhelming. Again *Sigh* #RoboCop3

Did a nuclear bomb just go off in the bad guy’s building?! Cause it looked like it! #RoboCop3

Well, that’s the end of the film. While it’s not as bad as everyone has made it to be, it’s still not a very good sequel at all. #RoboCop3

I hope everyone enjoyed reading this 61st edition of my Bad Movie Tweet-A-Thon! Keep a look out later in July for my special 62nd Dinosaur edition, which I could be doing on one of the following three bad Dinosaur themed films: CARNOSAUR, TAMMY AND THE T-REX and THEODORE REX. Which one will it be? Vote on the poll which will be posted on SuperMarcey.com soon!