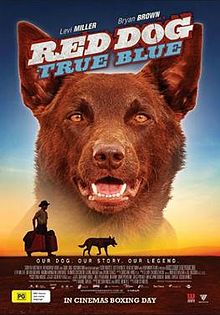 While many Australian films have enjoyed a much-needed resurgence at the local box office over the pass couple of years, there’s no question that one of our biggest homegrown hits in recent years was the 2011 family film RED DOG. After the film was released in cinemas, it went on to become a box office smash hit (grossing $21 million on a $8 million budget) and an instant Australian film classic that was loved by critics and audiences alike. It also went on to win the A.A.C.T.A. award for Best Film for that year. The film had a massive amount of staying power too since it was in the Box Office Top 10 for months on end. In fact it was still playing in cinemas even *after* it was released on DVD/Blu-Ray. So it’s no surprise that the filmmakers behind the film would want to make a follow-up to it, which has arrived in the form of the prequel RED DOG: TRUE BLUE. Was it as successful as the first one was? Read on and find out!

Set in 1969 (two years before the events of RED DOG) the film tells the story of a 12-year-old boy named Mick (Levi Miller) who, after the death of his father, is sent by his mother to go live on a cattle ranch in the Pilbara region of Western Australia with his Grandpa (Bryan Brown). Mick finds it very hard to adjust to living life on the ranch with his Grandpa and the oddball group of workers, so he tries to make the best of it but he wishes that he was back home. However things change one day when after a severe storm, Mick finds a red kelpie pup stuck up in a tree. After rescuing him, Mick decides to keep the pup and names him ‘Blue’. However what Mick doesn’t realise is that his friendship with Blue will change his life forever and would go on the become an Australian legend.

I must admit there was many reasons why I was curious about RED DOG: TRUE DOG, one of the them being that it’s a prequel. Even though a lot of people say that sequels are hard to make but I would wager that prequels are probably even more harder to get right. At least with a sequel you can expand upon both the characters and story that were established in the first film but with a prequel, you have to set up on how the characters became who they are and how they ended up where they were prior to the events of that first entry. So how did the film turn out? While RED DOG: TRUE BLUE isn’t on the level as the first film was, it still a hugely entertaining prequel that I had a really good time with from beginning to end.

I believe the reason why I think that this prequel turned out as well as it did was because it is made by the same creative team that worked on the first film with director Kriv Stenders and screenwriter Daniel Taplitz. They were able to recapture all the aspects that made the first one such a hit. Stenders does a really good job once again with his direction. While his direction isn’t as kinetic as the approach that he took with the first film, it still brings that same whimsical style and tone to it nonetheless. The script by Taplitz was quite well written and I liked the clever little touches that he brought to some aspects of the plot. Particularity the very meta approach at the beginning of the film, which I found rather enjoyable. When it comes to the acting side of things, the cast all did quite well with their roles. Levi Miller (who played Peter Pan in the 2015 film PAN) was really likeable in the lead of role as “Mick”. His character’s journey through out was quite engaging and his friendship with the dog “Blue” (played by Phoenix) is definitely the heart of the film. Honestly without it, the film probably wouldn’t have been as good as it was. 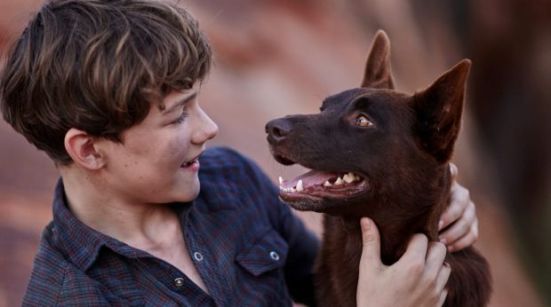 While it’s a role that we’ve seen him play many times before, Bryan Brown was still really good as “Grandpa”. He brings elements to the role that make him a more layered character than your typical tough Aussie farmer. British export Jason Isaacs was quite solid with his performance as well and he delivers a really believable Aussie accent too, which as we know is not easy. I do wish that he was in the film more but he was used appropriately nonetheless in the type of role he was playing (I could tell you what that is but it would be a bit of a spoiler). Also the supporting cast (Hanna Mangan Lawrence, John Jarratt, Steve Le Marquand etc.) were solid, Cezary Skubiszewski’s score was really good, the cinematography by returning D.O.P. Geoffrey Hall is absolutely stunning (he knows how to capture the picturesque quality of the Aussie outback beautifully) and the ending was really moving.

In terms of negatives, there are some aspects that I found to be quite flawed. One of them surprisingly being our title character of “Red Dog” himself (or “Blue” as he is named in this film), who is played by Phoenix. Don’t get me wrong Phoenix is a loveable pooch, I just didn’t find him to be as memorable of a onscreen presence as Koko was in the first RED DOG film. It probably doesn’t help that the filmmakers didn’t really focus on him as much as they do with the film’s main human character “Mick”. So “Blue” does feel rather sidelined a bit at times. I know that this a really weird criticism to have but I would have liked to have seen more of him. Also the story was a bit structurally uneven at times, some of the supporting characters could have been more developed and it does lack a bit of the freshness that first film had.

Overall while RED DOG: TRUE BLUE won’t go down as quite an Aussie film classic as RED DOG was, it was still a surprisingly strong and crowd pleasing prequel that was definitely better than it had any right to be. It did still capture all the humour, adventure, heart and Aussie spirit that made RED DOG such a joy to watch. If you’re someone who really liked or loved the first film, I think that you’ll definitely enjoy this prequel for sure. It’s a film that the whole family can enjoy.