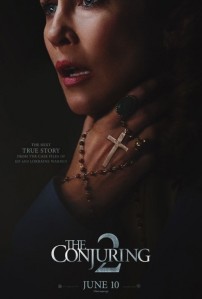 In 2013 THE CONJURING crept up into cinemas and took audiences on a frightening ride, and raked up some big bucks at the Box Office. It gained mostly positive reviews, and James Wan created a horror film that felt like the classics such as THE EXORCIST and not the gore and blood filled fests that horror seems to be about lately. The ‘based on real events’ film was so popular that a spin off film ANNABELLE was made, not doing so well and was panned by critics. Despite that, James Wan and writers Carey and Chad Hayes decided to return to this world and make a proper sequel. The characters of Ed and Lorraine Warren (Patrick Wilson and Vera Farmiga) bridge these two films and continue their story.

Taking place in 1977, the Warrens are investigating the case that would see them become house hold names with the Amityville haunting. As we find them they are holding a séance with the Lutz family and Lorraine sees a frightening vision that will haunt her and cuase her to even questions her own beliefs. The pair are thrown into the spotlight and are forced to defend the case on whether it was a hoax. The pressure becomes a little too much and the vision Lorraine had brings her to ask Ed that they quit and stop what they are doing and take a rest. Meanwhile in England the Hodgson family start to experience strange happenings in their house, and daughter Janet (Madison Wolfe) is the one affected the most. What is happening to the Hodgson family and will the Warrens be able to help?

THE CONJURING was an impressive film, it created a haunting atmosphere and a build up that worked extremely well. It was a scary experience and at times quite unsettling, the characters were developed exceptionally well and the script was very sharp. A true follow up surely could not have been easy, with a lot to live up to the Hayes and Wan had their work cut out for them. THE CONJURING 2 is not only a worthy follow up, but a rare occurrence where the sequel lives up to the original. What made the original so memorable and terrifying works again in the sequel but without feeling like the viewer is suffering from deja vu. We have the atmosphere, the developed characters, a sharp script and some terrifying scares. It even added upon some things the original did not really touch on, and the fact that people thought these events were hoaxes. The scepticism that people had is touched upon, but whilst not developed a lot it was refreshing to have that acknowledged and played upon.

Being that this case was ‘based on true’ events, you can imagine that liberties were taken in telling the story. As the Warrens were set up previously and their story is being told as well as the hauntings, they are back again. In real life however the Warrens only spent a day at the Hodgons and really didn’t have anything to do with the case. Interesting that this is the story they chose to go with to continue on with, maybe Amityville has been done too much so they only touched on it briefly. The person who investigated the case and was with the family the most was Maurice Grosse (played by Simon McBurney), and this is shown in the film but if you didn’t know any better you would think the Warrens did most of the work. It is a shame that so much was changed but it had to if you want Ed and Lorraine to be a part of the story, and it even adds in a little more to bridge it completely.

With the lingering subplot of whether these cases are hoaxes, some scenes were done extremely well to offer up that doubt. A brave move and it is something they should have done more of, as the film moves along the crazy parts start to feel a lot more real and the sense of whether it could be fake is pretty much gone. It also portrays the character of Anita Gregory (Franka Potente) as a bit of a villain solely for questioning the family and whether they made it up for their own benefits. This was perhaps its weakest part, as most everything else really worked in the films favour. If her character were handled differently and given a little more to do, this whole arc could have been a lot more interesting.

The film is quite unsettling and maybe even more so than the first one, the haunting escalates slowly but each time it hits harder and harder. This family is completely tormented and at times it is difficult to watch especially where Janet is involved. There is a mystery about why this family was targeted and the unveiling of it works extremely well, they lay out the clues and are sure to reveal them as time goes on. The other plot points such as Lorraine’s visions are truly terrifying, a lot of focus was put on them and for good reason too. James Wan manages to create some creepy objects and he does not hold back here at all, if you thought Annabelle the doll was frightening the Nun may have one upped it. The finale much like in the previous film is a little over the top, however this time around it felt like it was handled a little better. 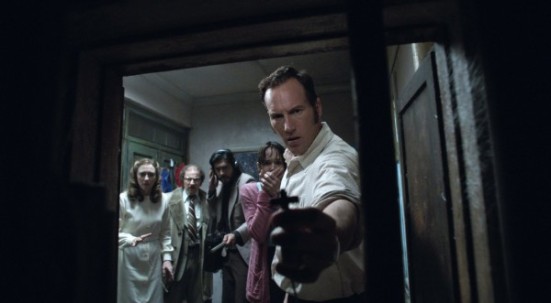 Performance wise once again Patrick Wilson and Vera Farmiga completely own their roles as the Warrens and share the perfect type of chemistry together. Frances O’Connor who plays Peggy Hodgon is fantastic, an underrated actress and it was great to see her on screen again. Peggy is not a complex character, however Frances plays her with such force that we do find ourselves paying full attention to her and really caring about her and the family. The stand out is Madison Wolfe, whose portrayal as a haunted young girl is frightening as much as it is heartbreaking. She made use of every scene and every moment to make it mean something, all the while going back and forth between the calm and the storm, what a performance. Simon McBurney was also quite interesting, his intentions never quite clear but that aura of mystery about him made the character someone to watch.

James Wan is a modern horror genius, he has crafted some of the greatest horror films of the past 15 years and each one is as different as the next. Whilst THE CONJURING and THE CONJURING 2 share a lot of similarities they really are two very different films. The Hayes have written a great script with lots of intriguing ideas, and the execution of them here has just elevated it. Despite its flaws THE CONJURING 2 is a highly successful film, it packs a mean punch and does not hold back on the scares. Another modern classic that is sure to be remembered in years to come, thank you James Wan.