Biggest Money In The Bank ever or so WWE has been saying, did this one live up to the hype? Not sure it did but there was some interesting events, and this is going to set the stage for how the summer and eventual brand split may go. Let’s get to the show shall we?

Due to having to attend an appointment at the hospital I was unable to watch the show live, and I did not watch the Kick Off Show.

I did not watch live, yet the WWE Network was extremely choppy for this match and it kept freezing up. I did catch Enzo and Cass doing their promo and I was highly entertained. When I could actually watch and see the match it was pretty good. There was some good spots and I liked the spontaneous tags and of course who doesn’t love it when Big Cass comes in and dominates. He didn’t get a big chance to shine but my gut feeling tells me he will be pushed as a singles guy. Things kept getting messy but when you have four teams competing it will get like that. I didn’t think The Vaudevillians had much time in the ring, which was a shame. The end though … I was sure that Karl Anderson made the tag yet Aiden English was pinned. Sorry that is pretty poor booking. The New Day retain and I think they will probably break a record.

This was a Kick Off Show match, it was pretty boring and really amounted to nothing. Dolph looked too much like HBK but he was there as a punching bag for Corbin. Corbin looked like he couldn’t care less, and Batch’s nickname Mr. Excitement is oh so relevant. I wouldn’t be surprised if he isn’t on TV much. I have no idea what they are doing with Dolph but it is a shame he is so low down the card now. He hasn’t done anything they just don’t know what to do with him. Boring match that was sloppy, no interested or investment. END THE FEUD ALREADY! 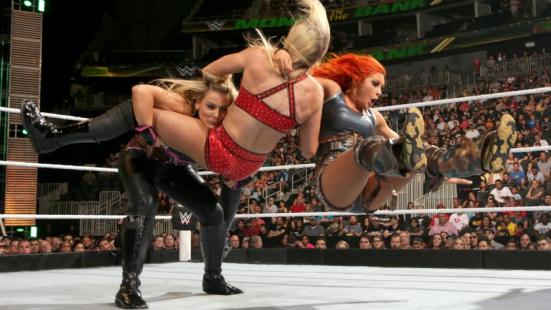 This was an okay Tag Match, nothing special which is really a shame because these are some talented women. Dana Brooke looked a lot better than she has recently, she wasn’t kept in the ring too much which helped. Charlotte was in more and it was up to Nattie and Becky to really bring the fight. I expected more from this match, not sure why they have dropped the ball with the women now. The end came when it looked like Nattie may get Charlotte to tap but Dana broke it up and threw Becky into Nattie. This gave Charlotte the opening for Natural Selection and the pin. Post match though, Nattie snapped and attacked Becky. At least something is happening in the division and a story is brewing. Considering Nattie can’t win on the big shows, it makes sense.

Well this was Apollo’s best match since debuting on the main roster but it was still a fairly bland match. He hasn’t really done any of those awesome spots he was doing in NXT and he still has no idea how to tell a story in the ring. Sheamus carried this match as best as he could and it was watchable. I liked that Apollo hit the moonsault off the apron onto Sheamus on the outside, we need more of those spots from him. Sheamus hit his finisher from the second rope, Apollo kicks out and rolls him up. No issue with the win, you need to build the new talent and this feud can continue. But Crews just did not really sell anything and he just has so much to learn.

A match we never thought we would see finally arrived, and it did not disappoint. This is not what I was expecting at all and I have to say this was booked extremely well. The start of the match was awesome because the crowd were crazy and definitely behind Styles even though he’s the heel. I loved how AJ had Cena’s number through out the match, he could counter his moves and really looked strong against him. Cena almost looked like a broken man, someone who had lost his magic and this worked extremely well. A story was being told, and told well. We had submissions locked in and finishers and they each got out of them, it was intense. I just loved every second of this match, I did not want it to end. I am liking this Cena and I hope going forward he isn’t Super Cena. This makes things more interesting and actually tells a story. The ending came when the ref got knocked by Styles as Cena was hitting the AA. The Club snuck in and attacked Cena, placing Styles on top of him for the 3 count. No clean win, I am going to guess this feud is lasting the summer.

The Money In The Bank Ladder Match: Chris Jericho vs. Cesaro vs. Sami Zayn vs. Alberto Del Rio vs. Kevin Owens vs. Dean Ambrose

As expected this was a crazy match, lots of interesting spots and they tried to do things differently than previous MITB matches. I like that this was kept to six men and it’s six men who all could win. At least on paper, going in I expected only two had a real chance and that was Owens or Ambrose. With how this was booked each man appeared to have that briefcase in their grasp and even I was tricked into thinking it could go another way. Some of the spots looked really painful, I wouldn’t be surprised if there were some injuries after this. During the end Alberto Del Rio flew off the ladder and into the ropes, it looked like he landed badly and reports state he was helped to the back. Hoping it isn’t serious, the crowd was very much into him chanting “Si Si Si” and I want him as a face. Change the character finally! In the end as expected it came down to Owens or Ambrose and Ambrose got the win. My first reaction – he’s cashing in later.

Lana introduces her man and Titus has his sons at ringside, this was an okay match nothing special though. They hit some nice spots and Titus looked like he stood a chance a few times. This feud hasn’t had too much build up so I didn’t care all that much. Not sure if it will continue, I just didn’t get invested to be honest. Rusev made Titus tap and he of course insulted the kids and wished them a Happy Father’s Day and I laughed.

For a big main event match this had some pretty poor build up, not sure why either. Creative and Vince are convinced we need Reigns as a face even though he’s getting booed out of every building. Not turning Rollins face was a stupid move as well, people want to cheer him. Anyway for the poor build up these two delivered a great match, it was booked quite interesting and maybe just maybe we may see the change? Roman dominated the match at first and this for me made sense, Seth back from injury having a lot to prove. But the tide started to change and Seth started getting in some offense. The match really picked up from here and Seth felt like he was booked as the under dog and the face, giving me hope change will happen for Roman. There were some really nice spots and some brutal spots, with Roman spearing himself through the barricade after Seth dodged it. This led to the finish where Roman kicked out of Seth’s pedigree but Seth managed to bring down Roman and got the 1,2,3 and once again became Champion.

Not for long as Ambrose comes out and decides he is cashing in! Just as I had suspected, and within a few minutes he’s cashed in hit Dirty Deeds and pinned Seth. So in the span of a few minutes all three Shield members were WWE World Heavyweight Champions! I think this three way feud may last the summer, it’ll be intense no doubt. Happy to see Ambrose changing this up and becoming Champion, curious to see where this leads.

Overall the event delivered on the big matches but the smaller ones were not so good. A mixed bag in the end but I enjoyed the three big main matches, they were fantastic. Definitely worth a watch though, maybe skip a few of the lesser matches though.