Welcome to The Super Network’s new weekly review for NXT! Yes that is right folks, we will be reviewing the show on a weekly basis – along with Raw and Smackdown.

The show kicks off with William Regal introducing and welcoming us back to NXT. He states what we will be in store for, including the debut of Shinsuke Nakamura on the weekly program.

Another weekly show debut with Austin Aries, and I am not at all complaining. I am a big fan of his and I really liked his match with Baron Corbin at NXT TakeOver Dallas. They both looked really good and it was probably one of Corbin’s best matches. This was a good match, a nice showing from both of these guys, but naturally I was more focused on Aries. I haven’t seen a lot from Dawkins, but there is a talented guy there. These two weren’t the best fit in the ring, however they actually made it work and by the end I enjoyed the match. Just give me Aries every week, I’ll be more than happy with that.

Backstage briefly with Samoa Joe, when asked what is next after losing to Finn Balor, he said nothing has changed, he is a warrior. But as for whats next, he’s taking on Apollo Crews next week.

No Way Jose … Next Week 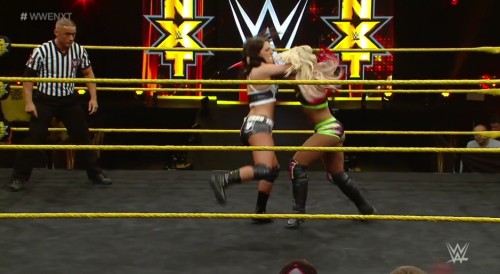 Tessa is wearing a Summer Rae top for some reason, and she is the daughter of Tully Blanchard … Anyways, solid match here. Alexa Bliss is a lot better as a heel, it seems to come more natural to her. She has improved in the ring, which is good to see. I was more interested in Tessa, as were the crowd it seems. She got some chants, and she was very vocal in the match, I liked that a lot. This is one woman that I definitely want to see my eye on, there is a lot of talent there and a longer match must happen for her. Disappointing she didn’t win but that does open up another potential match between the two.

Backstage with Finn Balor, he gets asked who he sees as the number 1 contender. He says basically he is a fighting Champion, and when asked about Nakamura, he said he’s ready for him. 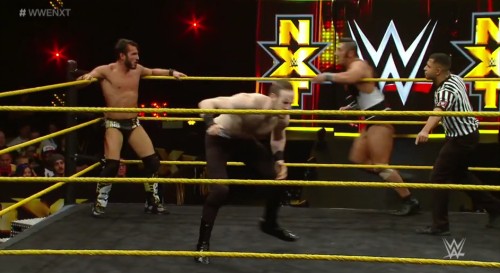 This was a really fun match, and I have to say my attention was mostly on Johnny Gargano who is incredible. He hit some nice spots in this match, and English and Gotch really put these two over really well. I hope Johnny and Tommaso work together more, I like this team and I like seeing them in NXT. The Vaudevillains will likely not be used much on NXT going forward, as they are now on the Main Roster and in the Tag Team Number 1 Contenders Tourney. Tag Team wrestling can be extremely exciting and this match was exactly that. The matches for this episode of NXT are not long ones, but these four guys made every second count and as a fan I was extremely happy.

Backstage with Tye Dillinger, who kind of hypes his match with Nakamura, basically says he intends to send him back to Japan. 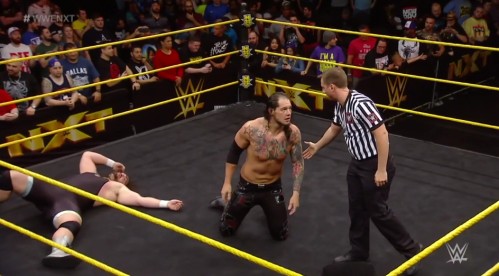 Not much to say here, just a short showcase for Corbin who will likely not be on NXT much anymore after his big main roster debut. This I believe was filmed before then so no mention of that except for the fresh commentary. Would love to be able to say more, but this could have been a match where you counted to see how long it would last, like the old days of Corbin.

We are back with the new tag team champions American Alpha, they get nicely put over by Enzo and Cass. They challenge them to a tag match for the future, titles don’t need to be on the line. I liked this little segment, puts over the champs and sets up an exciting future match. 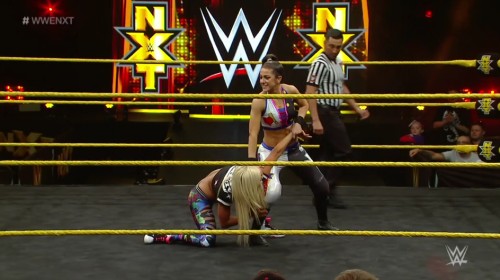 It is weird seeing Bayley without the NXT Women’s Championship, but I can’t really complain with Asuka having it now either. I love Bayley’s ring attire paying tribute to Dusty, a nice touch. Liv Morgan looks way too much like Alexa Bliss, she may need to change her look a little. This was a fine match, a nice Bayley display and the crowd chants were a lot of fun (Bayley’s gonna hug you!), her smile has left either. Liv Morgan has a lot of potential, she wasn’t bad but she has a lot of room for improvement and if she works hard it’ll show quickly I think. Love seeing Bayley, and they had a pretty decent match. Bayley gets on the mic and thanks the fans and she vows to be champion again, nice touch.

Next week American Alpha takes on Enzo and Cass.

Now this might have been a short match but it was very entertaining, Dillinger really played to the crowd in this one and they really played it back to him. Chanting ‘he’s an 11’ about Nakamura really worked him up and it was great! Nakamura really played to Dillinger as well, and they had some good back and forth chemistry. This is a good way to introduce Nakamura to those who may have missed TakeOver Dallas or are just now tuning into NXT. It gave a good round up of what you can expect from him and just how much fun and inventive he is in the ring. He has got to be one of the most charismatic guys ever, and against someone like Dillinger it really hit home. I would love to see these two have another match some time with a bit more time given. I really enjoyed this match.