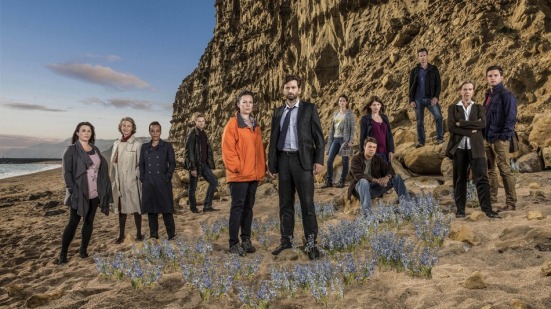 So this weeks episode was a lot better than last weeks, and it certainly gave us a lot more development. The emotional heartstrings were certainly pulled. We made more ground with Sandbrook and things are going to get very heated next week with the Joe Miller trial.

First up we had the reunion (brief) of Ellie and Tom, with Tom refusing to see his mother since the arrest of Joe. The reunion went as well as one would expect, there is a lot of resentment there and it is clear Tom doesn’t want to accept things with Joe. This episode featured more of Tom, who went to Joe’s defense to ask to testify. I am expecting we will see this next week and what will be said should be interesting, is he going to try help his Dad or will he dig the knife deeper in and seal Joe’s fate?

Ellie was clearly glad to see her son, but are we going to see them together again? Hard to say, Tom’s intentions will likely be more clear in the next episode. With nothing much going for her now, Ellie is determined to solve the Sandbrook case. She has set up camp and the investigation continues. There is more revealed about the relationship between the neighbouring couples, affairs look like they were happening with Lee and Claire likely seeing the murdered girls parents. Whether they each knew hasn’t been made clear, but something is definitely up.

Suspicion is really on the father, his alibi seems to be broken, and his attack of Lee seems like what a grieving father would do but I believe there is more to his actions. Ellie put into question whether the niece was still alive, her body wasn’t found and the father perhaps was even seeing her? I am still assuming it was the father and Claire, but it may not be that simple. The end of the episode saw Ellie and Hardy make a disturbing discovery of a furnace and what we assume was a body burned in there. Lee was connected to the place, but my feeling is he is innocent.

Scenes I really liked within this episode didn’t have anything to do with Sandbrook or even the Joe Miller case, but with Jocelyn, the woman is determined to win this case. More was revealed too between her relationship with Sharon, the anger comes from when they worked together. With Jocelyn refusing to take Sharon’s sons case, and then taking this one on, the tension is running high. They are now fighting each other more than anything.

The wrap up with Susan Knight was really she is just a horrible woman, Nigel likely had nothing to do with anything. Beth is struggling with what to do to honor Danny, and Mark is trying to bond with his new daughter. Nothing much to add there.

While I know a lot of people haven’t been impressed with this season and the ratings have fallen, I am enjoying it. Taking this in a new direction was very gutsy. Where will the show go from here? I hope up.