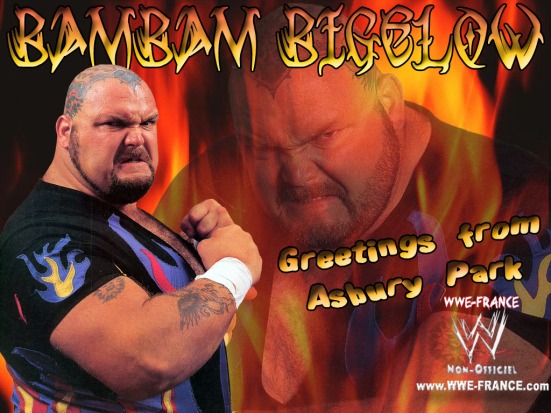 This is the first of a new weekly column where we shine the spotlight on a selected professional wrestler. Whether from the past, present. This week we focus on one of the best big men to ever grace the business, the late great BAM BAM BIGELOW!

Bam Bam Bigelow, the man fondly remembered as the Beast from the East was born Scott Charles Bigelow on September 1, 1961 in Asbury Park, New Jersey. Bigelow was trained by Larry Sharpe at the famed Monster Factory in New Jersey, and from there went on to have an amazing career that spanned twenty one years. He left his mark in every major wrestling company that has ever graced a television screen, and paid further dues in other territories as well capturing several championships. The legacy he left is being remembered as without a doubt one of the most talented, most agile big men that ever stepped foot inside a ring. Marveling at what he could pull off in a ring has personally never grown old for yours truly.

Bigelow debuted in 1985 as a brutally powerful heel in the Memphis territory ran by Jerry Lawler and Jerry Jarrett. His claim to fame during this time was feuding with the then champion Jerry Lawler, also it was here that Bigelow earned the “Beast from the East” moniker that would become a staple of his character throughout his entire career. In 1987, Bam Bam enjoyed a stint in the Continental Wrestling Association where he teamed with former rival Jerry Lawler to feud with Austin Idol & Tommy Rich. From there it was all uphill for The Flamed Wonder.

Bam Bam Bigelow made his initial debut in the then World Wrestling Federation in 1987 to much flare. His first angle was that of being a desirable commodity for many heel managers of the day to get their hands on, in what has become known in the history books as the “Battle for Bam Bam.” This angle ended with Bam Bam on the babyface side of things as he quite ceremoniously told each manager that vied for his attention to stick it where the sun doesn’t shine. He became a fan favorite when the crowds were able to get a taste of his prowess in the ring, through early feuds with the likes of Nikolai Volkoff. Bigelow’s most noteworthy accomplishment in his first tenure in the WWE was his impressive showing in the 1987 Survivor Series elimination match, outlasting Hulk Hogan before being eliminated by Andre the Giant.

Between 1988 and 1992 Bam Bam wrestled for several promotion and captured several championships in the process. Bigelow had a brief stint with Jim Crockett Promotions, during this time he battled Barry Windham for NWA United States Heavyweight Championship. He made significant waves in several different Japanese promotions, winning the IWGP Tag Team Championship alongside Big Van Vader.

In 1992 Bam Bam Bigelow returned as a heel for a significantly longer run in the WWE, defeating the Big Bossman at his first pay-per-view back, that being the Royal Rumble. Several memorable moments of his career happened during this time, including forming an alliance with Luna Vachon to team with superstars like Tatanka and Doink the Clown, the latter of which he defeated at WrestleMania X. The following year at WrestleMania, Bam Bam got a up close and personal taste of what made the event so special in those days, that being celebrity involvement. At the 1995 Royal Rumble, a highly publicized feud began between Bigelow and former NFL linebacker Lawrence Taylor. The match itself to me was one of the more entertaining in ring competitions involving a celebrity I’ve seen, with Lawrence Taylor coming out victorious. In 95, Bam Bam wrestled his last match in the WWE at the Royal Rumble, losing to Goldust.

Between 96-98, Bam Bam hit his stint that I look back at most fondly…that is his run in the revolutionary promotion ran by Paul Heyman, Extreme Championship Wrestling. During this time we saw over the years what I consider to be a legendary, and one of his best ongoing feuds, with ECW original Taz. We saw many memorable WTF moments through this feud, like Taz being slammed through places like ring and the ramp by the Beast from the East. These are the types of things that made me a fan of professional wrestling, because I ask you…where else do you see this? Bam Bam was also a member of the Triple Threat faction alongside Chris Candido and Shane Douglas, hell was indeed raised. Bam Bam eventually turned on Shane Douglas, and went on to win the ECW Heavyweight Championship in October of 1997, eventually dropping it back to Shane Douglas in one of the best matches of his career. From there, Bigelow went on to win the ECW World Television Championship through rekindling his feud with Taz, he defended the title against the likes of ECW legend Sandman, and lost the title to Rob Van Dam. Bam Bam feuded with Taz until his exit from the company in 1998.

In 1998, Bam Bam started his run with World Championship Wrestling that lasted until the company went under through being bought by WWE owner Vince McMahon. Through this run, Bam Bam joined a stable known as the Jersey Triad alongside Diamond Dallas Page and Chris Kanyon (RIP). In the final Starrcade PPV, Bam Bam was defeated by Mike Awesome in an ambulance match. His final feud in WCW was against Shawn Stasiak, which was featured on the final WCW pay-per-view Greed, and the final episode of WCW Nitro the following week.

In 2002, Bigelow spent the remainder of his career appearing in several independent wrestling promotions. He made several appearances in USA Pro Wrestling, winning during his tenure the USA Pro Heavyweight Championship twice. Bigelow wrestled his final match in the American Combat Wrestling Promotion in tag team action, teaming with Ralph Mosca against Legion Cage and Marcus Hall.

Scott Bigelow passed away on January 19, 2007, survived by three children with his ex wife Dana Fisher. In a nutshell, Bam Bam Bigelow means a lot to me as a symbol of what made me such a fan of professional wrestling. He was a larger than life character, made all the more special by being a big man that was able to do amazing things in the ring that isn’t in the arsenal of even half the big men to ever grace the ring. As a human being outside the ring Bigelow seemed like an ace individual as well, donating to charities through his ‘Hot Rodz’ auctions. He was also known in 2000 for suffering several burns on his body after saving three children from a house on fire near his own home. Every wrestler deserves to be praised for what they put their bodies through to entertain the fans, but if a wrestler was talented enough to warrant a random face like me revisiting his matches at the very LEAST once a month, he deserves a tribute and being dubbed a legend. Bam Bam was a freak of nature, a man who broke molds, a man who knew what it took to make an impact and he made a career out of using those talents in the best way he could. Bottom line, long live Bam Bam Bigelow.

One thought on “[Wrestling] Tribute To: Bam Bam Bigelow”