As a big fan of Japanese cinema and their horror genre every year for 31 Days Of Horror I need to have at least one Japanese film, previous years films for the challenge have completely blown me away on different levels such as Pulse (2001) and Naked: Splatter Blood (1996). For Day 17 I picked a film I had on a previous list for 31 Days Of Horror that I did not get to for that year and I wanted to finally see this early Sion Sono film Suicide Club (2001) for so long, finally I made it to the film as the challenge is now over the half way point. Having finally seen the film, yes it was worth the wait and perhaps a lot more bizarre and surreal than expected.

The film begins with over 50 school students throwing themselves together in front of a subway train, the brutal act is not a one off occurrence as others begin to do the same thing with a nurse throwing herself out the window. Detectives start to investigate the mysterious suicide deaths and a person who simply calls themselves ‘The Bat’ informs them of a strange website that seems to be associated with the deaths. The suicide events have similarities to each other with something truly horrific found at the scenes (besides the bodies) the detectives start to uncover something that isn’t as simple as they’d like it to be.

This is a very strange film, Sion Sono is a creator who has a very distinct style and tells these bizarre stories that are compelling and horrific all at once. Suicide Club is a brutal film, there is a lot of blood and there is a lot of death, but there is a cheerful element in the film that raises it to levels of feeling like the audience is having a dream and a nightmare at the same time. There is a level of ambiguity to the story and perhaps exactly what Sono was trying to say, is it about Japan’s suicide rates of the time? Is it trying to say how all consuming media can be? Is it both? Is it none? That’s the beauty of a Sion Sono film, the audience can really make up their own mind of what it has to say and still thinking about the film long after it’s finished. Sono has only gotten better as a filmmaker since this film, with more of a refined style and tone that wasn’t quite there fully with this but he certainly left a hint of things to come with his films. This isn’t an easy film to recommend due to the subject matter, however those who do like Japanese cinema and have seen some of Sono’s films should track this one down. 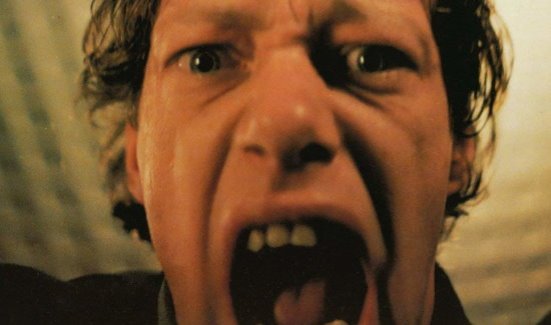 31 Days heads to Austria for Day 18 as the worldwide horror journey continues, Austrian horror films are memorable with previous 31 Days Of Horror film Goodnight Mommy (2014) and the films of Michael Haneke. Diving into Angst (1983) knowing not much at all about the film was quite the experience as this is one of the most brutal and difficult to watch films that I personally have seen. Think along the lines of Henry: Portrait Of A Serial Killer (1986) in terms of brutal and difficult to watch, however the style used here to tell the story only adds to how difficult and hard hitting the film is. Angst is not for the faint of heart and it should be no surprise it inspired Gaspar Noé who has said it is one of his favourite films, he would use this similar style with his films and take that even further.

The film shows a man being released from prison after a 10 year sentence, he proceeds to break into an isolated house with a small family and his violent urges start to kick in. That is the premise of the film, the character who isn’t named is a troubled man, his inner monologue is narrated through the film as most of it doesn’t have much dialogue aside from that. The character and actions are loosely based on real murderer Werner Kniesek, as the character does the horrible things he does it feel both real and surreal as it is extremely brutal and realistic but there is an element of exaggeration that comes through with the style and the performance from Erwin Leder and narration by Robert Hunger-Bühler.

A film that contains so much violence shouldn’t feel mesmerising at all, much like the previously mentioned Henry, Angst is that sort of film and experience and some how that just adds to the impact. The way everything is framed and shot, the way sound is used and the pacing that feels like a little off really adds to just how uncomfortable immersive the film is. There is absolutely some vagueness when it comes to the state of mind of the character and whether or not this entire event has been imagined or not and once the end comes along it really is up to the viewer to decide on that. Angst lives up to that name, it really is in a state of angst the entire time much like the main character and it doesn’t stop. Make sure if you do wish to scope the film out to know what you are in for as this isn’t a film to put on at any time, the mood has to be right.