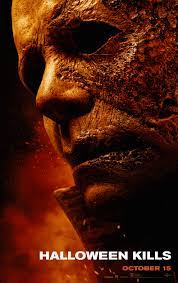 Michael Myers. A name that’s synonymous with evil incarnate and death itself. Since 1978, “The Shape” has carved out a place in not only the creation of slasher flicks but a niche in cinema that’s been rightfully secure since that bygone era. Even with the initial not-so-welcoming response from critics and the general public, slashers have scratched and clawed and stabbed their way into the confines of cinematic history and reality. If there was a monument dedicated to the legends of this specific type of horror, Myers would be one of the main faces. The face of fear. The face of the boogeyman. The face of Halloween.

Okay let’s see if I can explain this to those unfamiliar. As a franchise, the saga of Halloween contains literally ELEVEN films spanning multiple decades and three separate timelines. First there’s the John Carpenter original main timeline which consists of the most overall films. Those films are the masterpiece Halloween (1978), the serviceable Halloween II (1981), quirky spin-off Halloween III Season of the Witch (1982), the amazing Halloween 4: The Return of Michael Myers (1988), the decent Halloween 5: The Revenge of Michael Myers (1989), odd yet adequate Halloween The Curse of Michael Myers (1995), utterly fantastic Halloween H20: 20 Years Later (1998), and lastly the abysmal Halloween Resurrection (2002).

Then director Rob Zombie took on the franchise with his own trashy, depraved, pervasive reboot Halloween (2007) and Halloween 2 (2009). And while those films were largely despised when first released, they’ve since gained a following who appreciate Zombie’s approach more than others. And now, we’re in the director David Gordon Green era with their sequel/reboot of the original Carpenter film in 1978.  Confused? Yeah, well many are….And I haven’t even gotten to the multiple trilogies and timelines within these eleven films. For more history on that, consult with your local horrorhound and megafan for those details. Though Myers has also been seen in comics, novels, video games, fanfiction, and pretty much every other medium you can imagine. So, yeah I wasn’t kidding when I said Mikey is apart of history. Past, Present, AND future. Oh My!

And now, after ALL of that, we’ve now reached the next sequel in the Green/McBride timeline and the 12th film in the institution with Halloween Kills (2021). A virtual bloodbath and love letter to the mythology spanning every single decade and film in momentous fashion.

As the story goes we’re starting literally right where the last film left off. In Haddonfield, Illinois on Halloween night, Laurie Strode (Jamie Lee Curtis), her daughter Karen (Judy Greer) and granddaughter Allyson (Andi Matichak) are rushed to the hospital after their violent confrontation with Micheal Myers, where they trapped him in Laurie’s fortress of a house and set it ablaze. But as firefighters race to the scene and douse the flames, they unwittingly release Myers from his fiery prison. Now, pissed off and blood thirstier than usual, The Shape goes on a rampage throughout the town. And as the Strodes recover from their battle, survivors of the 1978 massacre Tommy Doyle, Lonnie Elam, Lindsey Wallace, Marion Chambers, and Leigh Brackett (Anthony Michael Hall, Robert Longstreet, and reprising their roles from the Original Carpenter film Kyle Richards, Nancy Stephens, and Charles Cyphers) hear of Michael’s return and rally the scared and enraged townspeople together to go after him and rid themselves of this indomitable evil once and for all. A long, brutal continuation of All Hallows Eve ensues.

First off, I have to note that this film went in a couple directions I didn’t see coming. Recall plenty of people complaining that the trailers revealed too much of the story and kills. I assure you they did not. Secondly, as the story goes in those various directions there’s tons of honoring and homaging (and in some cases negating) previous installments in a multitude of ways. From references, to easter eggs, and even a surprising cameo that’s 100% non-CGI, there’s so much to unpack in this gruesome thriller. Green as a director, writer, and lover of this franchise continues to draw upon the mythos and carve out its own sustainable and alluring saga. Albeit a bit unnecessary considering this is the twelfth project. But who am I to talk as a lover of comic book films and established multiverses. Nothing wrong with another I suppose. Especially one that seeks to right a few wrongs and correct a few mistakes that have followed the franchise since its culmination.

Despite all the goals it’s setting out to accomplish the question remains – is it a good film? To be honest, I’d say yes with some caveats. At the helm, seeing another showdown between The Shape, The Strodes, as well as the rest of Haddonfield is exactly what I wanted and it’s exactly what I got. The pace was brisk, tone kept its darkness, and the surprises were pretty engaging. Also Myers himself has never been more unstoppable, unyielding, ravenous, stealthy, and even weirdly agile as he is in this film. Definitely made for freakier scares, thicker tension, and more ferocious kills. This entry lives up to the title. With gusto. Everything else is on point, from the setting of the town being spooky thanks to Gordon’s direction and Michael Simmonds’ broad but crisp cinematography, the score being infectious and encompassing thanks to Carpenter, his son Cody Carpenter, and godson Daniel Davies. (Truly keeping it in the family) And last but not least, the performances are solid, with legendary scream queen Jamie Lee Curtis leading the charge as she can portray Laurie Strode in her sleep with conviction, strength, and gravitas. She gives these films their weight now more than ever, and it’s pretty wonderful she hasn’t grown out of them like so many other major stars of extensive franchises. And of course I have to note the men behind the mask as the Original Myers, Nick Castle returns and newcomer James Jude Courtney both reprise their roles as evil incarnate and they certainly rocked it. As I said, Myers has never been this undeniably scary. So kudos to both on accomplishing that feat.

Is it a perfect film? Absolutely not but its flaws don’t distract from the overall enjoyment factor. But I can understand why they would degrade the experience for others. The bloated screenplay can be a bit tedious and stilted (I swear if I hear “Evil Dies Tonight” one more time I’m gonna scream), a few of the camera shots leave alot to be desired, not to mention a few decisions made by characters are incredibly insipid, and lastly the semi-effective but clanky commentary on Myers’ longstanding effect on the town of Haddonfield and its people while interesting just doesn’t completely land the way it should.

But overall, I can’t deny I had a blast with this sequel of a reboot set in a newer timeline of an established story from the 70s. It was everything you could want in another go-around with the franchise and it works extremely well. Significantly more than I ever thought it would. And after a bit of researching I discovered Halloween Ends (2022) will start filming in January for another October release next year. Sooooo, if this entry was any indication, we’re going to get another insurmountable bloodbath with the Myers clan down the line. And I for one am righteously eager to see just what Green and company have in store and how they’ll close out this latest depiction. And if they’ll start it up again in a couple of years. If they do, might this humble schmoe suggest The Shape go the futuristic Jason X (2001) route or possibly fight Leatherface, Pinhead, or Chucky in a versus film? At this point, anything is freaking possible. And come on, you know you’d watch any of those films for the audacity alone. I know I would.