Jay and his hetero life-mate Silent Bob are back, and they’re busted! After being caught growing marijuana out of a chicken sandwich shop they’re using as a front, our boys find themselves in court. There they meet the mysterious lawyer (the always welcome Justin Long) who gives them a mysterious contract to sign right off the bat. After getting Jay and Bob off for the marijuana charge, the shady lawyer reveals himself to be a representative for Saban films, who distributed the first Bluntman and Chronic. His mission? Literally strip Silent Bob of their right to their own identities and the use of their own names.

The reason for this is made clear when Jay and Bob visit Brodie (it was great to see Jason Lee again) at his comic book ship. There he tells them Saban are halfway through filming a reboot of Bluntman and Chronic, and it’s being directed by none other than that hack Kevin Smith, who they find out is calling for people to help him finish filming the final scene for the movie at the upcoming “Chronic Con.” A couple of familiar dialogue and visual cues later, Jay and Bob decide to head to Hollywood to stop that fuckin’ movie from getting made. 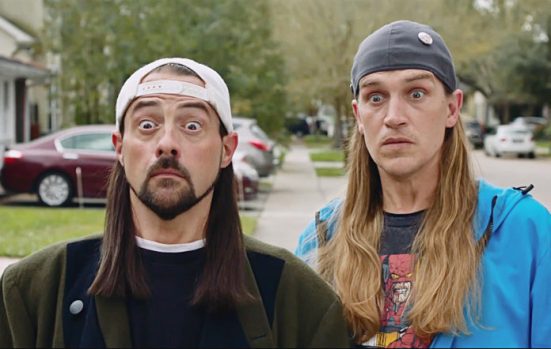 It’s when Jay runs into his old flame Justice (more affectionately known as Boo-Boo Kitty Fuck) who is now a happily married career woman, that the movie starts cooking with gas. Justice informs Jay that they spawned a love child (portrayed by Kevin Smith’s daughter Harley Smith) brilliantly named Millennium Faulken. Millennium and her friend Soapy…quite forcefully convince Jay and Silent Bob to take them along on their road to Chronic Con.

Jay and Silent Bob reboot is fan service on a couple different levels. Fans of Smith’s cinematic universe will undoubtedly eat this up. I’ve followed his career the whole way and while a few have been misses (Tusk (2014) and Yoga Hosers (2016), while I admire Smith’s audacity to get them made, were lost on me) a lot of what he’s given us embody a handful of things I love about film.

It’s the faithful fans I think this film has and will resonate with. The fans who have been present for everything about Smith’s life he’s been an open book about. This is for fans who rejoiced when Smith survived his heart attack, and were happy when he adopted a healthier lifestyle. References to this abound in reboot. This is for fans who watched Harley Smith grow up in front of their eyes. Her performance in this movie was nothing to sleep on, and I hope to see much more from her. Her interactions with Jason Mewes were the highlight of the film. Speaking of Mewes, this was for the fans who are aware of his battle against and defeat of drug addiction. He hit some subtle emotional cues here that were a joy to see. This is for the fans that were aware of the weird turn Smith’s friendship with Ben Affleck took for years, so as a fan seeing Affleck in a cameo that is arguably the best scene in the film damn near made me shed man tears.

Kevin Smith knew exactly who he was making Jay and Silent Bob Reboot for, and if this were to be their swan song…I’m happy. But the unexpected growth of these characters had me wanting more, all these years later. So many have asked over the years what, if anything, is the appeal of these particular misfits? How has Kevin Smith and his characters endured after all these years? This movie is it. His ability to surprise you. And something tells me he isn’t done.