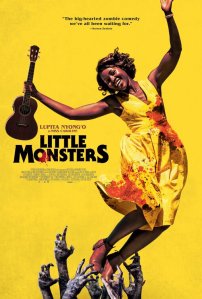 The zombie sub-genre has been running strong, with many films and television shows featuring the undead, from Night Of The Living Dead (1968) to The Walking Dead (2010-). It seems zombies have not lost their popularity and really captured a strong fan base, and it is not difficult to see why. There are many angles and metaphors one can use to tell a story, originality is key in this sub-genre and ultimately that will get your audience invested. Little Monsters (2019) not the 1989 film of the same name, is a fresh take on zombie’s that tells a great relatable story, with lots of laughs and adding in some unique elements. Horror/Comedy is not an easy genre to tackle, writer/director Abe Forsythe manages to mix both elements while bringing in his own spice to the zombie genre.

Dave (Alexander England) is a washed-up musician, his life is crumbling after breaking up with his long-time girlfriend and he decides to move in with his sister Tess (Kat Stewart) and his nephew Felix (Diesel La Torraca). Dave thinks things are picking up when he meets Felix’s teacher Miss Caroline (Lupita Nyong’o) and instantly gets a huge crush on her. He offers to help chaperone their school excursion to spend more time with her, they make their destination and get an added surprise when famous children’s entertainer Teddy McGiggle (Josh Gad) is there filming. Their day seems to be going well, but it isn’t going to be peachy for the class and the adults as a US Military Base near by has a zombie outbreak. Dave realizes he needs to step up and help Miss Caroline protect the children and ensure they all don’t become the undead. 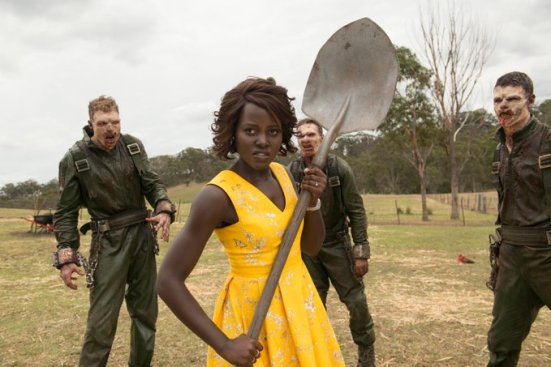 What sets Little Monsters apart from the usual zombie film are the lead characters, the setting, the humour and the class of kids. It isn’t often you see this type of film feature kids, and it works extremely well. They are a lot of fun and give some good performances, they share great chemistry with the leads as well. The genre gained a lot of funs with 2004’s Shaun Of The Dead and will likely see that happen again with this film. They don’t share a lot in common, but both films are such a great time and quite easy for anyone who hasn’t had much experience with Horror/Comedy to jump on board and enjoy. The crude humour is absolutely hysterical and well written, it never feels out of place and the cast are natural with the script.

The performances are spot on and very well cast, Alexander England teams back up with Abe Forsythe after Down Under (2016) and it is clear they work well together. Dave is the ultimate loser type character, going through life without much ambition and unable to really understand what is and isn’t appropriate with kids (those scenes provide some great laugh out loud moments). He is quite the opposite of Miss Caroline, who is a natural with kids and shows a lot of caring and relates to them on their level. He goes through a lot in the film, and his performance hits all the right notes and he has fantastic comedic timing. Lupita Nyong’o proves once again what a fantastic actress she is and able to tackle any type of role and make it her own. The pair share a wonderful chemistry that develops throughout the film, it is a lot of fun to watch them together, especially with the scenes singing Taylor Swift songs or Neil Diamond. Josh Gad is not Olaf here, he plays quite possibly the most obnoxious and ignorant character and the fact he is so good as Teddy McGiggles shows he has great range. He’s a very funny addition to the film, and it will not be easy to see him in Disney films after this performance. Kat Stewart has a smaller role, she does quite well as the caring older sister and loving mother to Felix. Diesel La Torraca is fantastic, he is a great young actor and played his role convincingly. He is the main child of the film, but the others do a solid job and are big highlights. 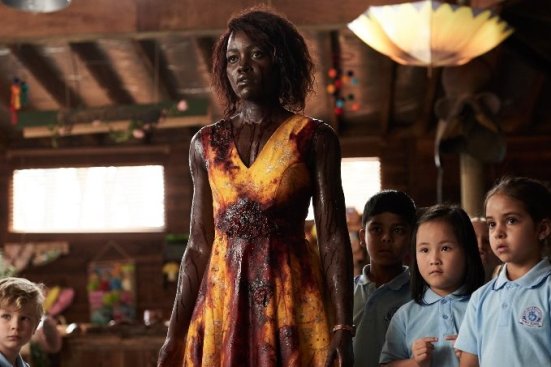 Abe Forsythe proves he has a great eye as a director and such a natural writer, he can nail the comedy elements and that is never an easy task. He proves he has such talent to work with children successfully, he got out some good performances and wrote them very naturally.  It is always great to see a filmmaker/writer come up with something fresh especially with a genre where almost everything has been done. Little Monsters has a lot to say in regards to being a parent and caring for children, handled with lots of comedy that parents are sure to find familiar. It’s quite enjoyable to see how the zombies were handled, they are there, and they are a threat and added some good satire to the piece. The humour surrounding the zombies and the US Military is very well handled and it works so well, if it was taken seriously the film wouldn’t have worked in that aspect.

The comedy element isn’t reliant on the zombies but the human characters and their interactions. This does set it aside from other genre films that hope for laughs with over the top gore and messy kills, which is very much appreciated here. It does have some clichés and typical bits for a zombie film, they don’t take away from the film or the enjoyment what so ever. Little Monsters is a crowd-pleasing fun time, a breath of fresh air in Australian cinema and one that has a strong rewatchable factor. Do yourself a favour, see this film and have a bloody good time!

Author’s Disclaimer: My sister Bruna Papandrea along with her husband Steve Hutensky produced Little Monsters. My own personal connection to the film bares no impact on my thoughts and feelings towards the film. As a critic I pride myself on viewing and critiquing content truthfully and unbiased.