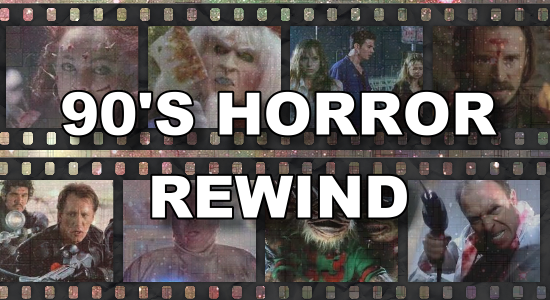 The 1990’s were an interesting decade for horror films, the slasher genre saw a resurgence and those films became the more popular ones thanks to the likes of Scream (1996). A little seen genre during that decade was the haunted house film, they went under the radar for a little and were seen on shelves in Video Stores. It is a shame that sub-genre wasn’t as popular because there are some gems to be found, including Haunted (1995) – based on the novel by James Herbert, not to be mistaken by the utter failure of a film The Haunting (1999). Haunted is more about quiet scares and character development, with an interesting twist that is well disguised.

The film focuses on Prof. David Ash (Aidan Quinn) in the 1920’s as he strives to debunk the paranormal and supernatural. This could be because as a child his twin Juliet (Victoria Shalet) dies during an accident when they were playing. Her death continues to haunt David, and this follows him to Edbrook where an elderly lady Nanny Tess Webb (Anna Massey) has called upon him to find out if she is being haunted. When David arrives, something seems quite off, Nanny Tess seems disturbed and or mad and the three other occupants siblings Christina (Kate Beckinsale), Robert (Anthony Andrews) and Simon (Alex Lowe) seem to torment their old Nanny and act a little peculiar. As David spends time in the house, he grows closer to Christina and experiences things he can’t seem to explain.

There is some great atmosphere in the film, once David arrives at Edbrook something seems very off, and this feeling carries on throughout the film. The scares come here and there, leaving a good unsettling feeling even through some of the lighter scenes. The focus is on David and through the film his character gets developed and leads to some insight about why he wants to debunk the paranormal and how badly his twin sister’s death has affected him. Out of the three siblings the maim focus is on Christina, and David tries to break down her walls and find out more about her. There is an interesting dynamic between the pair and natural chemistry that makes their scenes together quite watchable. The strange events almost take a back seat at times, but there is a purpose to that.

A big highlight of the film is the two lead performances, Aidan Quinn is on top form here as David, he conveys a lot of emotion and he shows the impact of a life long grief. Kate Beckinsale is memorable, this is one of her best early career performances, when she is on screen she lights up and showcases her range as an actress. The pair as mentioned share a very strong chemistry, their scenes are some of the most memorable in the film. Anna Massey is quite unsettling as Nanny Tess, while her performance is very uneven it adds to the nature of the film and whether she is being haunted or she’s just gone mad. John Gielgud has a small role as the family Doctor, his scenes are a little unnerving and he plays the part perfectly. Anthony Andrews and Alex Lowe are fine as the two brothers, they add an almost sinister air to the film, which really works.

Despite some poor effects, the film is overall quite successful, it is compelling, intriguing and the final twist is a good one. The direction by Lewis Gilbert is well handled and something a little different, he was veteran director at the time of this film, whose filmography is glorious, and he is someone that is sorely missed. Haunted is a gem of a film, it is a must see of 90’s cinema offering something different from the usual haunted house film.