First and foremost Your Honor, I would like to state for the record that I am a fan of Resident Evil and even at its most ridiculous, awe-inspiringly awful, I still found a sense of enjoyment in the calamity of ideas interbred with greed and avarice of Capcom. Yes, Your Honor, I revelled in the stupidity, the insipid, convoluted storytelling, the blatant fan-service and absolute disregard for the roots it germinated all the way back in 1996. Yes, Your Honor, I wasted my money on the PS4 digital remaster of Resident Evil 4, 5 and 6 even when I had them all on my PS3 (though in my simpering defense, they were crazy cheap and RE4 was the Big Dog’s Biscuit). Finally, Your Honor, I too became rather complacent in what my standards for an effective survival horror game carrying Resident Evil‘s tainted moniker  were and it wasn’t until I saw the previews of Resident Evil 7 when I copped that bucket of ice-cold water to the face and a napalm enema up the butt that I realised I had become far too forgiving.

For the longest time, Resident Evil had been slaving in the trenches, pushing the grindstone with as much fortitude of an aged mule with a view of making money and pandering to the exact opposite crowd it was originally conceived to entertain. Call Of Duty had usurped tentatively traversing the too-close halls of the Spencer Estate, the fear of instantaneous death just around the next corner and deliberate disempowerment had been replaced by deafening gunfire with all but shallow references to the shadow the series used to be. Not so with RE7. 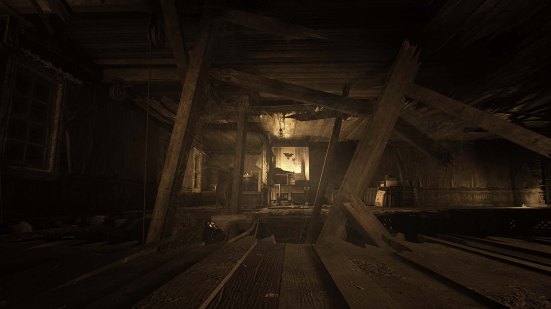 Resident Evil 7, for lack of a better term, is not the consummate revolution the series required, but it is a MASSIVE step in a new, promising and beautifully dreadful direction. Stripped back in content, story and scope, yes, but high in stakes, keen on intimacy and making you feel powerless, abso-fucking-lutely. While clocking in at roughly 10 hours of straight gameplay, RE7 may be short, but it is jam-packed full of tense scenarios, creepy locales, consistent vying for survival materials and a unit of persistent foes which champion this first-person venture into the world of survival horror. Playing as Blank Yet Inoffensive Slate Ethan Winters, you hear tell that your wife, Mia, MIA (haaa!) after three years has resurfaced in the fictional bayou-bound township of Dulvey, Louisiana near an old, seemingly abandoned and mondo foreboding plantation house which was formally owned by an elusive family unit known as the Bakers. What’s a man to do? Go and get her without any assitance from the authorities of course!

It is no mystery this game was heavily inspired by the vile and objectionable style of American horror of the ’70s and early ’80s, clear influences of The Texas Chainsaw Massacre, The Evil Dead and The Hills Have Eyes are but just some of these, but you know what? This is a far stronger point than it is a weak one. RE7 is a distinct departure from the somewhat plastic austerity of it’s predecessors and if you are gonna steal, you had best well steal from the best.

It’s all a very rudimentary set up, but conversely, that is precisely the approach Resident Evil 7 needed to take in order to restore a modicum of respect the series had all but completely lost in the past. Although the first person horror game is hardly a rarity (System Shock, Alien Isolation, Outlast, Soma and Amnesia being some of the most successful forays into the sub-genre), it is a first for the RE franchise, and in my eyes, it was a breath of rotting, necrotic air. You see, when you are placed directly into the shoes of your avatar, gameplay takes on another layer of immersion. The hand holding that gun is YOUR hand, the sound of feet running from enemies to safety in times of strife are the sound of YOUR feet, what Ethan sees is what YOU see. Resident Evil 7 is all about atmosphere and player participation and it never allows you to forget it. While the textures in the game can fluctuate between photo-realistic and previous generation patchy at best, that does not eliminate the feeling of “Do I REALLY need to venture into that dark cellar?” You know you have to, you know for a fact you do, but it is the sensation of caution and high alert which RE7 fosters lovingly.

The game also makes no pretensions about holding your hand either, which shocked the hell out of me. Since RE4, conservation of ammunition and resources had become a vagary of the past, a nostalgic memory because more often that not, enemies would magnanimously drop some generous rounds of ammo and health without a single compunction. Not so with 7. Ethan is not a trained soldier or a police officer. He is your Every Man. While generally proficient with a gun (holding the business end away from his body is a general measure of competence in my book), his aim is not rock steady, his HP is ridiculously limited and I loved every second of it. What it joy it was to once again fear for my life as I roamed through the dilapidated and nauseating Dulvey Plantation, the scent of death and potential, painful demise wafting through the air as I was hunted by the various contingents of malevolent Baker Clan and the less… pleasant denizens of the Dulvey Estate, speaking of which, finally, after all of these years, a Resident Evil game which takes place in an ACTUAL residence!!!!!

Despite the more deliberate approach to asburdity chronicled in 4, 5 and 6, the voice acting for the RE franchise has surprisingly grown in quality and the voice work in 7 is no exception. The primary characters, both heroes and antagonists are surprisingly well-acted with a generally respectable script which toes the line between rending, degenerate horror and self-awareness but doesn’t stray too far into either camp. The Bakers in particular steal the show with the imposing patriarch Jack Baker heading the charge, a long tall glass of bloodied moonshine made of chuckling, mordant humored sadism and raw ferocity combined into one who has the persistence of Jason Voorhees and backed-up lavatory mouth of Freddy Krueger. Half of the time I actually found myself laughing at his grotesque sense of humor and then wishing he would leave me alone, often within the time period of 30 seconds. Make no mistake though, the sound design in the game is as robust as it could be. The only vocal performance which didn’t quite work for me was the character of Zoe whose accent couldn’t decide what region in America it was from.

Graphically speaking, RE7 generally looks more than respectable with a great emphasis placed on showing just how rotten the Dulvey Estate looks, shades of yellow, brown and sickening orange dominate the game along with deep black shadows with walls covered in mould, shredded furnishings, peeling, paint-scaled walls weathered from exposure and negligence and the bayou is a literal cesspool of scum and reprehension. With a straight forward HUD and map system, RE7 may appear to be bare bones, but upon closer inspection it is a necessary stripping of the fat to expose the skeleton underneath. However, in saying that, the textures are far from flawless, some environments look incredibly static, almost like matte paintings rather than organic environments which have soaked up the blood of those unlucky enough to venture inside of it. While not a deal-breaker, at least not for me, for a next-gen title, these mistakes could have easily been rectified if the devs had spent just that little more time on patching up those frankly easily avoidable errors.

As per typical Triple A game releases, DLC is part and parcel of the experience, but, this actually has to be one of the better loaded titles to come out recently. Several episodes can be downloaded from the digital store which have strong ties to the story mode, one of my favourites being the story of Daughters, which takes place before the events of 7, involving Zoe and her family during a dark and stormy night. Vague and cliché is exactly how it sounds, but in terms of narrative context it is a mighty strong and surprisingly emotional entry which serves as valuable insight to 7‘s plot AND the characters you will come to fear. Additionally we have a few other episodes which act as a nifty bonus and offer enough bang for your buck, one being a hilarious non-canonical parody called Jack’s 55th Birthday. It’s silly, it’s whimsical and completely ridiculous but I found myself accepting and enjoying the entire experience. Could all of this content been added onto the disc or digital copy upon initial sale? Absolutely; as with many of you, I despise it when companies pull this trick because they KNOW we will fork out money to do it, but at least the extra money you spend will generally want for nothing. There is enough worthy content here to appeal to various tastes.

Now, a word on the VR component. I don’t personally own a PS4 VR device, but from all accounts I have heard, playing this game in this mode is an intense, vigorous and brick-labor inducing experience. If you thought you contracted early onset of hypertension experiencing this horror train on the regular mode, VR compounds that three-fold. Enemies have a rude habit of getting right in your face, forcing you to become more precise with your marksmanship and when you waste a bullet, you feel like slapping yourself upside the head when you aren’t being skull-fucked by an enemy. When VR makes you feel that way, you know you are getting the experience you signed up for and then some.

So, what is my final verdict? This baby is definitely a buy, even at full price. 7 finally took that jump after a long trudge through genre-confused mire of mediocrity and the risk paid off. While light on the puzzles and monstrous foes other than the Bakers and some scenarios which are fairly typical of RE, 7 is a soothing balm return to form and it has once again restored a solid sense of faith I have in Capcom. Although the future remains unseen, based on the merits of 7, this new yet still familiar face is precisely the one I needed to see ever since 2004. It may not be a classic, but by God it is a whale of a time which still holds water upon replay. Thank you for coming to your senses, Capcom and welcome back to the family.