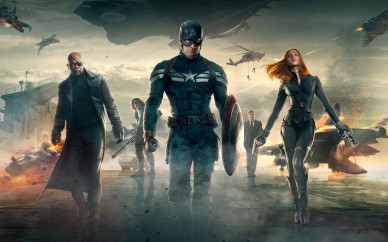 Since Marcey, Bede and myself did a conversational audio review found right HERE, I won’t go too in-depth in my solo review of 2014’s extremely successful follow-up to Captain America: The First Avenger, rather just emphasize my own personal feelings toward the film, its’ characters and what I feel it means for the Marvel universe now that HYDRA’s playbook has been busted wide open and that basically all we have known up this point has either been a filthy lie or a thoroughly convincing half-truth. While the first film was an optimistic celebration of the birth of Cap and his ideals, Captain America: The Winter Soldier is his savage deconstruction of the values he holds dear and drags his beliefs through the mud. Fundamentally different to the first but an extremely powerful Marvel film that has more than a few shades of contemporary and vintage conspiracy literature of years past ranging from John Le Carre to James Grady with a dose of techno-thriller on the side.