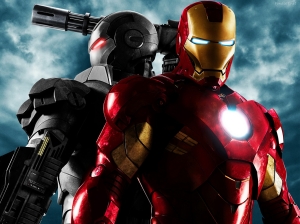 First thing’s first; Sam Rockwell as Justin Hammer aka Weasel. Great bit of casting and a friend of mine, Tyler, found it amazing that the main villain was this sniveling little wannabe who tried too hard only to fall flat on his face. Can’t believe I left that out of my audio review so my profoundest apologies in case any of you out there wondered why he didn’t get a mention.

Iron Man 2 had an almost sickening about of hype surrounding it, everywhere you looked there was promotions for the movie as well as its merchandise. Everybody was pumped to see what Tony Stark was up to next and if they were expecting more of the same they weren’t disappointed. Although the film wasn’t a flop it has nonetheless earned a reputation of being one of those movies that was big hat, no cattle. While I do agree it fell into its own trap of attempting to replicate the spunk and spirit of the original, it still has some great stuff in it; Tony failing to cope with his failing health on top of his obligations to the world and his friends, his estranged relationship with his deceased father Howard Stark (Victor Slattery) and how his future could possibly be that of Vanko, aka Whiplash. While a mixed bag of lollies, Iron Man 2 still manages to entertain on a general level and it’s impossible to despise with the debut appearance of Natasha Romanoff aka the Black Widow as well as clever dialogue, wild action sequences and some more Acca Dacca (AC/DC to you non-Australian folks). This film is still very much about the man that Stark is rather than the paragon of justice he sets himself out to be.