Technically, Masterpiece Theatre’s Dracula (made exclusively to television by BBC in 2006) would have been a miserable failure- it’s too short, it glosses over several important factors and it’s quite an unusual piece to be released by the normally prestigious production company. However, what ultimately saves it (and us) is that it takes a deliberate step to deviate from the tale with some respectable performances to back it up. In my personal opinion, this may have worked better if this production was a sequel rather than a proclaimed ‘faithful’ and truncated version of the tale.

Rather than focus on the supernatural elements of the story (which are still there), ‘Dracula’ turns it into a drama that focuses on the Victorian anxieties of disease, sex, loss and personal shame, and all of these things are compounded by the arrival of Dracula himself. The handsome Arthur Holmwood is about to marry his beloved Lucy Westenra (Sophia Myles), but he is petrified to consumate their marriage due to the fact that he has syphilis. He is desperate to find a way to remedy this and resorts to extreme measures that even he cannot fully understand. Young Mina and newly-appointed solicitor Jonathan Harker have just been married but Jonathan must leave at once for Transylvania to close an important business deal with the elusive Count Dracula, leaving Mina alone and uncertain of what has become of her husband. Doctor John Seward, who has for a long time adored Lucy feels bitter that she chose Arthur to be her husband despite their long term friendship. All of these characters are in an unenviable state that only gets worse upon the arrival of Dracula.

When Bram Stoker wrote his magnum-opus, scandalous and provocative things were known but were never discussed freely. It is this element of fear being like a dark, unknown and forbidden abyss that is personified by Dracula- nobody knows what he is, or where he truly came from. There are theories, and only physical facts but no actual wisdom about him. I don’t want to give away an important plot point in the case of this production, but let’s just say Van Helsing is not so much an esteemed professor on the matter- he is as much a victim of Dracula as anybody else is. Stoker was very well aware of how his fellow humans felt at the time, and he addressed this by creating a fictional agent to reflect it. MP’s 2006 ‘Dracula’  keenly addresses this, though it never shoves it in your face and rubs it in. The entire production plays out a little like a fever dream- you can certainly feel the sensation of something being wrong, but it is hidden behind a dreamy masque. It would almost be erudite were it not for the fact it never truly reaches the potential.

Make no mistake, the repressed sexual desire is there, as is an at times, dreamy atmosphere, but these elements don’t combine the way they should have. As I said, what saves it from drifting into complete incomprehension are the actors and their approach to their roles.
The ever ravishing Sophia Myles, in my mind, makes for an ideal rendition of Lucy- charming and likeable but with a highly palpable sensuality that emanates from her even before she becomes fangy. Her chemistry with Stephanie Leonidas (Mina) is very sweet and convincing. You can see why all of the men adore her (which in turn will make you adore her also). By the way, her intimate scene with Dracula is a bit of a collar-adjuster. Stephanie Leonidas keeps Mina real, but at times, she allows hysteria to become her leading emotion when it feels a little forced. But that’s just me. Tom Burke is an interesting young actor with a fascinating face and he embodies Seward’s personal bitterness as well as his desire to be the best man of medicine he can be. Dan Stevens is incredibly handsome and he makes for a good choice of this version of Arthur Holmwood. He may not be to everybody’s tastes, but he takes on the material the best he can. David Suchet is quite a unique Van Helsing. I’ll leave that up to you to see for yourself. 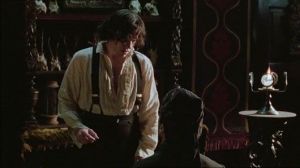 So where does this leave Marc Warren? The guy isn’t the embodiment of Dracula as we know him, but this version of the Count has been written to be more of an insinuating menace than an overt one. He is also quietly predacious. Warren’s stature is not upfront intimidating, but he doesn’t try to be, instead, he uses it to his advantage, especially when it comes to his more intense scenes. The man can just stand there and stare at you with his piercing ice blue eyes and you know a world of hurt and Hell will come upon you. He isn’t what you’d call traditionally handsome (thank God for that), but like BBC’s other Dracula, Louis Jourdan, he is still very sexy in how he carries himself. His forthright nature, his animalistic attributes, his growly, intimate tone, it works beautifully for him because those are his strengths and he plays to them like a champion. He reminds me of a younger and leaner Malcolm McDowall- that’s a compliment. The only thing that worked against him was his ‘Old Dracula’ make up- Warren, despite his angular features still has a youthful look and you can still see that through all the prosthetics and aged make up he wears when we first see him, and the wig… my mother always said if you can’t say anything polite, don’t say anything at all.

All in all, ‘Dracula’ still would have worked as a sequel rather than another re-telling- it has a solid bunch of ideas and an awareness of the time period, a competent cast and a dangerous sexuality lurking beneath it, but it never quite delivers because it never knows quite what it can be. I wanted very much to love this version, but all I could do was like it. I’m not saying that is a bad thing in itself, but when you have all of that great material and you don’t use it to maximum effect, why bother showing it at all?