This week, I’m changing it up.  With today being Friday the 13th here in the USA, I figured it was the perfect time to celebrate a character as a Legend of Horror.  And who better to be the first character I celebrate than Jason Voorhees?  The Friday the 13th film series is one of my all time favorites.  As a young kid in the age of the video store, every weekend when my parents would take me to rent a movie or two, I’d always go for the Friday the 13th series first.  My brother and sisters can tell you how much I forced them to watch these movies just to see them get piss your pants scared of Jason Voorhees.  Yep, I was that older brother.

Jason is just so iconic.  Even kids that haven’t seen the movies know who Jason is.  For a silent killer that never has any lines, it’s really remarkable how much a part of pop culture he has become.  Toys, masks, costumes, lunchboxes, posters, you name it and I can find some sort of merchandising for him.  But why has he become such an icon for many in the horror community?  I have a theory.

A lot of horror fans have felt like an outcast.  The popular kids torment them.  They really have no where to turn but into their love of horror.  Jason in many ways represents these people.  He was an outcast too.  A deformed mongoloid that nobody cared for except his dear mother.  It was that lack of caring that brought about his first supposed death.  And when he sees his mother killed by one of those kids, he becomes a vicarious representation of young horror fans who were tormented by the popular kids.  Through him, they got to strike back and get a pseudo-revenge.  How do I know this?  I was one of those kids.

The Victims of Jason Voorhees

One thing I always loved about Jason is the fact that he’s an equal opportunity slasher.  Black, white, asian, wheelchair bound, jerk, nice guy, slut, virgin, jock, geek, Freddy, he just doesn’t care.  If you are in his woods, he’s coming after you.  Hard.  Seriously I’ve seen Mack truck accidents that did less damage than he does when he’s really pissed off.  Stay the hell out of Crystal Lake.

Jason is also the strange case where the fans actually love the cliches.  You’ve seen the stereotypes and the same dumb mistakes made over and over again, but it’s comfortable.  With Jason you know exactly what you are going to get.  It really helps make the movies more fun if you ask me.  When they go outside the box, that’s when things start going of the rails.  I’m looking at you Jason Goes To Hell.  Jason is not a fucking slug and you should feel bad about ever coming up with that stupid fucking idea.

The Men Behind The Mask

Many actors have tackled the role of Jason and some stick out more to me.  My all time favorite is Ted White, from The Final Chapter.  When he came at his victims, he did so with a ferocity that was just so pure.  He hit and he hit hard.  CJ Graham set the tone for what would be know as the stereotypical Jason in Jason Lives.  The slow walk, the deliberate mannerisms, when I think of the template for Jason, this is definitely it.

Kane Hodder of course is the most iconic Jason and for good reason.  He’s just so damn menacing in the role!  He truly gave the best performance as the character if you ask me, because he took him from just being a killer to being an undead Terminator.  It’s clearly evident in all four films he stars in, a record for the franchise, how much fun he is having and how much he loves the character.

I know I may catch some shit for this, but bring it!  I really, really liked Derek Mears’ portrayal of Jason in the 2009 remake.  He brought it back to what I loved about Ted White’s turn under the mask.  He came at you like a charging rhino.  When he kills, it’s with sheer brutality.  His Jason was just so pissed off!  I think he nailed it. 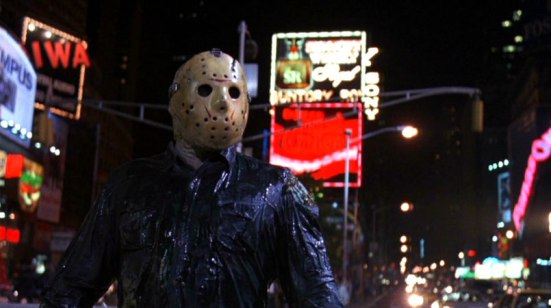 The Tools Of The Trade

Jason is really, really good at killing people.  You put anything in his hands, you have a deadly weapon.  Sure, he has his iconic weapons like the machete and the ax.  And when he uses them, you better believe he does so better than anyone.  But he’s killed so many people with other means!  The infamous sleeping bag kill, where he slams a woman in her sleeping bag against a tree, stands out.  So does the time he killed a drunk with his own bottle of hooch.  Power saws, drowning, arrows in the head(I’m sure John Fallon appreciates that!), ripping hearts out with his bare hand, crushing skulls or just punching someone’s head clean off are all tools of his trade.

You Can’t Keep A Good Killer Down

Yeah, good luck killing him.  He’s been drowned, stabbed, shot, hacked, blown up, dumped in toxic waste, electrocuted, dragged to hell, made a pinball by Freddy Krueger, even re-entered an atmosphere.  Nothing stops him.  Nothing. 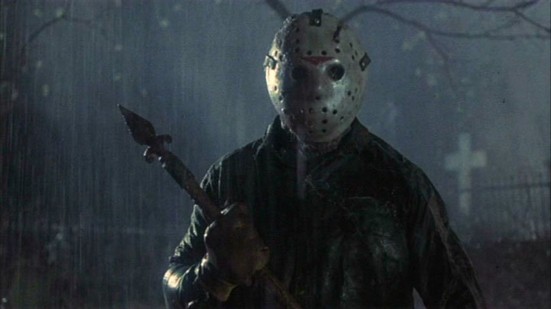 So there you have it.  My look at the Legend of Horror that is Jason Voorhees.  He’s such an icon of the genre that it would be downright criminal not to include him as a Legend.  I will always have a special place in my heart for the character and cannot wait to see the next movie.  I don’t care if it’s found footage or not.  If it’s got Jason in it, I’m there.  So today, pop in a Friday the 13th flick, have a few cold ones and let this Legend of Horror bring the frights!