Since Friday the 13th is tomorrow, I thought what better time to list off my three favorite and least favorite Friday the 13th movies.  Now, just because a movie doesn’t make either list doesn’t mean I don’t like it.  It just means I dig these or dislike these more.  Honestly, even the ones I don’t like that much still have some things in them I really like.  So, without further ado… Here we go!

I was going back and forth between this and the original and decided this beats it out by a slim margin.  Why?  Amy Steel.  Her character Ginny is hands down my favorite “Final Girl” in the series.  She’s not some chaste do gooder.  No, she feels like a truly well fleshed out character instead of a template.  She drinks, has fun and is easily the smartest heroine in the series.  It’s easy to see why she beat Jason in the end.

This movie also proves that Jason is an equal opportunity killer.  Dude in a wheelchair?  Machete to the forehead!  I love the shot of him falling down the stairs after Jason kills him.  Really fantastic kill.

Whenever I get people over for a few drinks and a Friday the 13th flick, this is the one I pop in.  It’s just such a fun flick with many winks to the fans watching.  There’s also a bit of a Frankenstein vibe that I just love so damn much.  Jason gets some pretty groovy kills, even if the movie was butchered by the MPAA.  My favorite is watching him break the sheriff in half backwards.  That was just raw power.

Also, this flick gave us the incredible song “The Man Behind The Mask” by Alice Cooper.  Damn do I ever love that song!

1. Friday the 13th: The Final Chapter

Without a doubt, this is easily my favorite of the series.  The main character, Tommy Doyle, was me as a kid.  He is hands down my favorite protagonist in any series.  Ever.  The kills are the extra special kind that only Tom Savini can bring.  My favorite is Jason’s own death at the end.  That was simply brutal!

And now that I rounded out my favorites, it’s time for my least favorite of the flicks.  Now, I will add one thing I dig about each one so that it doesn’t come off as too negative.  Here we go!

This is the classic case of your vision outreaching your budget.  The majority of the flick takes place on a boat, not NYC.  And even most of the scenes that are in NYC, were very noticeably not filmed there.  Add in the fact that there is very little blood in this flick and some really, REALLY stupid leaps in logic and you get one of the worst movies in the franchise.  Toxic waste turns Jason into a boy?  Really?

Now for something positive.  How cool was that shot of Jason in Times Square?  And Kane Hodder can do no wrong as Jason.  He nailed the character. 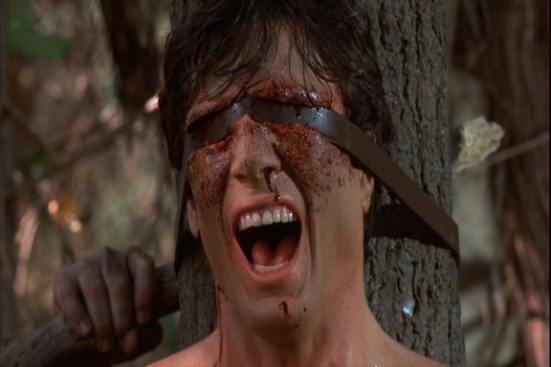 This movie has a lot of problems.  None of the cast are particularly likable.  There is a guy pretending to be Jason Voorhees.  The new Tommy Jarvis just sucks.  It’s just basically ninety minutes of meh.

On the positive side, this could have made an interesting slasher if it wasn’t in the Friday the 13th series.  Some of the kills were actually pretty fun.

Ugh.  Anyone that knows me knows that I despise this movie.  Utterly hate it.  First of all, Jason is NOT a weird demonic slug.  That is just fucking stupid and spits in the face of the entire franchise.  The leaps in logic makes Part 8 look like a masterpiece in comparison.  How the hell did Duke know so much about Jason when NOBODY ever knew that crap?  Seriously, fuck this movie.  With a chainsaw.

Yeah, I even have something positive to say about this piece of shit.  The FX work from KNB Studios is as amazing as you’d expect from those guys.  Kane Hodder(when he is actually Jason.  Ugh) is as great as ever.  He even gets to call Jason a pussy!  Also, the final shot at the end was a thing of beauty.  That’s it.

So there you go.  My three favorite Friday the 13th flicks.  What are yours?