*First and foremost, my apologies for not including the crew details from last week’s episode.  “Night Work” was directed by Juan Antonio Bayona and written by John Logan. Once again, my mistake* 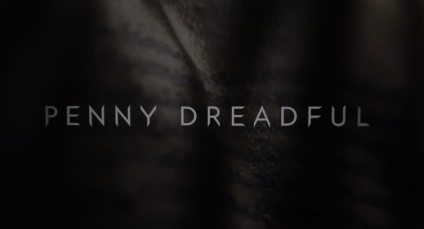 Within one episode, “Penny Dreadful” has been able to seduce and coerce it’s viewers into it’s horrific world through transgression and perversion. Despite the mask of propriety and God-fearing rules, the Victorian Era was filled to the brim with filth, despotism, exploitation and suspicion. At the same time, minds were incredibly open to the unseemly- Egyptology was all the rage back then with self-made adventurers traveling to Egypt and bringing back all sorts of curios. In “Seance”, world renowned Egyptologist Sir Ferdinand Lyle hosts a lavish soiree and invites, nay insists Vanessa and Sir Malcom. Lady Ives agrees to humor Lyle’s curiousity about her psychic prowess and during a particularly intense ritual, becomes possessed by a malevolent demonic entity which in turn makes her spout some terrifying and disturbing things. One of these things involving Sir Malcolm’s family- his missing daughter and supposedly dead son as well as cruel accusations of incest and murder within the Murray family. Terrified after what she has just endured and ashamed, Ives flees the party to find almost desperate carnal solace in a stranger only to be watched by a man from the shadows… Dorian Gray. In the middle of all this, the mysterious and bizzare murder of a prostitute shakes the streets of London, but strangely, Ethan Chandler does not feel the incredible intensity of the situation. Now, why would that be?

And that isn’t even a half of what is going on here.

While I won’t divulge much more plot-wise I will say this: this show really ain’t afraid to Go There. In addition to liberal doses of sex, explosive profanity and skull-duggery, Brona Croft, the consumptive prostitute, is an easy victim. Brona has always had a rough life, but she knows no other way to live as she has grown used to it. In a way, she has lost hope for ever escaping this lowly existence- in her long list of ways of sacrificing her dignity, she accepts an offer to take dirty pictures for and aforementioned Mr. Gray. For those of you who aren’t quite fresh on the tale of Dorian Gray written by Oscar Wilde, the long and short of it is as follows;  Dorian Gray is initially portrayed as the splendid ideal of Victorian high society- extraordinary youth and beauty. As such, he snares the almost idolizing admiration of Basil Hallward, a painter, and Lord Henry Wotton, a nobleman who imagines fashioning the impressionable Dorian into an almost Sadean figure. Dorian’s weakness above all is his own vanity and becomes convinced, in the aftermath of a brief conversation with Wotton, that his most salient characteristics—his youth and surface desirability—are ever waning.  Gray, terrified at the notion of awaking one day without these attributes sends Gray into a spiral of growing mental instability. Resolving to himself he will never allow this to happen he damns himself and pledges his soul if only he could live without bearing the physical burdens of age and over-indulgence. He longs to be as youthful and lovely as the masterpiece that Hallward has painted of him, and he wishes that the portrait could age in his stead. All of this proves, as tales of hubris tend to result in, are his undoing.

In “Penny Dreadful”, while the character of Dorian looks about as classy as Kim Kardashian and Kayne West as Disney characters, he is a man who is over absolutely everything but will try anything. As he says at one point in the episode, “I never say no.”. With Brona, it is not just the act of photographing himself having depraved sex with this woman, but her sickness. At one point, she coughs up her fatal blood in the middle of picture. While anybody else would react with repulsion, Gray does so with arousal, Brona’s inevitable death is his pleasure.

The actors are, as expected in fine form. I sung my lays for Eva Green’s Vanessa’s incredibly composure last week, however this week, under the influence of this demonic entity, Green chews that scenery like nobody’s business. Those incredible eyes of her, the modulation of her voice and the contortion of her face all lend to a show-stopping performance. A few folks have called her acting hammy, but acting like your mind and body has been taken over by a nethercreature is no easy gig and in my eyes, Green’s work here is among some of the best I have seen in recent years. On the other end of the spectrum, Dalton is stoic and steady- on the outside he abides by the social mores imposed upon his sex and standing, but on the inside, underneath the skin, you can see a man who is struggling to keep his will and wiles together. When demon-possessed Ives viciously accuses him of unspeakable things, you could swear that Dalton is struggling to keep tears of grief and a bellow of rage back. Dalton has always been fantastic at talking with his eyes and here is no exception.  He shares a valuable and unique chemistry with Danny Sapani who portrays Murray’s man and loyal retainer Sembene. I hope to Godfrey Lijah there will be more sequences between them. Special kudos must also go out to Harry Treadway and Alex Price as the Good Doctor Frankenstein and the Creature (known colloquially as ‘Proteus’, geddit?) respectively. There is a curious dynamic between them in being that Victor does not treat his creation as an abomination, but, appropriately so, his child. A disfigured, strange child, but props to Victor for stepping up to the plate as creator and parent.  I felt that Reeve Carney was miscast as the immortal douche-dollar Dorian Gray. Carney presents Gray as a very dirty, almost vagrant looking man who doesn’t appear to have any pride in how he looks and clothes himself. In the book, despite his fatally narcissistic ways, Gray physically resembles the upper crust of society- he dresses himself carefully, takes stringent care of his face and body and knows how gorgeous he is. Carney isn’t a bad looking fellow at all, but making this Dorian a lecher who hasn’t heard of a bar of soap somewhat defeats the purpose of Gray. Gray is about beauty and excess- Carney is all about the excess and none of the beauty. I’m wondering if this was a deliberate deviation in order to further the plot progression, but I can’t say I was a fan of this initial development. We’ll see how this goes in future.

Additional note: Helen McCrory is such a fine, striking actress and I felt her glamorous high-society medium Madam Kali was hideously underused. What gives, guys? Give her more to do!

While last week’s “Night Work” was a set up first and foremost, “Seance” I feel will be part of a much bigger pay-off. So many seeds of intrigue and uncertainty have been sowed for every character thus far and at present, all of them seem very interesting. I am merely speculating here, but I have a niggling sensation that Ethan could be in some way or another connected to Jack The Ripper. If you really consider it, why didn’t he act so surprised when news of the dead street-walker circulated around the streets? And then there is a curious wire he receives from an unseen individual who calls themselves Chandler’s father about “settling legal problems”. In my opinion it would be far too obvious if Ethan WAS Saucy Jack, because “Penny Dreadful” doesn’t seem the series to be so obvious. Perhaps it is not the Ripper, perhaps it was Vanessa, what with her being so susceptible to spiritual contact- is she being used as the puppet to some dark being’s will? Or is it Malcolm, there is only so long until he fully snaps with worry for his daughter and unresolved grief of his dead son. Or perhaps it’s Frakenstein who wants to make a wife for his Creature and selecting donors who nobody cares about? Who knows? I will tell you one thing though, this could turn into quite the drawing room/opium den murder mystery, one I am eagerly waiting to be resolved.