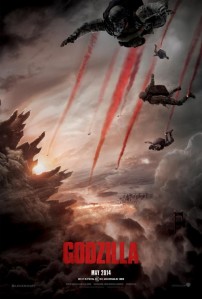 It’s hard to believe that it has been 60 years since everybody’s favourite giant movie monster Godzilla first appeared on the big screen in 1954’s GODZILLA (or as it was known as under its original Japanese title GOJIRA). Not only that after his very first appearance, he would become true icon of Japanese cinema and would go on to star in over 28 films (his last big screen appearance would be 2004’s GODZILLA: FINAL WARS).

Based the success on this series, Hollywood was very interested in making their own film featuring the beloved monster. After years of development, Hollywood finally released their remake of GODZILLA in 1998, which was directed by Roland Emmerich. Unfortunately the remake didn’t work out at all (to put it nicely) as it was hated by both critics and fans. After that, Hollywood decided not to make anymore GODZILLA films until they were able to get it right. Now 16 years later in 2014, Hollywood has decided to reboot the franchise once more and brought young British director Gareth Edwards on to direct. So does this reboot finally succeed in giving Godzilla a major Hollywood film that he truly deserves? Read on and find out!

The film tells the story of Lieutenant Ford Brody (Aaron Taylor-Johnson), a young explosive disposal technician, who lives with his wife Elle (Elizabeth Olsen) and son Sam (Carson Bolde) in San Francisco. One day he receives a call from the Japanese police informing him that his father and former nuclear physicist Joe Brody (Bryan Cranston) is in jail for trying to trespass at the old abandoned nuclear plant that he use to run in Janjira, which was destroyed by an Earthquake 15 years earlier. Joe believes that an Earthquake wasn’t responsible and that the government covering up what really happened. He convinces Ford to help him get back there and find out what’s going on. When they get there, they are picked up by a group of soldiers who take them to meet a scientist named Dr. Ishiro Serizawa (Ken Watanabe). Ford and Joe discover from Serizawa that the plant was destroyed by giant creatures know as M.U.T.O.s (A nickname that’s short for Massive Unidentified Terrestrial Organisms) and that the organisation that he works for has been studying them for years. Soon they also find out that the M.U.T.O.s aren’t creatures that are out they should be afraid of, that other creature is giant monstrous lizard that goes by the name… Godzilla.

I should state that there is a bit more to the plot than that but I decided not to reveal what else happens in the story, mainly because it would go into spoiler territory. But what I can say that if you are worried that would be another disappointment like the 1998 Hollywood remake, I can tell you right now you have nothing to fear. As a big fan of Godzilla, this film definitely lived up to my expectations. It truly was an awesome film that I had a great time with from beginning to end. Not only is it both entertaining and compelling, it also brings both the epic sense of awe, scale and wonder that a film like this should have. I believe this was due to the film’s director Gareth Edwards. While watching the film, you can tell that he has an absolute love for Godzilla and wanted to give him a film that does the character justice. I must admit that I did wonder how he was going to handle making the jump from his directorial debut the micro-budgeted indie sci-fi film MONSTERS (a solid and impressive film that was shockingly cost under $500,000 to make) to a huge big budgeted $160 million blockbuster like this one.

Luckily Edwards handled the transition to the big leagues like a pro. He does a truly terrific job with his direction. It such a confidentially made film from him that you would honestly think that has he been making blockbusters for years. You can tell that he definitely channeling Steven Spielberg when it came to his approach to his direction. The way he stages scenes and set pieces remind me a lot of Spielberg’s great blockbusters (Edwards even does both some references and homages to him during film). It helps that has a great collaborator in Oscar nominated cinematographer Seamus McGarvey (ATONEMENT, ANNA KARENINA and THE AVENGERS), who does some incredible work here. The film looks spectacular and every single shot that they both create is brilliantly put together (there are shots that I’m not going to forget in a hurry). One of the things that surprised me the most about the film, was the tone. I will say that despite what the trailers and marketing have made you believe, this is not a dark and gritty Nolan-esque reboot that goes back to the tone of the original 1954 film (or even 1984’s THE RETURN OF GODZILLA for that matter). But don’t worry the film does still take a grounded and serious approach to the story, but it isn’t also afraid to be fun with it as well. In fact when it comes to the film’s tone, it feels very Spielbergian. It feels more along the lines of JAWS, WAR OF THE WORLDS and, especially, JURASSIC PARK.

Now you’re probably wondering, what about Godzilla himself? I can safely that Edwards and the CGI animators a terrific job bringing him to life in this film. Godzilla in this film is an amazing CGI creation and they were able to capture every aspect of what we love about him. Also I love the film takes the JAWS approach by taking its time to reveal him by only showing bits and pieces of him until we finally shows him in all his giant massive glory (which is great intro that honestly made giddy as a school girl). Some people may be bothered by the slow build-up (Godzilla doesn’t make his first appearance until nearly 50 minutes or so into the film), but personally it didn’t bother me at all and it was refreshing for a modern blockbuster to do that rather showing him right away. The rest of the visual effects in the film are terrific as well, the Muto creatures were also extremely well designed too and made good foes for Godzilla. The monster fight sequences themselves are both really entertaining and well staged (you can feel the weight of these creatures as they battle each other).

On the human side of things the entire cast all do a solid job with their roles, even if their roles are basically the same type of characters many times before in other monster films. But the stand-outs of course being Ken Watanabe and Bryan Cranston, who both give an extra layer to their role and give really good performances. Also the score by Oscar nominated composer Alexandre Desplat (ARGO, THE KING’S SPEECH, ZERO DARK THIRTY) is terrific! It’s the perfect and memorable monster movie score. Plus the are moments and references that are definitely going to have Godzilla fans jumping in excitement (I won’t say what they are, but you fellow fans out there will know when you see them).

Now in terms of negatives while I do really like the film, I must admit that there a couple of flaws that stop it from being a truly great Godzilla film. While the script (which was written by Max Borenstein, from a story by David Callaham) for this type of film is solid but I wish that could have done a lot more with it. Particularly when it comes to the character development. As I said before while I did think that all cast were solid in their roles, unfortunately I found nearly all the characters rather under-developed. Which is a shame cause the film spends a lot of time trying to get us emotionally invested in the characters during its running time, but sadly we never truly are. Especially Aaron Taylor-Johnson’s role as “Ford”. His performance is fine but the character just isn’t that interesting or compelling.

The other actors do make the most of their roles as well but for some of them, there is not much they can do with their under-written stock characters (Juliette Binoche and Sally Hawkins in particular are criminally wasted). Although the only actors who come close to having real characters are, as I said before, both Watanabe and Cranston (whose character is the film’s true emotional centre). I think if the Borenstein did another rewrite or two on the script and delved more into characters, it probably would have been an even better film (maybe even the best one in the whole franchise). Also while both Godzilla and the M.U.T.O.’s backstories are briefly explained in the film, I do wish that they were explored just a little bit more (especially Godzilla). Plus the films does have the occasional plot hole, story contrivance and the dialogue sounds more exposition at times (but I can forgive those things, since this is a GODZILLA film and all).

3D Note: I saw the film in 3D and I have to say I while it wasn’t amazing by any means (it’s definitely one where you don’t necessarily have to see in this format), it was still pretty solid. Especially during some of the film’s big action set pieces.

Overall while it does have flaws that stop it from being an amazing film, it’s still a pretty damn awesome reboot of the GODZILLA franchise. Its definitely one that’s both going to bring Godzilla back into the public consciousness and as well as open many doors for director Gareth Edwards. If you’re a fan of the series as I am, you’re definitely going to have a ball with this film. Even if you are not, there is still a lot here to enjoy and have fun with. It’s definitely worth checking out for sure but if you do, try to see it on the biggest screen possible. You won’t regret it.