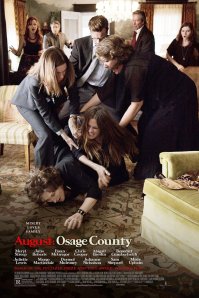 AUGUST: OSAGE COUNTY began life as a play written by Tracy Letts, Tracy in fact won the 2008 Pulitzer Prize for Drama with this piece. Inevitable it seems that this piece would become a feature film, and nicely on a screenplay that Tracy wrote. With director John Wells (THE COMPANT MEN) at the helm and a cast consisting of a large array of talent, the ingredients for success are there. Having not seen or familiar with the actual play, this experience was very new to me. However having seen another Tracy Letts play become a film with KILLER JOE, there was an expectation present of how it may be. Those expectations were met, but this film went into areas that were not expected and the real triumph here is the cast.

The film is about the Weston family, whose patriarch Beverly (Sam Shepard) goes missing, bringing together the other members of the family to the matriarch Violet (Meryl Streep). There are three Weston daughters, Barbara (Julia Roberts), Ivy (Julianne Nicholson) and Karen (Juliette Lewis), and the mixture of all their baggage plus their mothers proves to be too much over the course of these few days. The toxic energy surrounding the family will have lasting consequences.

It may or may not be clear as to why Beverly is missing, however living with his wife Violet, whom he not doubt loves but is a bitter old woman may provide a few clues. Violet has cancer, takes enough drugs a day to cover 30 people for a month, she smokes and basically does not have much of anything left. She resents her eldest daughter Barb for moving away, Ivy has stayed closed but it seems to not matter and Karen has lost all touch with her family that she is blind to what is happening. To say this family is dysfunctional is very much an understatement and it isn’t difficult to see why. With Violet being the way she is and her sister Mattie (Margo Martindale) not exactly being lovely herself, there isn’t much their own children can gain from them.

The themes tackled here are those of family, but also of addiction, depression, incest, hatred and self loathing. At times this is not an easy watch, but at the same time one simply cannot look away at the madness. There is something in this film that feels all too familiar, the toxic words or the dysfunction, we all have issues with family, perhaps not all of us to this extent but it rings true. At the same time it does bring forth an interesting element as to whether the daughters will repeat the sins of their mother. As much as they try to fight it, she remains present in their lives and ultimately as we can see they need that strength to do something about it, as seen with Barb.

The real power house element here is the performances, with a cast that is perfectly suited to their characters. Meryl Streep plays a character we don’t often see from her, and it is easily one of the best performances from her in recent years. Violet is not a person anyone would want to become, and she makes that comes across in spades and while she spews out those hateful words, she brings forth a strange sympathy as well. Julia Roberts has really broken away from the norm here, this is a character foreign to her and she does such a great job, it is easy to forget we are seeing Julia Roberts. With these two receiving well deserved Oscar nominations, they have really broken down a barrier. Yes, these are the stand outs here but the entire cast is fantastic, and memorable. Each brings something to their character and to the group as a whole.

John Wells and Tracy Letts have made a great team here, the chemistry between director and writer was there. Letts words with Wells direction is firey and in a way addicting to watch and listen to. This film has a running time of 2 hours but that time flies by, it is paced extremely well and there really is never a dull moment. Perhaps too over the top for some, this is a film that needs the right mood behind it. Be prepared for it, and embrace the madness within. Everyone who sees this film will no doubt take away something different. After this viewing experience I would one day love to see the stage play.