Alrighty-roo, my very first television series review! I have not done something like this before, believe it or not, but damn it I will give it the Brownie try!

When I saw the first trailer of NBC’s shiny, ‘sexy’ rendition of Bram Stoker’s literary child I wasn’t sold, quite the opposite, I really did not think much of it at all. When Irish pretty boy Jonathan Rhys Meyers raises his Irish pretty boy head, I said, quite literally out loud “NO.” Maybe it’s the fact vampires are now officially the most over-blown way of making money, but I was vehemently opposed to it. Yes, I totally knee-jerked, but while I am by no means a purist of the novel, when I think of Dracula, I don’t think of an Irish pretty boy. I think of a powerful, dominating and vaguely terrifying man. So, as time drew closer, like a sucker I still kept an ear to the ground in hope that Meyers would either bow out or it would present something new to the table. After my initial outburst, I wanted to take the opportunity to be fair- there is no reason not to enjoy a TV show when it has one actor who you don’t enjoy. When October 25th rolled around like a Yeatsian beast, out of my civic duty to SM.com and my own Draculian curiousity, I threw up my hands and sat down, though not expecting great things.

Well, now. This actually not bad at all, dare I say good… not great, not astounding, but good, even quite respectable. Considering this is a BBC series, there is a level of quality attached to it and I am happy to say “Dracula” is no different. Well past the period of me being absolutely fastidious about wanting to see a true book adaptation, I think I had more of a good time that I would have anticipated. In addition to the Gothic goings on, it ain’t afraid of some mean bloodshed, I mean wow, I was taken aback and how liberal the bloodshed was. Oh, and yeah, it was kinda sexy.

The acting in general is reputable, the look is opulent and the concept execution is distinctly high-brow if not original. While it follows the same love story as “Bram Stoker’s Dracula” (Dracula wanting to be reunited with his reincarnated wife), there are other things at work that deserve the nodding of the head. For one thing, the role of Dracula is reversed to that of a good guy who is prone to the occasional throat-rending. Although Meyers has not won me as Dracula, the character he plays here suits his talents well. I have noticed Meyers has made somewhat of a career by playing parts in contemporary updates of tales gone by- “Dracula”, “The Tudors” and Julie Taymor’s “Titus”… I actually think this type of thing is his niche because he plays it sellf. He does not have the requisite conqueror’s edge that Stoker’s creation has, but he is more of the noveu-money Victorian businessman Casanova Alexander Grayson who has come to the States to share the bounty of seemingly infinite electricity.

As for the rest of the cast, they equip themselves admirably. Jessica De Gouw who portrays a memorable Mina Murray (she has such an expressive face), Oliver Jackson-Cohen is given the notable role of Jonathan Harker, whom Mina is bethrothed to who will stop at nothing in order to ascend the ranks of aristocracy. Kathie McGrath is highly likeable as Lucy Westenra, Mina’s best friend who shares a lovely chemistry with De Gouw and Victoria Smurfit portrays Jayne Weatherby who brings firm appeal to her character who basically is immediately smitten by Dracula the moment he shows up- why not, right? That is if that was the only revelation about her.

To me though, the actor that really stood out the most was Thomas Kretschmann who delivers a take on Professor Abraham Van Helsing that will no doubt garner praise. He defines such an unusual yet wholly effective persona to the role that does no rival in madness as Tony Hopkins’ practically certifiable version, but he’s not the comforting, authoriative and stable force that Peter Cushing contributed. He’s got the potential for insanity, but he is more than strong enough to hold it in… for now. Another standout actor with a standout character is Nonso Anozie as Renfield who is anything but a giggly, mentally-unbalanced nutbar. There is more than meets the eye to this character, I’ll be sure to keep my eye on him. 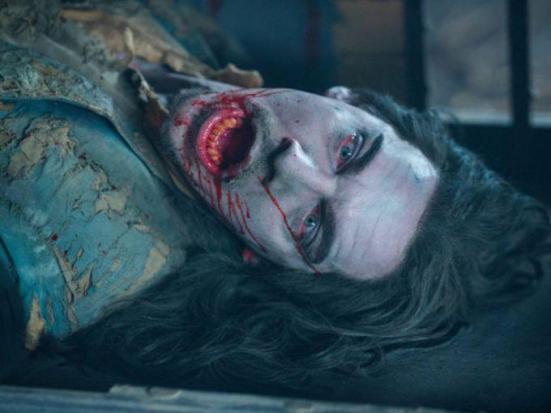 As for the story itself, yeah, it’s handled as well as something of it’s calibre should be- there is a definitive vision the director and creative crew wanted to instill and for the most part, it works. Not only that, but there is also a surprising amount of thought put into the writing- yes, it is a melohorror (melodramatic horror), but considering the universe all of this is taking part in, it’s understandable, heck, even encouraged. Not only is the story promising, but the visuals are drop-undead gorgeous, favouring a steampunk approach which doesn’t seem too out of place. Considering the series is taking place at the turn of the 19th century, the old world was tentatively making way for the new one.

That being said, I would like to share my concerns that this show will take itself far too seriously- ideally there should be grounding, but I hope this series does not take the “True Blood” route and incorporate lycanthropes, demons, fairies, witches and unicorns- there needs to be limitations and it’s far too early to tell if “Dracula” will abide by this. While I am also aware that television features do not receive nearly as much funding as their big screen peers do, I also hope that the series does not lose it’s look- sure it looks and sounds lush and lux now, but as the story continues and the webs woven by each character grows bigger, hopefully the budget will keep up.

All things considered, there is a lot of life in this what could be a massively successful and profitable 10-parter. It looks and feels great, I only hope the next nine weeks can live up to the promises made here. In the meantime though, NBC’s latest gets a seal of chaste approval from me- Meyers still ain’t The Vampire King though.

One thought on “TV Review: NBC’s Dracula 1×01 by Bea Harper”