As this humble schmoe has stated on a number of occasions, 2021 was a stellar time for the House of Mouse and the empire that Stan Lee/Kevin Fiege built. Completely wondrous to behold as casual and obsessive fans alike reached a hightened state of comic nirvana, complete with zen-like enlightenment and thought-bubble fulfillment. Even though the global pandemic messed up the company’s release and production schedules, strangely enough, everything lined up perfectly for the big and small screens last year. There was more content than anyone could handle. And it was pretty freaking Marvelous. Pun implicitly intended.

On the big screen, we had the mature and violent Black Widow (2021), the culturally significant Shang-Chi and the Legend of the Ten Rings (2021), the cosmically dynamic Eternals (2021), and the legitimately pure fan servicing Spider – Man: No Way Home (2021). And of course, on the small screens of the Disney+ streaming service, we had the ambitious nature of WandaVision (2021), the powerful political intrigue of Falcon and the Winter Soldier (2021), the expansive reality-breaking fantasy of Loki (2021), the distinctive boldness of What If? (2021), and the yuletide exuberance of Hawkeye (2021). Each respective project brought its own vigorous execution, flavor, and excitement for audiences to watch, analyze, and obsess over. These babies had it all and cranked the mythology, reverence, and accuracy up to a million. We were certainly blessed by the comic gods that’s for sure! 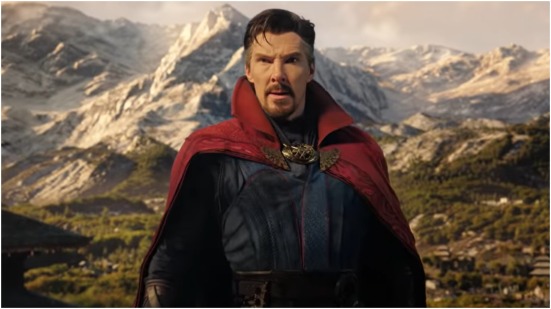 And now, this year, the studio that redefined longevity and consistency has more projects on the horizon. And so far they haven’t disappointed with the first being a limited season of an entirely new character to the universe, and the company’s multifaceted answer to a psychologically afflicted Egyptian superhero; Moon Knight (2022) — A thematically bizarre but addictive series that ended up becoming deeply character driven and richly exhilarating. Highly recommended.

Next on the itinerary is Dr. Steven Strange — marvel’s master of the mystic arts and the sorcerer supreme, whose one of the most powerful heroes in the comics and films. Though sadly, the good doctor hasn’t had his own solo story since 2016, save a few crucial appearances in other films since that time. Enter legendary director Sam Raimi; the originator of campy, energetic horror. Believe it or not, the second choice and replacement for director Scott Derrickson but a far superior one if I do say so myself, as the studio revamped the entire sequel to accommodate Raimi and what his devilish ideas bring to the table. Needless to say they struck demented gold as Doctor Strange and the Multiverse of Madness (2022) is an insanely engaging and balls to the walls rollercoaster ride through magic, mysticism, and reality that dances to the beat of its own wacky drum and nearly demolishes the boundaries that Disney/Marvel have accommodated for in quite some time. How do they do that? Well, by allowing Sam Raimi to be Sam Freaking Raimi and unapologetically transform a MCU entry into a bonafide horror film with superhero flare and grandiosity. It’s a match made in heaven and hell….and comic nirvana.

As the story goes, after saving the world and dealing with magical threats, Dr. Strange (Benedict Cumberbatch, putting in a solid showing as always) is trying to obtain some semblance of normalcy in his extraordinary but difficult life as a former sorcerer supreme. Of course that task is short-lived when he and the current sorcerer supreme, Wong (also solid Benedict Wong) rescue a young woman named America Chavez (Xochitl Gomez, a delightful debut) from a tentacled demon trying to kidnap her. After the save, Chavez informs the duo that she’s from an alternate universe and is being pursued by other demons who want to acquire her cosmic power to open portals through the multiverse. Curious about where this threat is coming from, Strange goes to fellow magic user and avenger Wanda Maximoff (Elizabeth Olsen, the MVP of the entire film) for assistance only to quickly discover that she’s the one whose actually after Chavez. Turns out, Wanda wants to absorb Chavez’ powers in order to travel to a universe where her beloved, departed children, Billy and Tommy Maximoff (Julian Hilliard and Jett Klyne) are still alive, as she’s stricken by rage, trauma, and magical influence over her loss in this universe. Now, Strange and Wong must do everything they can to protect Chavez and stop Wanda before her plans annihilate an unsuspecting universe. A brutal tale of spells, wizardry, and madness ensues.

Right of the bat it must be noted that this sequel has Raimi’s visual style and fingerprints all over it in the best conceivable way. Despite the fact that he possesses plenty of experience in the comic adaptation game since directing the Spider-Man trilogy (2002–2007), this particular feature has more commonality with his classic Evil Dead trilogy (1981–1992) than any other works. All of Raimi’s tricks and signatures are on display here, which is equal parts jarring and impeccable. The point-of-view perspectives, rushed strides, overhead shots, slow-motion, colorful dynamism, erratic energy, tilted pans, shaky jump scares, bombastic sound, and freaky creature designs. If you’re a fan, it’s unmistakable. He knew exactly how to utilize his dark methods in order to accentuate the epic but surprisingly graphic story, as well as our character’s actions and enormous surroundings. The atmosphere and aesthetics are colossal and even in its subtler moments, never loses an inch of its eccentric momentum. 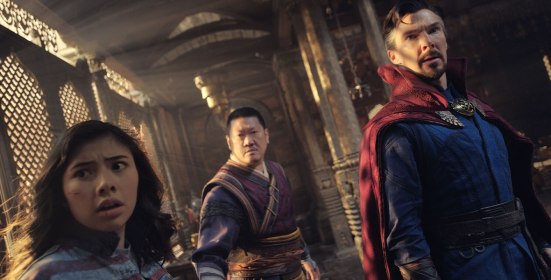 There’s sequences and moments in the journey that are simply jaw-dropping. This film goes for it. And I mean GOES. FOR. IT. in terms of crafting a violently awesome comic/horror story that inventively surprises, energizes, shocks and delights. It’s no secret that most of Marvel’s extensive catalog follows a guideline when it comes to plot and narrative, and some of the usual tropes remain that we’re used to, (Quips, references, easter eggs not to mention utterly fantastic and uncanny cameos. OH GOD YES!) but what’s on display here thanks to Raimi’s execution and concepts makes this one of the studio’s most unique offerings. Which is really saying something because last year had plenty of refreshing and enjoyable entries. This easily stands next to those homeruns.

Bottom line this madness collectively brings a sensationally grand combination of frenzied craziness, sadistically nasty chills, superb thrills, wacky hilarity, dazzling special effects, and tons upon tons upon TONS of comic book magic. Everything culminates in a rousing and visually magnificent experience that not only continues to expand the universe and multiverses, but is the best of both worlds in the genres. Sam Raimi continues to prove why he remains an ingenious master in his own right, defying conventionalism and knocking our socks off. And Marvel/Disney keeps on winning, with us reaping the rewards in splendid fashion. Not a surprise on this end. Not in the slightest.