If you’re reading this and have not experienced this delightfully eccentric film, I implore you to go check it out because while this review isn’t spoilery, watching this flick as blind as possible is not just essential, but crucial. Yet, if you’re curious over this humble schmoe’s opinion, then by all means proceed and continue reading.

Well, well, well… This was certainly a garish and fantastical surprise. At this point in Hollywood, writer/director James Wan’s ability to re-create classic fear and tension that revolutionized the institution of horror since its creation is well-praised and well-documented. I’ve stated before that thanks to his incomparable work on The Conjuring Universe (2013 – 2021) as well as Insidious (2010), Wan has brought intelligence, sophistication, and enigmatic storytelling back in true momentous fashion to the haunted house sub-genre. His masterful techniques, attention to detail, and unmatched direction has proven to sanctimonious naysayers that horror as a whole is as artistic in presentation as any other genre without sacrificing identity, competence, or entertainment value. Not only that, Wan knows how to craft enticing and incredible entries in other franchises or institutions not his own if Fast and Furious 7 (2015) is any indication. And last but certainly not least, at the beginning of his career with the masterpiece that is Saw (2004), he’s emphatically created his own sub-genre that’s going strong to this very day. Talk about revelatory consistency. But I digress.

Now, after three years since his last directing project with DC’s Aquaman (2018), Wan is back in the leading chair, conceptualizing and writing in the genre he helped revitalize and recontextualize. Only this time around, distinction is the name of the game. And apart of that very distinction is to throw as much at the screen as humanly possible and swing for the metaphorical fences in regards to crafting something horrorhounds and casual audiences will enjoy. The collaged result is simply known as Malignant (2021), one of the most fascinating and unpredictable rides of the year.

As the story goes, after surviving a terrible maternal loss, soft-spoken Madison (Annabelle Wallis putting in a solid showing) starts experiencing intense visions of people being brutally murdered. After investigating the strange occurrences, the fretful woman and her flighty sister, Sydney (a perky Maddie Hasson), discover that her visions are actually taking place in reality. Now, Madison must figure out the dark connection between herself, the mysterious killer, and these not-so-random deaths. However, little does she know, this evolving nightmare is just. getting. started.

When I stated that Wan swung for the fences, that was no exaggeration. He REALLY swings. And when I said he throws as much as he can into the story, he uses everything in his arsenal, and then some. And then some MORE. He dynamically goes for it with an unfaltering passion and fire of a thousand suns. Unlike his previous fares, this is not a haunted house story but a new breed. An entirely different feature that carries a multifaceted motif, multi-decade influences from the schlocky camp vibes of the 70s/80s, the slasher relevance of the 90s, and the crisp special effects of present day. Also in a move that would make Patrick Bateman proud, there’s a highlight on video tapes in the story as well. There’s even a historic and modern Seattle setting that’s just as surprising as anything else. Especially for someone who lives in Washington State like myself. And draped across all of it is the gritty, pervasive stylization of Giallo and Lucio Fulci films. You could easily tell Wan drew heavily from them with the execution as he implemented encompassing lighting, immersively colorful tints, and a jarring score as well as the refined skills he’s honed over the years. Combined that with cinematographer Michael Burgess, this becomes an effectively beautiful film with stunning shots, transitions, and scope. Artful and powerful in presentation, which really added to the thick. progressively dark atmosphere and tone in a gigantic way.

One of the best additions to the proceedings is a welcomed, predatory element to some of the camera motions and angles during a few suspenseful sequences. The sudden zooms, creepy leering, and clever placements really elevated the scares and tension during those moments….very The Evil Dead (1981) in that regard. Say it with me now – Groovy. 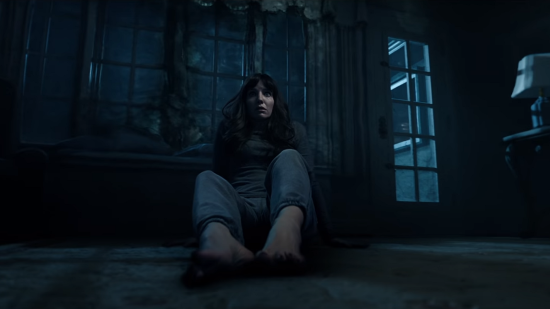 And as if that wasn’t enough, true to Wan’s inventive repertoire, the first half of the story garners plenty of mystery, spooks, and surprises, yet act as a precursor to one of the most bizarre and dementedly thrilling third acts I’ve ever seen. Equal parts Shyamalan twist, Tarantino action set piece, Sam Raimi blood-bath, and even a sprinkle of Lovecratian body horror, this act is pure, unadulterated nightmare fuel of the best kind and an indicator that Wan wanted to really break away from the confines of his own throwback creations. It definitely needs to be seen to be believed. Wowzers.

There’s a plethora of avenues you can take to decipher and examine this tale as a whole. In a way, it’s understandable why so many critics and viewers alike are falling in love or utter hatred with this. Certainly wears its conventional unconventionalism like a badge of honor or walk of shame. Or both. However, for this schmoe, I took it as an indomitable, confusing, batshit journey into the abysmal depths of hammy horror. A transmogrifying visual meal for the eyes that ferociously rattles the senses in THE most satisfying manner. Needless to say, James Wan has done it again, conducting one of the most awesome and perplexing symphonies of terror to come out in awhile. While it may be a cancer to others, it was certainly music to my ears. Such is the infectious nature of this devious, malevolent treat.

One thought on “[Review] Malignant (2021) by Marcus Wilturner”