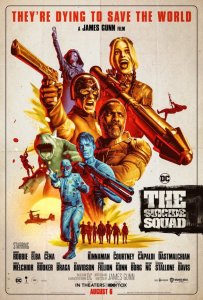 The battle between Marvel and DC over brand supremacy has gone through a plethora of conquests and failures, consuming the lives of millions, creator and consumer alike over the years. Beyond that the enthralling, sporadically friendly, but often times incessantly toxic rivalry between nerds and purists over these creations has been ongoing as well, especially with film and television adaptations. Mainly the Marvel cinematic universe (MCU) and the DC extended universe (DCEU). Many of us have contributed to this, either before or presently. It’s brought out the best and worst of our geeky natures and our humanity.

BUT, there’s a silver-lining …

The ever-growing numbers of those who walked away from the “war” and shirked the fandoms for a less stressful existence have come to an exhilarating revelation — At this very moment, we’re living in a golden age of content. Yeah I said it! And I’ll say it again – We’re living in a GOLDEN AGE people! One that never completely existed over a decade ago in the superhero genre, or at least not to the extent it does now. Because more than ever before, we as an audience and fans have been receiving bonafide quality that’s richly deserved. And that very quality has reached numerous pinnacles within the genre, proving beyond a shadow of a doubt that these projects are NOT mere theme park rides with a modicum of substance. Nope. These are standalone, connected, or larger than life features with reverence, storytelling, intelligence, and depth.

Now we’ve reached another peak of excellence within the genre, the same peak that The Crow (1994), Oldboy (2003), A History of Violence (2005), Sin City (2005), Persepolis (2007), The Dark Knight (2008), Scott Pilgrim vs. The World (2010), Logan (2017), Avengers Infinity War (2018), Avengers Endgame (2019), the Watchmen (2019) HBO series, and a few others reached. I said this earlier in the year and I’ll reiterate now — Some visions, despite the most inane efforts, can not be forsaken. Nor can they be contained, compromised, or forgotten. Some visions have such an indomitable power and longevity, that it can’t help but gain notoriety, exposure, and complete realization. By any means necessary. I stated this once before after watching the near-masterful Zack Snyder’s Justice League (2021), and NOW I’m saying it for writer/director James Gunn’s The Suicide Squad (2021).

The plot is simple – Amanda Waller (Viola Davis), head of the secret government organization A.R.G.U.S., recruits incarcerated supervillains Bloodsport (Idris Elba), Peacemaker (John Cena), Ratcatcher 2 (Daniela Melchior), Polka-Dot Man (David Dastmalchian), and King Shark (Sylvester Stallone) for her covert black ops team Task Force X. Along with a bunch of other villains including Harley Quinn (Margot Robbie), Captain Boomerang (Jai Courtney), Savant (Micheal Rooker), TDK (Nathan Fillion), Weasel (Sean Gunn), and led by the iron willed colonel Rick Flag (Joel Kinnaman), the team is sent to the South American island nation of Corto Maltese in order to destroy a secret experiment before it falls into the wrong hands. Namely the hands of the dangerous regime that just overthrew the government and took over the island. And honestly that’s all you need to know because before the credits begin, this story gets explosive and graphic fast… and doesn’t completely let up until the end credits. Groovy.

Coming in like a wrecking ball, Gunn takes what was initially left behind after David Ayer’s monetarily successful yet publicly shunned Suicide Squad (2016), and writes/directs a soft reboot/sequel that draws upon the modernized source material of the comics, his own ideas, influences, and shoots this long-standing premise into the stratosphere. Also thanks to Warner Brothers Studios NOT interfering this time around the film dances to the beat of its own drum in the best possible way. From wacky tone, dark humor, ultraviolence, and gorgeous cinematography, to encompassing aesthetics, exceptional special/practical effects, bold references and diverse performances, Gunn’s vision fires on every cylinder and presents an absolute version the way it was meant to be experienced. Almost radiating off the screen, drawing you in and never letting go. Gunn’s magic definitely works wonders here for the DCEU’s tenth film as it did for the MCU’s tenth film, Guardians of the Galaxy (2014), which he also wrote and directed. Phenomenal work. See what happens when you let creators CREATE?! Pretty wild huh? But I digress.

Anyway, even with Gunn’s self-assured, creative, and eccentric style draped across the screen, he keeps a crop of easter eggs and references coming as well including a slight nod to one of his earlier films Slither (2006), a few jabs toward Joss Whedon’s Justice League (2017), a cameo from one of the writer/creators of the modern Squad comic, John Ostrander, other DC villains showing up, and a blink-and-you’ll-miss-it appearance from a certain Guardian of the Galaxy that’s pretty great. There’s always something to keep an eye out for in this vibrant film which is apart of the bonkers fun.

One of Gunn’s best attributes as a filmmaker besides subverting expectations within a story is how he’s able to tonally balance this all out, particularly in quiet moments when there isn’t a cause for levity. And most of those moments lead to an analysis on these villains. Much like the heroes in this universe, these people didn’t wake up one day and decide to be immoral, murderous, or scums of society. (Though there’s a few who can’t even get that right) An abundance of traumas, horrible upbringings, dire circumstance, and good old fashioned shitty luck played a significant role in each of their metamorphosis. While few embraced the change, forming their own shaky or hypocritical perspectives within it, others fell reluctantly into it, forming their own code to never cross the line…at least not too much. All of it was a great reminder of something a certain God of Mischief once said, “No one bad is ever truly bad and no one good is ever truly good.” This story does a stellar job of bringing that to the surface, humanizing this group in a big way, giving us the chance to sympathize and root for them as they try to do some good and regain pieces of their souls.

These aspects of the film is the personification of how and why this type of team works in the current climate as well as the comic world. There’s even a slight examination on American imperialism and how our government hypocritically interferes and operates in foreign countries. Yep, that’s right, this silly little comic book film even takes a few shots at more serious real-life issues in the world than what befalls these characters in this imaginary universe. Whodathunkit? 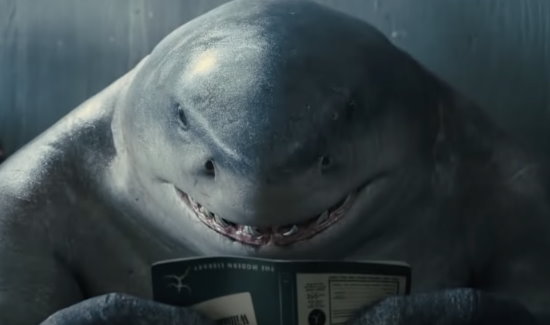 Which leads to the performances and this baby is overflowing with talent. I dare say this is one of the best ensembles I’ve seen this year. And by now, I’m certain everyone has their favorites. Personally though I liked or loved all the players, because Gunn gave everyone personality and time to shine or develop. Each character makes an impact in some way, as they should. My personal favorites was Elba’s cool-as-ice badass Bloodsport, Cena’s psychotically patriotic Peacemaker, Melchior’s adorably capable Ratcatcher 2 (Her pet rat, Sebastian, even had personality. Also voiced by Dee Bradley Baker), Stallone’s simple-minded yet starving King Shark, and Davis’ steely and bureaucratic turn as Waller, who’s by far the most intimidating villain in the film. Also the main reason I consider this a semi-sequel is because of Robbie’s wonderful showing as the insane yet emotionally developed Harley. She owns that role and it’s always a pleasure to see her rock it. And last but certainly not least is Dastmalchian’s amazing turn as the awkwardly tragic and deadly Polka-Dot Man. Everyone in this cast worked so freaking well together with their banter, chemistry, and acting as each other’s comedic foils. Again, one of the best ensembles in any film this year….or ever.

There’s already been comparisons and speculations as to what this film undoubtedly is. DC’s answer to Deadpool (2016)? Yep! Gunn’s satirical love letter to the genre? I’ll buy that. DC’s version of the The Dirty Dozen (1967) and The Wild Bunch (1969)? I could see that parallel emphatically. But honestly whatever conclusion you come to, there’s little denying this is another home run for the DCEU, the genre, and cinema in general. It’s a miracle of mayhem, a hyperbole of hilarity, a cataclysm of chaos, a cue of quixotic quirkiness, a symphony of sadism, a vehemence of violence, a captivation of creativity, and lastly, another peak of excellence in the superhero genre that’s been going strong for years. Like I said, we’re in a golden age, and this has contributed to it in the most unapologetic manner, nom-noms and all. So believe the hype because the squad is love. The squad is life. The squad is gold. James Gunn — You did it again, you magnificent sonofabitch!.

One thought on “[Review] The Suicide Squad (2021) by Marcus Wilturner”