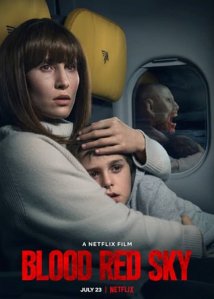 Netflix has been on a roll for as long as I can remember. Seems like every time a breath is taken or a day passes, they’re releasing a film or series to either entice, thrill, or disappoint hardcore bingers and casual consumers alike. At this point it’s nearly impossible to keep up with that schedule so it helps to pick a feature that screams out as a viewer and simply go for it, because more content will be released in its place in no time. And this year alone with over 100 projects and counting, there’s no signs of slowing down for THE leader of streaming services.

Anyway, one of the many concepts that caught my proverbial eye and peaked my curiosity was Blood Red Sky (2021), a high-octane, high-altitude, splatter-filled trip that connects the violence and familial sentimentality across the unfriendly skies. A wonderful combination if I do say so myself.

As the story goes, a timid widower named Nadja (Peri Baumeister) catches an overnight transatlantic flight from Germany to New York City with her precocious, independent son Elias (Carl Koch) to visit a medical facility and treat an illness. After a rocky takeoff and before anyone can get their overpriced peanuts, the entire plane is taken over by a group of multi-cultural terrorists, led by the stone-cold Berg. (Dominic Purcell of “Prison Break” and “DC’s Legends of Tomorrow” fame) As if that wasn’t bad enough, Nadja’s illness becomes worse and a dark secret is revealed – She’s a vampire! And one that’s extremely thirsty for that good ol’ plasma! Now as the crisis becomes deadlier by the minute, the reluctant momma-vamp must repel the insatiable thirst to keep from descending fully into her animalistic instincts, while trying to save her son and the passengers from the hijackers before they complete their heinous mission. What’s a bloodsucker to do? 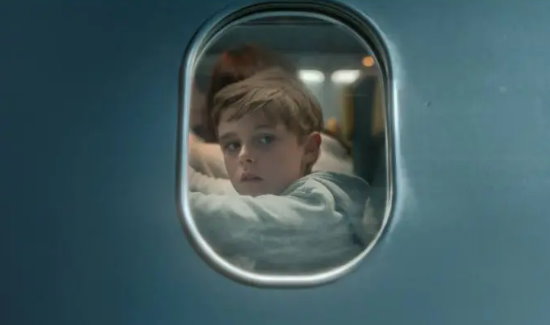 Director Peter Thorwarth lends a certain dynamic flair to this amalgamation of avianic and supernatural thriller, plucking the best aspects of the genre and sub-genre, blending them quite exceptionally. In an era where placing an unconventional or conventional threat ON A PLANE (Snakes, Sharks, Zombies, etc) would bring about campy, exploitative tendencies, Thorwarth manages to keep the plot from ever grazing or planting itself in that zany, peculiar territory and ops to metaphorically keep the tone as grounded as possible. If anything, it shares a commonality with the frantic, gruesome greatness of Train to Busan (2016). This has a long layover before reaching that modern classic status though, but it’s certainly a one-way flight in that direction.

When it comes to the apparent vampirism, this story keeps the lore and design cemented in non-stylish, non-sexy, and non-sparkly territory. None of that in sight as this creature of the night is portrayed the way it should be; Ravenous and ferociously intimidating. I commend this flick for not shying away from all it entails, even high above the clouds. In keeping with another theme of the year – love and family being the most powerful thing in the goddamn universe, what’s infused in every part of this premise is the unbreakable bond between a Mother and Son. The maternal connection added a substantial amount of depth to the film. Without it, this wouldn’t have reached a level of significance beyond the bloodletting. 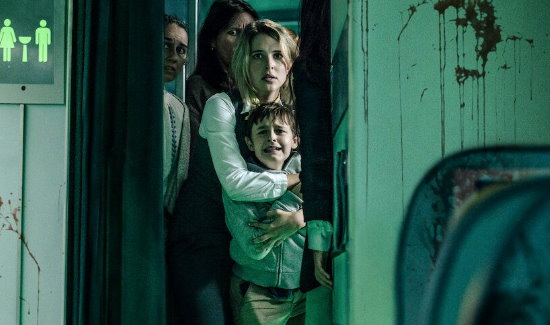 Thanks to the well-versed, genuine performances of Baumeister and Koch, they embodied Nadja and Elias’ relationship in a way that makes this situation even more dire than what’s on the curdling surface. While this horrific scenario was equal parts emotional and terrifying, their determination to remain steadfast in their survival was such a driving force throughout the film, the carnage almost takes a backseat. Almost. Thankfully this element compliments the rest swimmingly and helps keep the investment throughout its two hour runtime. Plus it’s always a treat to see Dominic Purcell in any capacity as the man can do near-mute intensity in his sleep, whether he’s an escaped convict, a pyromanic turned time traveling superhero, or in this case, a ruthless terrorist.

Overall, this blood-soaked yarn was a definitive treat with a sadistic bite, graphic visuals, surprising scope, and emotional reverence, with a grim, semi-unpredictable personality that’s tough to deny and difficult not to sink your teeth into. Of the massive crop of Netflix content coming out this year, this entry doesn’t get lost in the crowd or the shuffle, standing out a bit from the rest, and is sure to satisfy horrorhounds and present something relevant for casual watchers looking for viciousness with a bit of sentiment and depth. Above all else, it’s a worthwhile watch that provides ample in-flight entertainment and a smooth landing…turbulence notwithstanding.