Hey, everyone! Welcome to my 93rd edition of my Bad Movie Tweet-A-Thon series. As you already know back earlier this month on SuperMarcey.com, I posted up poll with three bad movies and I said that whichever one out of those three films had the highest votes, I would watch and live-tweet for this column. Well, the votes are in and you all have spoken. For this 93rd instalment of Bad Movie Tweet-A-Thon, you guys wanted me to watch and live-tweet… NORTH! Was this the film that ruined Rob Reiner’s reputation as a filmmaker? Why did legendary film critic Roger Ebert and I quote, “Hate, hate, HATED this movie!”? Read on and find out! Enjoy!

I know I’ve said this a billion times before but I’m going to say it again… Is it too late for me to *not* watch this film? #North

Now I’m not going to say this was the film that pretty much ruined Rob Reiner’s career as a director and started his decline in quality… Who am I kidding. It definitely was this film. #North

Yeah… The film has just started and I’m already having a bad feeling that this is going to be a very schmaltzy experience based on this opening scene. #North

Seriously, based on the credits, how can so many great and talented be involved with a film like this? #North

Now I don’t want to make any assumptions but based on all the items around this room that the film is focusing on, I have a feeling these are foreshadowing all the places that North is going to go in the film. #North

North’s parents are played by Jason Alexander & Julia Louis-Dreyfus. I like to imagine that this is sequel to SEINFELD where George & Elaine shacked up, moved to the suburbs and started a family. #North

Ummm… What the hell is up with Bruce Willis’ narration? His line readings are bizarre. #North

North is prodigy is admire by everyone but his parents don’t pay attention. Relatable? …. Maybe… I don’t know. #North

“Why don’t they like me? What did I do wrong?” Also Rob Reiner after reading the reviews for this film. #North 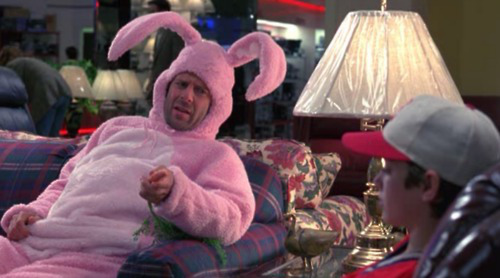 Bruce Willis has shown up and he’s wearing giant pink Easter Bunny costume. Somehow considering how he’s career going these days, this is the least embarrassing thing he has done. #North

Oh… Hello, Rita Wilson. Thanks for randomly popping up in the film for no reason. #North

Yeah, this film doesn’t reflect real life at all. If all the parents in town told their kids to be like North, the kids would definitely *hate* him, not *love* him. #North

I like how North’s friend Winchell is wearing a suit in school. #North

Ahhh… What the hell type of pants factory is North’s Dad working at?! #North

Ahh, ‘90s family films. Where the kids in them behaved more like adults then actually kids. #North

I don’t know about anyone else but casting Jon Lovitz as an ambulance chasing lawyer is perfect casting if I say so myself. #North

North’s parents just discovered that he wants to divorce them through the school newspaper. I would say that this is unrealistic but it seems pretty accurate with the media these days. #North 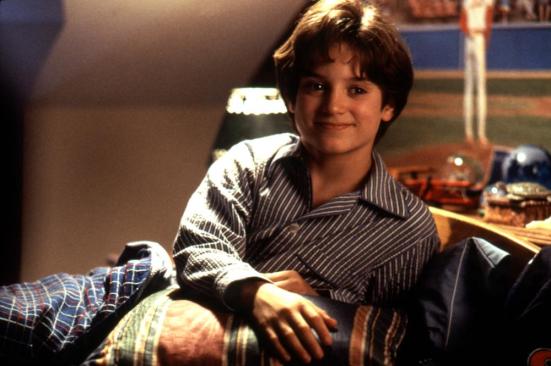 Ummm… Why is the media so obsessed with North’s story? It must be a so news week. #North

Oh, hai Alan Arkin as the Judge of North and his parents’ trial. #North

Funny how the Judge mentioned the Little Rascals when the movie version of that show came out the same year as this film… AND IT WAS BETTER THAN THIS FILM TOO. #North

Well… Old times telephone switchboards were still around in the ‘90s. Who would have thought. #North

North has got his first tonne of letters of potential parents who want to adopt him. First up… Texas! #North

North’s first batch of potential parents are… Dan Aykroyd & Reba McEntire… And they are the most stereotypical Texas couple of all time. #North

Damn! Those BBQ ribs are huge! I want some… #North

Wow… Okay… This film has turned into a musical… this is jarring. #North

So… Bruce Willis plays the ranch hand for this Texas family and he’s not the same guy we saw in the bunny suit earlier… I’m not sure why, but okay. #North

Even though I know very little about Texas, but I’m pretty sure that nobody there dresses up like Dan Aykroyd & Reba McEntire do in the film. #North

Did Governor Ho just say that his wife was barren? That’s a very personal this to say out loud to a kid. #North

I’ve never been to Hawaii myself, but I’m assuming everything that I’m seeing so far is also a stereotype of that place. #North 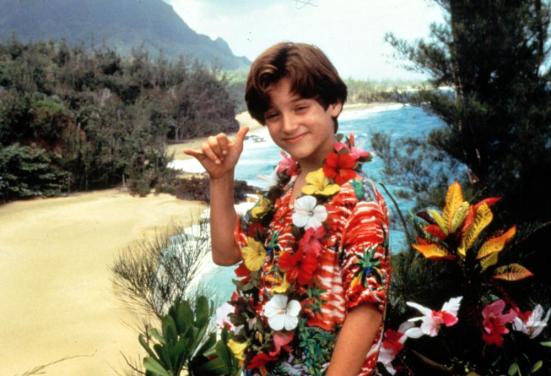 “My crack is going to be shown in every airport?!” Wait… What? #North

Yeah… the word “crack” is being said way too much in this scene. #North

Bruce is back and he’s playing another character. This is going to be a running thing, isn’t it? #North

Well, Hawaii is done. Now North is off to Alaska… Oh, boy… This section… #North

I don’t know why Winchell & North’s lawyer are in a massage parlour. This is unsettling. #North

Yeah, I’m pretty sure that airports would shovel the snow away off the runway before any plans can land. #North

Oh, dear God! Graham Greene and, worst, Kathy Bates are playing the Inuit couple and neither of them are a Inuit person… This… is… bbbbaaaadddd… #North

Oh, geez. Abe Vigoda is a playing Inuit person too… Who ever came up for the casting decisions in the section of the film should have been fired. #North

Holy shit… Is that Richard Belzer from LAW & ORDER is part of the Alaskan Inuit community too?! #North

So… After the news that he was divorcing them, North’s parent literally froze stiff from faint and now they’re being displayed in a museum? This is film is weird. #North 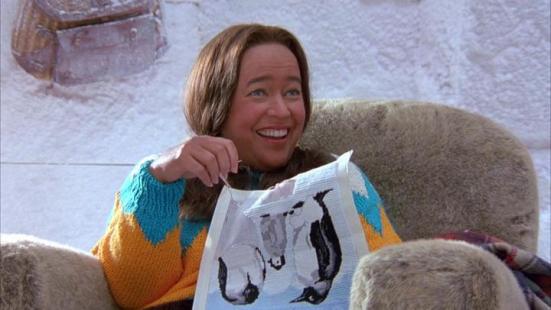 So now North is off to his next family and they’re Amish people… just when I though this film couldn’t get weirder. #North

So North meets the Amish family for one minute and flies away very quickly. How rude. #North 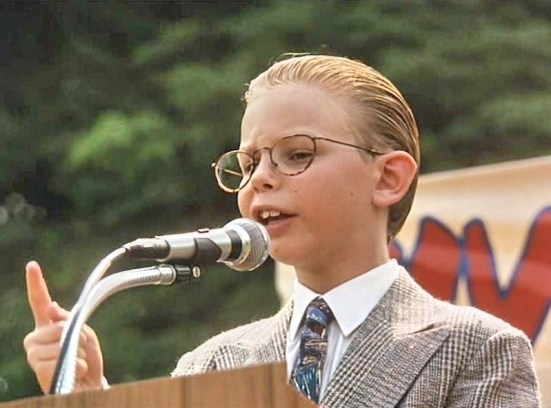 So after that North makes stop overs to China, Paris and Zaire. Thank goodness these scenes are very short so we don’t get more cultural stereotypes. #North

Okay, I stand corrected. The film manages to milk some more stereotypes from these quick scenes. #North

North has made it to his next and final family, who just happened a normal non-cartoonish and non-stereotypical family… Hmmm… #North

Of course the dad is the late great John Ritter. Makes sense. #North

North’s parents finally woke up. Now they’re being taken away and being replaced by exact lookalikes… Okay… #North

Well, this is first North’s parents are actually acting like parents for once. #North

I don’t know Winchell is becoming as evil as he is. Doesn’t make any sense.

I don’t know why North’s latest parents are dressed up like they are from the 1950s. It’s weird. #North

So… Winchell sliced to different interviews of North’s parents to make North think that they don’t want him? That little shit. #North

Now North has decided to disappear to New York and he’s just walked pass a bunch of prostitutes… This is meant to be a kid’s film, right?! #North

Wait, hold the phone! Winchell is playing on killing North?! WHAT THE HELL IS HAPPENING RIGHT NOW?! #North

Holy shit! Winchell’s henchman is firing a gun at North! I’m not joking about this!!! #North

HOLY SHIT! That goon is still trying to shoot, North! AGAIN, HOW IS THIS A KID’S FILM?! #North

Oh, hi again, Bruce… It’s been a while since you’ve played another random character in this film. #North

So… Now that North has decided to go back to his real parents, that’s when the kids turn against him. #North

Wait, Bruce Willis is now playing a postman?! Just minutes after another character he played dropped North of at the airport? This film is just continues to not make sense. #North

Yeah, I’m convinced that when Winchell grows up, he would be a Trumper. #North

Oh, no. Will North get to his parents in time before the clock strikes 12pm and he has to go into an orphanage? I don’t know. I don’t care. #North

Wait… WHAT?!!! Everything that happened throughout this film was just a dream?! A DREAM?! #North

Bruce is back and he’s playing the Easter Bunny guy again. This time out of costume. I wonder if shot all his scenes for this film in one day like he does with his recent films lately? #North

Ahhh… isn’t that sweet. North and his parents are reunited and their back as a family again… Whatever. #North

Well, that’s the end of NORTH. Did I hate this film as much as Roger Ebert did? No, no I didn’t. That being said though, it’s definitely not a good film at all. It’s both confusing and misguided. Plus there’s no denying that hit Rob Reiner’s directing in a big way too. #North

I hope you all enjoyed reading this 93rd edition of my Bad Movie Tweet-A-Thon! Keep a look out in a few weeks for my 94th edition, which I could be doing on one of the following three bad films: COOL WORLD, KANGEROO JACK and LITTLE ITALY. Which one will it be? Vote on the poll which will be posted on SuperMarcey.com soon!