Your regular co-hosts Super Marcey and the Terrible Australian Bede are back, and we’re not alone for this episode as we are joined by returning special guest Tamika Jones from DailyDead.com, who is no stranger to The King Zone! This episode sees us discussing the TV Mini Series The Langoliers (1995) and the film The Mangler (1995), two adaptations that are a bit more under the radar than some others, and we do have some strong opinions on! Please excuse some of the audio quality ect as we had a few issues due to weather.

The Langoliers (1995) is a TV Mini Series directed by Tom Holland, based upon Stephen King’s novella of the same name from Four Past Midnight, and it stars David Morse, Kate Maberly, Bronson Pinchot, Patricia Wettig, Mark Lindsay Chapman, Frankie Faison, Dean Stockwell and David Forrester. The Langolier‘s tells the story of passengers who wake up on an empty plane mid flight, with no memory of what happened to the others.

The Mangler (1995) is a horror/mystery film, directed by Tobe Hooper, based on King’s short story of the same name from 1972, and it stars Robert Englund, Vanessa Pike, Ted Levine and Daniel Matmore. The film focuses on a Detective who investigates an accident at a laundry, discovering the terrible truth behind the folding machine. 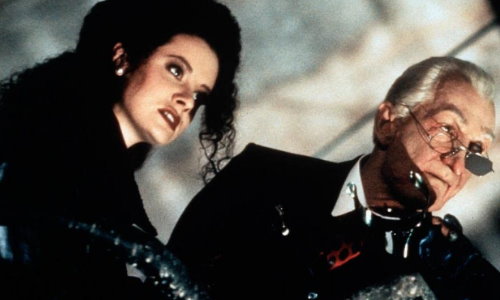 * Bede and Marcey welcome back Tamika!

* Want to hear some rants? We got you covered!

* Just what exactly was Bronson Pinchot doing in The Langoliers?

* An evil laundry machine … but really?

* Are these lower tier King?

* Marcey is obsessed with Ted Levine for some reason.