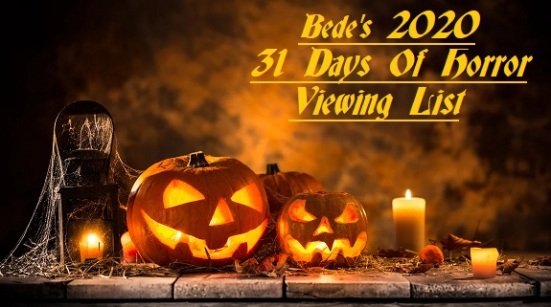 Yep, its almost that time of the year once again everyone! Now that October in finally upon us, that means only one thing…It’s the Halloween season! Even it’s pretty much a given that 2020 so far has been feeling like we have actually been living a horror film every day of it but for me personally, that’s not going to stop me from enjoying one of my favourite times of the year as a huge horror fan. Plus we are currently both restrictions and lockdowns in the city due to COVID-19, it gives more of a reason to stay home and watch horror films for the entire month of October. Still regardless, I would have done done that anyway even if we weren’t the mist of a pandemic. Now if you have been following me over the pass few years, you would already that I always do something a little different when I put my 31 Days Of Horror list together in comparison to everyone else’s lists. However for those out there who don’t, I’ll explain. While most horror fans usually watch at least one film per day for their 31 Days Of Horror viewing lists, I up the ante by doubling the amount of films I’ll be watching by raising it to 62 instead. Yep, you’ve read that correctly: 62 horror films. Which means I’ll be checking out two horror films every day during the month of October. Having done this theme at least seven times now in the pass 8 years, I always get a kick out of it since it gives me more opportunities to check out a lot more horror films, both old and new, that I still hadn’t got around to watching yet. However when it comes to mine, I do have some rules that I follow in regards to which 62 horror films I put on my 31 Days Of Horror viewing list:

1: All the horror films have to be ones that I have never seen before.

3: Sequels are not allowed to be included, only stand alone films instead.

Those are the three rules that I go by when it comes to my list. What I do like about my curated list for this year’s one is that it’s a good mixture of many different types of horror films: vampires, zombies, giallo, supernatural, Hammer Horror, foreign horror, possession, slashers, surreal, psychological, horror comedies, Vincent Price films, anthologies, monsters, sci-fi horror, serial killers, cults, silent horror films and so much more. However I will make some exceptions when it comes to certain days though. Other than the 62 horror films that I picked, I’ll also be adding a couple of bonus films on certain days that’ll be original horror film that’ll be making their official premieres on streaming services like Netflix, Prime Video and Shudder (since cinemas are shut down where I live for a little while, this will have to make due instead). Now the question remains: will I be able to watch them all? It’s never easy but it’s a challenge I’m willing to accept. So without further ado, here’s my complete final viewing list of every horror film I’ll be seeing in October…

Day 1: TRILOGY OF TERROR and SCARE PACKAGE
Day 2: BRAIN DAMAGE and EXTRA ORDINARY (Bonus Film: VAMPIRES VS. THE BRONX)
Day 3: THE REINCARNATION OF PETER PROUD and WOUNDS (Bonus Film: SCARE ME)
Day 4: HUMANOIDS FROM THE DEEP and SEA FEVER (Bonus Film: THE BINDING)
Day 5: THE MCPHERSON TAPE and ANTRUM: THE DEADLIEST FILM EVER MADE
Day 6: ATTACK OF THE KILLER TOMATOES and THE HUNT
Day 7: SANTA SANGRE and ST. AGATHA
Day 8: THE FINAL TERROR and THE RANGER
Day 9: DAY OF THE ANIMALS and BODY AT BRIGHTON ROCK
Day 10: CHILDREN SHOULDN’T PLAY WITH DEAD THINGS and YUMMY
Day 11: THE HAPPINESS OF THE KATAKURIS and TAG (Bonus Film: HUBIE HALLOWEEN)
Day 12: GOTHIC and MALEVOLENT
Day 13: THE RETURN OF THE VAMPIRE and BIT
Day 14: KILL, BABY… KILL and TERRIFIED (Bonus Films: BLACK BOX and THE LIE)
Day 15: THE GOLEM: HOW HE CAME INTO THE WORLD and GRETEL & HANSEL
Day 16: BABY BLOOD and LUZ
Day 17: THE DEVIL’S RAIN and SATANIC PANIC (Bonus Film: THE CLEANSING HOUR)
Day 18: 13 GHOSTS (1960) and POLAROID
Day 19: INTRUDER and THE FURIES
Day 20: TETSUO: THE IRON MAN and ELIZABETH HARVEST
Day 21: CASTLE FREAK and THE HEAD HUNTER (Bonus Films: EVIL EYE and NOCTURNE)
Day 22: THE LEOPARD MAN and BLOODLINE
Day 23: VIY and THE WRETCHED (Bonus Film: CADAVER)
Day 24: THEATER OF BLOOD and HARPOON
Day 25: A LIZARD IN A WOMAN’S SKIN and I SEE YOU (Bonus Film: 32 MALASANA STREET)
Day 26: THE ADDICTION and THE SHED
Day 27: MYSTERY OF THE WAX MUSEUM and YOU SHOULD HAVE LEFT
Day 28: THE CURSE OF FRANKENSTEIN and DEPRAVED (Bonus Film: NOBODY SLEEPS IN THE WOODS TONIGHT)
Day 29: WHO CAN KILL A CHILD? and ELI (Bonus Film: MAY THE DEVIL TAKE YOU TOO)
Day 30: THE LIVING DEAD AT THE MANCHESTER MORGUE and BLOOD QUANTUM (Bonus Film: THE DAY OF THE LORD and HIS HOUSE)
Day 31: I WAS A TEENAGE WEREWOLF and TRICK

Well, there you have it. These are the films I’ll be seeing this year for Halloween. Keep a look out for my daily thoughts/mini-reviews for all of these films every day during October at www.twitter.com/BedeJermyn or on the Super Network Facebook page.