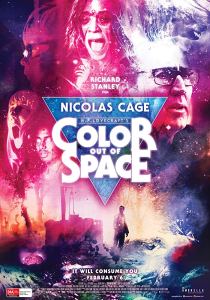 Even though his work hasn’t been adapted to the big screen as much as other sci-fi/horror authors like Stephen King or H.G. Wells, there’s no doubt that the prolific if controversial H.P. Lovecraft is still one of the most influential writers of all time. His work has been the inspiration for people such as John Carpenter, Guillermo del Toro, Stuart Gordon (who himself as adapted quite a number of Lovecraft’s stories into films. The most notable of which being the classic 1985 horror/comedy RE-ANIMATOR), Neil Gaiman and many more. However one person in particular who is a huge fan of Lovecraft’s is Richard Stanley, the director behind the ’90s horror films HARDWARE and DUST DEVIL. After a long 27 year break from making feature films, Richard Stanley has decided for his long-awaited return to the big screen by adapting H.P. Lovecraft’s famous short story COLOR OUT OF SPACE into a film starring Oscar-winning actor Nicolas Cage. The following review of the film is in an audio format. Enjoy!

Synopsis: After a meteorite lands in the front yard of their farm, Nathan Gardner (Nicolas Cage) and his family find themselves battling a mutant extraterrestrial organism as it infects their minds and bodies, transforming their quiet rural life into a technicolor nightmare.