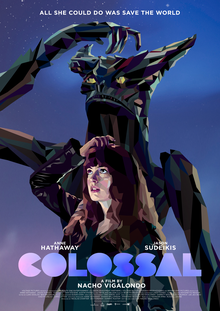 Here’s a question: what do films like TOY STORY, SPEED, SNAKES ON A PLANE and PHONE BOOTH all have in common? They are all high concept films. When you hear the premises for each of these films, they instantly grab your attention right away due to how original and interesting their plot sounds. Which is something that you don’t hear much of these days. One of the biggest criticisms that Hollywood studios have been getting lately is that there isn’t enough originality in films anymore. When you think about it, it’s not hard to understand why. Some of the biggest films that are being released from Hollywood these days are films that are either sequels, prequels, remakes or reboots. So when an original film with a unique high concept premise comes along, it stands out more in the crowd. One film that fits in that category is the indie sci-fi comedy COLOSSAL. So what’s this film about? Read on and find out!

The film tells the story of Gloria (Anne Hathaway), an out-of-work New York writer who loves to go out to drink and party with her friends all night. However things change one day when Gloria’s boyfriend Tim (Dan Stevens) breaks with her because he has had enough of her constant drinking. After Tim kicks her out of their apartment, Gloria decides to move back to her home town and tries to make a new start. Along the way she reunites with her childhood friend Oscar (Jason Sudeikis), who gives her job as a waitress at his bar. After a night of drinking with Oscar and his friends, Gloria wakes up the next morning to find out that a giant monster is attacking the city of Seoul, South Korea. However when Gloria starts to notice some weird but familiar things about the monster, she realises that she may have a some kind of psychic connection to it.

Okay, I know what you are thinking. Based on its synopsis, COLOSSAL sounds like something whose high concept premise could easily could have been used as the basis for either a short film and a comedy sketch. Admittedly I thought the same as well and I wondered how the film’s writer & director Nacho Vigalondo (the filmmaker behind the similarly themed high concept films TIMECRIMES, EXTRATERRESTRIAL and OPEN WINDOWS) would sustain an interesting if rather one joke idea like this for an entire feature-length film. Don’t get wrong the premise definitely has a lot of potential but at the same time, it could easily not work at all. So how did the overall film turn out? Well, I can tell you that not only writer/director Nacho Vigalondo completely delivered on the promise of its high concept plot, he also managed to inject it with some truly compelling layers that elevated the film to something greater than it had any right to be. No joke the synopsis I wrote above only just scratches the surface of what this film is really about since it tackles some interesting and thought-provoking themes, which I thought gave the story some real serious weight to it. I won’t say what they are since I would have to go into spoiler territory to explain them but I will say this, the themes that this films explores are very relevant and topical to what is happening in our world today on a social level. It’s these aspects in Vigalondo’s screenplay that I thought really worked and he did a truly terrific job exploring them in a way that I found really clever.

As director Vigalondo also does excellent work at juggling the film’s shifting tones of comedy, drama, sci-fi and giant monster movie without it ever feeling too uneven. In another filmmaker’s hands the film probably wouldn’t have worked as well but Vigalondo handles it superbly with his direction here. Plus he never forgets what type of film he is making as well as the giant monster scenes set in Seoul were a lot of fun. I can see how some viewers could be put off by how stark of a contrast these sequences are when compared to the rest of the film (which almost felt like a mumblecore style indie film) but if anything else, that’s what made the film really fun for me. Now when it comes to the film’s performances, Vigalondo was able to get some truly great work out of his cast. There’s no doubt in my mind that this film belongs to Anne Hathaway, who I thought exceptional in the role of “Gloria”. While there are definitely some shades of her Oscar nominated turn from RACHEL GETTING MARRIED in the character, Hathaway brings a lot of layers to “Gloria” that make her very different so that it doesn’t feel like a total rehash of tha role. Despite her character being a troubled alcoholic, Hathaway makes us sympathise with “Gloria” and she was able to gets us to emotionally be invested her journey as she comes to terms with the gravity of her rather weird situation. Especially as she deals with the repercussions of the destruction that she unknowingly caused when she became the giant monster.

While it definitely is without a doubt Hathaway’s show through and through, she isn’t the only one among the cast who delivered a great performance. The biggest one that surprised me the most was Jason Sudeikis’ turn as “Oscar”. I honestly thought that his character was basically going to be a standard love interest type of role and while that is true to a some degree, there is actually a lot more going on to “Oscar” that made him far more compelling character than I originally thought. This role definitely gives Sudeikis some really meaty material to work with as an actor and you can tell that he is relishes playing someone as surprisingly complex as “Oscar”. It’s without a doubt his best performance yet and I think everyone is going to look at Sudeikis in a different since this film shows us sides of him as an actor that we’ve haven’t seen before. Plus while the supporting cast (Dan Stevens, Austin Stowell and Tim Blake Nelson) may not have as interesting of roles as both Hathaway and Sudeikis do in this film, they all still deliver really fine work nonetheless with their performances. Also the CGI effects for the budget that this film had (which was $15 million) were actually pretty impressive, the creature designs were really well done and the score by Bear McCreary is a great call back to the classic giant monster movie score of yesteryear like GODZILLA etc. In terms of negatives, I don’t really have that many to be honest. The only few flaws that I can think of is that while alcoholism plays a big part of the film, it’s not really the most 100% accurate portrayal of it. When compared to other films that have used it as it’s subject, COLOSSAL does seem slightly tame in how it portrays it and as well as its negative/destructive power. Also the script can be a little unsubtle to what it is trying to say with certain themes in the story and I wish the origin of the monster did seem a tad silly.

Overall despite some minor aspects that I thought were a little flawed, COLOSSAL is still an absolutely fantastic and truly original sci-fi comedy/giant monster film that’s definitely up there as one of the best films that I’ve seen so far in 2017. Sure it won’t be for everyone due to both its really bizarre plot and mash-up of different genres but for me personally, that’s what makes it such really great and unique film. It’s equal parts hilarious, compelling, moving, smart and fun. If you approach it on its wave length, I think you’ll really enjoy it as well. But if your one of those people who dig films that have really quirky and original high concept plots, you’ll definitely get a kick out of this for sure.