The ‘go home’ episode of RAW as they head towards CLASH OF CHAMPIONS, the first solo RAW PPV since the draft. Did they managed to hype things up? Let us find out …

Roman Reigns, Mick Foley and Stephanie In The Ring 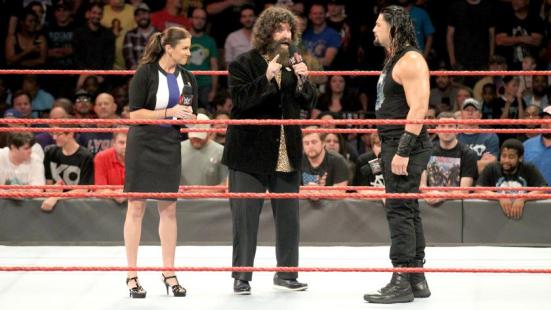 The show opens with Roman Reigns ready to address the situation with Rusev and his loss last week. Stephanie McMahon and Mick Foley come out to talk business. So Roman Reigns gets a US Title shot against Rusev at the PPV, and Rusev will battle Seth Rollins on RAW as punishment for both of them interfering in the main event last week. Foley then announced the Main Event for RAW would be a rematch between Kevin Owens and Reigns, no title on the line in a Steel Cage. Kevin Owens came out to state his displeasure, and Seth Rollins made his way out for his match, happy about the Steel Cage Match. Not a bad opening, it establishes the storylines and hints at things to come.

This was quite an intense and hard hitting match, I liked what both men brought to the table. Rusev looked like a beast but Rollins looked strong as well, it was a match where you could see things go either way and neither man would lose any credibility. The match spilled outside the ring and both men didn’t seem to care, it was all about hurting the other with no thought to their own well being. Rusev was definitely playing the heel and Rollins was heading towards the face role. After a dive to the outside on Rusev, both men fought up the ramp and the match ended in a double count out.

But that wasn’t the end of things between these two, they fought to the stage and Seth Rollins decided to be crazy and he dove off the stage onto Rusev. A great sight to see, and I do love seeing more the ninja Seth Rollins that we got a lot of in The Shield. I liked this match a lot, and I wouldn’t complain if they feuded down the line actually. The double count out made sense too for this match, no complains on that finish. 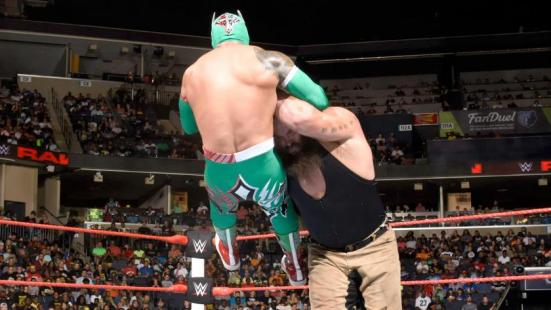 Not much of a match honestly, Braun was all power and Sin Cara was no match despite his best efforts. I appreciate that he’s fighting someone on the roster, but enough with the smaller guys. Have him go up against Mark Henry or something, show his power with someone a lot bigger. This isn’t doing much for me, but I do like Braun and he has a lot of potential. Sin Cara … yeah who knows where he’s headed now.

Before this match Mick Foley announced that the title match at CLASH OF CHAMPIONS would be a Triple Threat with Sasha and Bayley. As pointed out last week Sasha had her shoulders down as well, Foley credited Dana with the idea, infuriating Charlotte even more. Pretty decent tag match with good back and forth action from everyone, Dana continues to get better and doesn’t look as awkward anymore. Interesting that there were tensions between both teams, with Sasha clearly not too happy with Bayley being added to the title match. I liked that the heels worked on Sasha with her taped up body, and that she needed to tag in Bayley. Good ending with it looking like Bayley was going to hit her finisher but Dana made the save and Charlotte got the pin. Will the title change hands? This one doesn’t seem to clear cut to me.

Third week in a row we get Bo Dallas go up against a ‘jobber’, I didn’t quite hear the commentators but Gary Graham is related to Michael PS Hayes. I like the new attitude from Bo, and the aggression he is showing. These wins while against a ‘jobber’ serve a purpose and there is meaning behind it. I like his promos and where this leads is anyone’s guess, but I am all for it. About time he got something, because he is a talented guy who definitely gets on board with his characters 100%.

Another pretty fun and decent match from these two, of course I expected a Cesaro win so we get the tie breaker and winner decided at the PPV. Good action as always and they definitely have been trying to make each match different from what has come before. It certainly can’t be easy, but they have made it work and it’s been a fun ride. Curious to see what happens after the series ends, how they will be booked. I really liked the on going story they have told with each match, Sheamus tries to get a win by using the ropes but the ref sees it and doesn’t make the count. The match continues for Cesaro to pick up the win, looking forward to match 7.

Talk about a thrown together match, through the episode Jericho has been complaining about Mick Foley and making a list about him. He came out to talk about it, then Enzo and Cass showed up and that was fun. The Shining stars showed up, then The New Day, then The Club and then Sami Zayn came out to go after Jericho and a fight broke out. So a match was made …

I really struggled to care about this one, honestly I did. No reason for this match, like at all. They just put them together randomly because of shit we haven’t build up the feuds much and or we have no idea what we are doing. That was it … I mean they all tried their best but I just didn’t care all that much. I can’t even remember who pinned who, or how it ended. I know the face team won and that was it.

Mick Foley for some reason really struggled introducing the Cruiserweights, not sure what it was though. This was pretty much what I was waiting for all episode, he introduced the four guys one at a time. We did not get to see the Cruiserweight Title or the champion, and I do believe Noam Dar is also signed but he wasn’t there either. Foley announced that they would have a Fatal Four Way match and the winner would face TJ Perkins with the new title on the line at the PPV.

The match was great, lots of fun and good action. Everyone delivered the goods and made the division a must see, it’ll be exciting to see it grow each and every week with new names no doubt getting added as time goes on. Gran Matalik is such a fun guy to watch, I am so glad he made it so far in the tournament and now he’s on Raw. That said Rich Swann and Cedric Alexander are so much fun, they gel so well together too. Brian Kendrick has always been great and I have been a fan of his for such a long time. He didn’t feel involved in the match as much as the other three, but he did get the win. I can understand the reasoning and I don’t doubt he will put on a clinic with TJ Perkins. 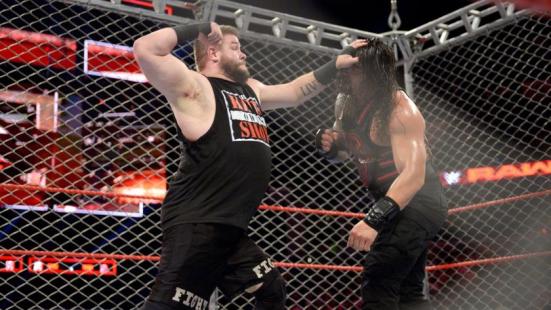 This match was alright, nothing special and Reigns just didn’t really deliver. I felt that Owens was really carrying the match and Reigns just sort of seemed lost. It is a shame because the Steel Cage gimmick is a lot of fun and makes the match feel very important. We had some close calls with the Superman Punch and a kick out, then a Pop Up Powerbomb and kick out. Both men then decided to try and escape the cage, with Reigns climbing over before Owens could get out from the door. Rusev then showed up, and Reigns got put back in the Cage and locked in with Rusev and Owens. Rusev put in the Accolade and I liked Owens telling Rusev to MACHKA! 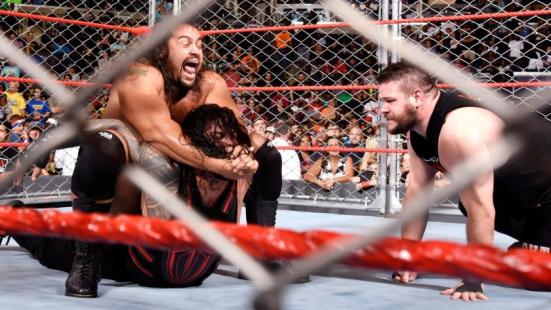 The big surprise though was Seth Rollins coming in to make the save, his music hit and he ran down. He climbed the cage and stopped both Rusev and Owens from getting him, then he dove off the cage taking them out. The show went off the air with that ending, so I think it is safe to say Rollins is going to be a face. And this team up against Reigns was there to try and get the fans on his side but it wasn’t entirely working.

Overall this episode just felt like another RAW, it did not feel like the go home show for a PPV. I am sure the show itself will probably be decent but this wasn’t a great build up. 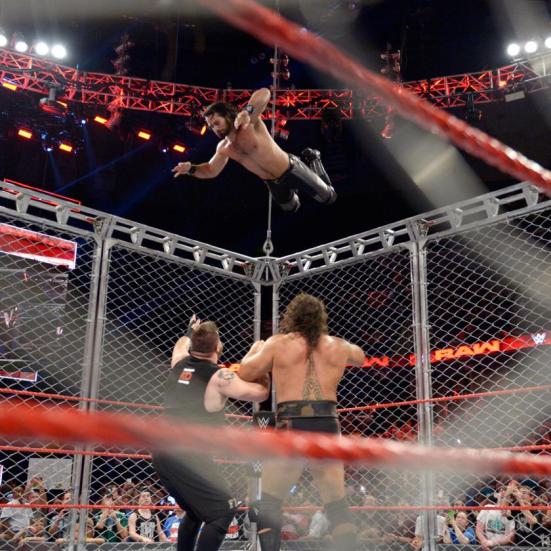