Here we go the first episode of Smackdown Live after the draft, have they managed to keep the momentum going? Is Smackdown going to be the show not to miss?

Shane McMahon and Daniel Bryan are here and we are kicking off the show with the roster all at ring side. So what do they have in store for us? Shane announces that on September 11th we will see the very first Smackdown only PPV, something we knew would be coming. Well Dean Ambrose needs a Summerslam opponent, they bring the Champion out and then announce that on the show there will be a Six Pack Challenge to determine the number one contender. They announce five participants with John Cena, Bray Wyatt, Dolph Ziggler, Baron Corbin and AJ Styles. The sixth entrant will be determined by a Battle Royal – up next. A nice opening to get us all pumped up. The set doesn’t look overly exciting, and the announcers are at ringside, so there are things that make the brands feel separate. 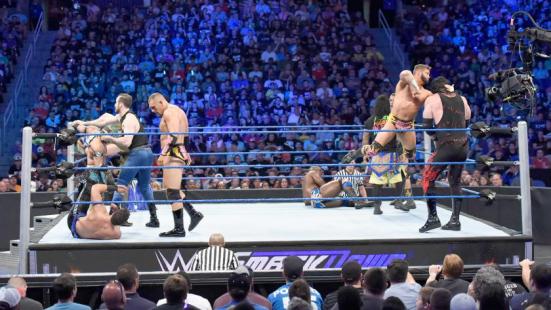 First off the bat I noticed that JBL is talking over Mauro, that should be a crime. Mauro and David have great chemistry together, JBL just seems tacked on. To the match itself it was a standard battle royal and it took a little bit to get going. Simon Gotch is eliminated first, maybe punishment for the Sin Cara incident? Looking at who is in the match the most sense to win would be Alberto Del Rio, although I could see an upset with someone like Apollo Crews winning. Slowly but surely people get eliminated and the camera work for the match is awful, not steady or flowing at all. Ultimately it comes down to Kane, Zack Ryder, Kalisto and Apollo Crews. They team up against Kane, makes sense he is the biggest guy. Crowd is clearly behind Zack Ryder, Woo Woo Woo! Unfortunately Ryder slipped on the top rope and messed up that momentum. Kane eliminates Kalisto, he gets hit by the Broski boot though, which gets him eliminated. Down to Kane and Apollo, and as I said the upset happened with Apollo Crews.

Promo promoting the return of Shelton Benjamin, the rumors were indeed true! Excited to see him coming back and a part of Smackdown, should be interesting.

Pre-taped promo with Dolph Ziggler, looks like he is a renewed man, as it should be. Time for him to get used properly.

Off the bat the crowd are chanting for Becky and ‘Lets Go Becky’, she is extremely well loved and over. Nattie continues the new character traits and I am enjoying it. Becky mocking Nattie was pretty good, the rivalry has been working really well and their chemistry is fantastic. Lots of great and fast paced back and forth action, with Becky getting herself really fired up. Nattie puts a stop to that as there is a commercial break. A great top rope leg drop from Becky Lynch, as she manages to scout Nattie. More great back and forth follows as they both try to stop each other. Some cool moves with Becky trying to hit her submission and Nattie wriggling out of it. A very hard hitting Nattie-By-Nature gets hit, kick out though, Becky does get the Disarmer on and makes Nattie tap. A fantastic follow up match, one possibly one of the better women’s matches we have seen on Smackdown this year.

Post match Becky says “Just call me Becky Balboa”, after that is said Alexa Bliss comes out to introduce herself. Naomi’s music then hits and Feel The Glow is back. Carmella makes her way out after that, Tuesday nights are about to get Fabulous. Huge boos as Eva Marie decides to come out … *yawn*. Well there is our Women’s Division for Smackdown, and then that is it? Okay … no announcement of a Title belt for them?

After the commercial a pre-taped Baron Corbin promo, not too good – he needs mic work.

Miz TV with The Miz 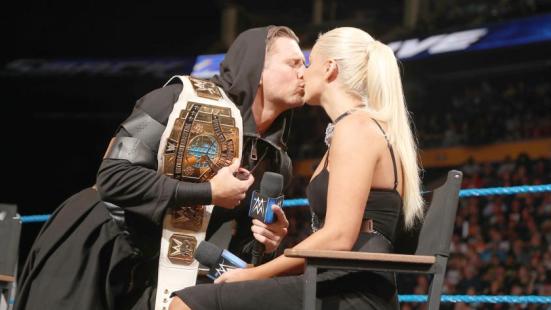 The Miz announces he is interviewing himself, Jericho did this not that long ago or did we all forget. The Miz drones on and all I care about is Maryse. Randy Orton interrupts the love fest, and this makes me happy. Orton says “Clearly you are a legend at playing with yourself” and I kind of lost it. Its great to see Orton having a lot of fun, and of course having him back. I like that he brought up the Legend Killer gimmick he used to have, and of course the build up for his match with Lesnar. Orton wants to have a match, and he challenges The Miz. The Miz doesn’t want to have one, but Maryse accepts on his behalf.

The Miz vs. Randy Orton

A short match that saw The Miz getting fairly aggressive in order to try and over come The Viper, he tried to bring it to him and take advantage of the fact Orton hadn’t been in the ring in nine months. This didn’t last long as Orton got the upper hand, and who would find Orton a credible threat if The Miz had the upper hand for too long. We saw an RKO outta nowhere, and Orton doesn’t make the cover. Instead he basks in the crowd cheering for another one and he takes his time with it. He hits a second one and gets the pin, welcome back Randy Orton.

American Alpha video package and they will make their debut next week! 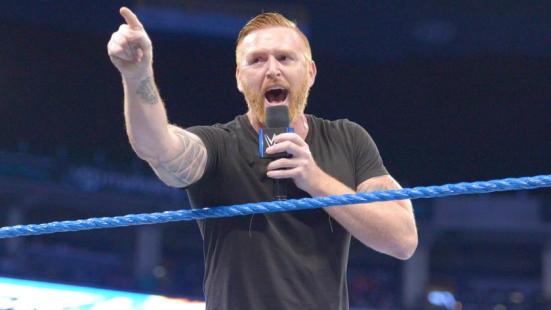 Some local guy is in the ring and Heath Slater shows up and takes him out. If you remember Heath Slater was not drafted at all. He’s angry and I like it. He manages to get a ‘Sign Heath Slater’ chant going, which brings out Shane McMahon. Shane tells him if he wants a job he should send in a resume, Heath takes offense to that one. He runs down his big accomplishments, and states he is the hottest free agent. From behind Rhyno shows up, and Heath eats a gore! Does this mean Rhyno has signed to Smackdown? Heath Slater probably did the best he has done for a long time, this storyline could work wonders for him.

AJ Styles promo about the Six Pack Challenge, my favourite of the promos so far. Of course after the break we get a classic Bray Wyatt promo, and he brought up having the whole world in his hands. 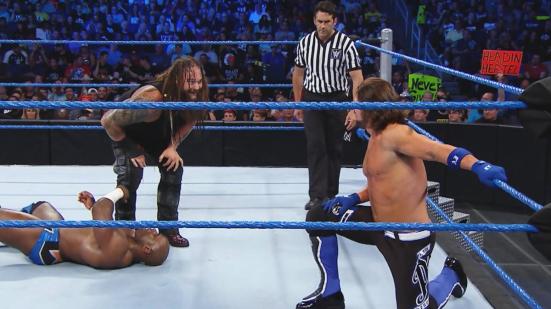 Matches like these are always crazy and this was no different, it was booked as well as could be expected. Giving each guy their moment to shine in the ring, with some big moves as well. There was a crazy double top rope suplex from both sides of the ring that really packed a punch and that was cool to see. Crews and Corbin had some good back and forth action, I honestly wouldn’t mind seeing a program between them to help improve their skills. The crowd was definitely into what they had to offer, so that was a bonus. Bray Wyatt was fantastic and I loved his weird spider walk and the reaction of Crews was great. There were a bunch of near falls and finishing moves hit. The referee even got taken out, no DQ apparently so its allowed.

The end came when Cena hit the AA on just about everything, with a near fall on AJ Styles. After Cena got taken out with the Phenomenal Forearm, Ziggler jumped in and Super Kicked Styles and got the pin fall. Yes Dolph Ziggler got the win, he is our new Number 1 Contender for the WWE Title! My pick of Bray Wyatt did not win, curious as to what they will do with him now. But Ziggler got the win, a huge win. His promo at the start of the show was important, this is a new era for Ziggler and I am on board. If anyone deserves this spot, it is him. He has busted his ass this year and a huge match at Summerslam is a pretty amazing reward.

Overall Smackdown was not on the level of Raw, but to be fair they didn’t have as much time as Raw. The seeds are certainly getting planted for what we can expect going forward. I am sure we will get Smackdown Tag Team Titles, you can’t have American Alpha without Tag Titles being involved. With the tease of what we have with the Women’s Division, I expect there will also be a title there. The show was above average, and there was a lot to live up to. We shall see if the quality picks up going forward, but I thought it was just fine. Expected maybe a little better, but again how the hell could they have followed that Raw?

So the three big matches for Summerslam will be Randy Orton vs. Brock Lesnar, Seth Rollins vs. Finn Balor for the WWE Universal Title and Dean Ambrose vs. Dolph Ziggler for the WWE Title. That is definitely some inspired booking and I for one am looking forward to it.