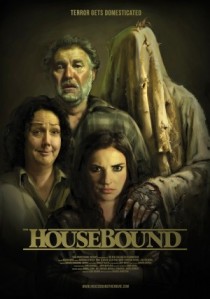 The New Zealand film industry is definitely an exciting one to keep an eye on, recently they have produced some quality cinema and in particular for the horror genre. Not afraid to blend horror and comedy, we have seen some absolute classics from the country and HOUSEBOUND is sure to get remembered fondly by those who have seen it. Marking the directorial feature debut from Gerard Johnstone, who also wrote the film, this turns the haunted house story right up on its head.

Our story begins with Kylie (Morgana O’Reilly), who helps out with a robbery that gets caught on camera. Instead of being locked up in prison for 8 months, she gets sentenced to house arrest in the home where her estranged mother Miriam (Rima Te Wiata) and step-father Graeme (Ross Harper) live. She has not been back in a long time and this punishment for her is worse than jail time, but not everything is right in the old family home. Her mother speaks about strange occurrences and believes the house is haunted, Kylie the sceptic does not believe it but before long she starts to experience some odd things. With the help of security monitor Amos (Glen-Paul Waru) they start to investigate the house and the chance of some paranormal activity.

From the get go this film proves to be anything but run of the mill, it showcases early on that it will be rather quirky and it is going to play with the usual haunted house cliques. Kylie is not what you would call a likeable character, but she is strangely relatable with her moody gloom and hatred for everything, we’ve all been there. With her house arrest she has a reason to be stuck in the home whilst odd things are happening, it is a clever little trope to keep the action contained. The addition of Amos works extremely well, the security monitor who has an interest in paranormal investigating is on the case and to get the mystery solved he seems quite fine with breaking a few rules.

There is never a dull moment in HOUSEBOUND, the scares aren’t constant but they hit when they need to and the build up towards them really works. The comedy is played very cleverly, there are serious moments that get a good laugh and the facial expressions from the actors help sell that. There are subtle clues littered throughout the build up, nice little hints for what is to come and that element really worked and was highly appreciated. It is a testament to Johnstone who knew what would work and what wouldn’t for this type of film, and at times it is almost a parody of the genre, which in recent years has been over done on the indie horror scene. There is a mystery at the center of the story, played out slowly and investigated in such a way that when all is revealed it does pack a mean punch. 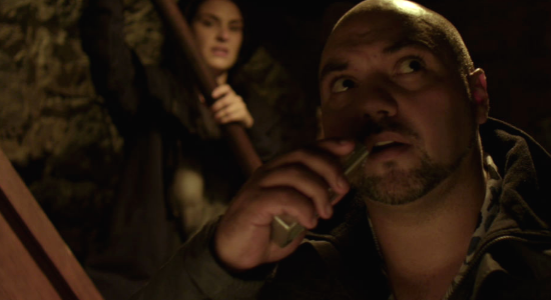 Performances here are quite impressive, Morgana O’Reilly made for an interesting lead and despite the nature of Kylie, she made her a hero by the end of the film. Her comedic timing was spot on, and the way she handled the scares was on point. The chemistry she shares with Glen-Paul Waru felt so natural and they played off each other extremely well, without that this film would not have been as enjoyable or as fun. Rima Te Wiata was quirky as Miriam and added some great comedy into the mix, the complicated relationship between mother and daughter was very well explored and both actresses certainly added layers into it. We also have a weird neighbour and a very creepy therapist Dennis (Cameron Rhodes who steals his scenes), who round out the cast and make this film an absolutely blast.

Credit needs to go to every involved for this film, it is proof that you can make a successful horror/comedy on a low budget without comprimising. This film reaches its achievements and provides its audience with scares and laughs and they never fail to hit the mark. There is nothing predictable about the story and as it unfolds and the mystery begins to unwrap the surprises keep coming. HOUSEBOUND is ultimately a great time, for fans and non fans of the genre, it has a wide appeal that does not close itself off.