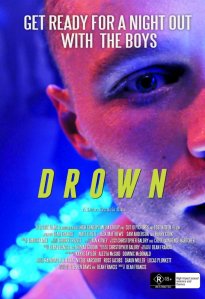 You know what type of films I admire? The ones that tackle a certain dark aspect of humanity and explore it in a thought-provoking way. Granted these type of films are definitely not the most easy-going of experiences, but I’ve got to give them credit for not holding back from delving into these subjects. One film in particular that falls into that category is the new Australian drama DROWN, which gives us unflinching look into homophobia.

Based on the play by Stephen Davis, the film tells the story of Len Smithy (Matt Levett), a champion surf lifesaver who’s considered a legend by everyone at his local surf club. Ever since he was young, Len has been brought up to act like a ‘real man’ and behave like a champion by his legendary father. One day his champion status is threatened when a new lifesaver joins the club named Phil (Jack Matthews). When Len finds out that Phil is gay, he takes an instant disliking to him. After Phil beats him to win at the Surf Lifesaving championship, Len goes into a jealousy rage and decides to take revenge on him. With the help of his mate and co-worker ‘Meat’ (Harry Cook), Len takes Phil out on a night on the town to celebrate his victory. As the night goes on and they all get drunk, Len bullies Phil into a series of humiliating and degrading acts. While all of this is going on, these events start to force Len to come to terms with his own sexuality.

After reading the synopsis, you can easily see why this film was really intriguing to me. It sounded like it would be a compelling character study that shows how destructive of a power homophobia can be to both the victims and even the perpetrators as well. The story definitely has some really thought-provoking themes and ideas at the center of it and it’s not hard to see why co-writer/director Dean Francis (who previously made the Aussie horror film ROAD TRAIN starring Xavier Samuel) would be interested in tackling this material. Particularly having the main protagonist “Len” be a homophobic character who’s wrestling with his own repressed homosexuality. Sadly the overall film itself didn’t live up to the potential that it could have had.

While the script (which Francis co-wrote with Stephen Davis, who wrote the original play that the film is based on) explores its dark and disturbing themes quite well for most part, sadly the non-linear style that use to structure the film’s plot didn’t really work for me. I get what they were going for, but it just came across as both jarring and confusing. Plus it didn’t help that some of the dialogue was poorly written and some aspects of the plot that were just plain bizarre, such as the flashback to how “Meat” got his nickname in particular was poorly handled. There was also an extremely underdeveloped subplot involving “Len” being haunted by the death of a mysterious unnamed woman (Maya Strange) who he couldn’t save from drowning, which I think shuld have been explored more. 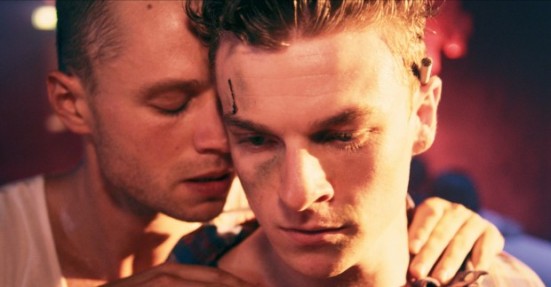 Even though Francis’ gives the film a unique visual style and makes it stunning to look at, I did feel that his direction became a bit too over-stylised at times. This aspect took me out of the film while I was watching it, which I think is something that a film shouldn’t do. I think if Francis took a more subtle ‘stripped back’ approach to his direction, I think would have been more involved with the film more than I was. Now despite my problems with the film, there are elements that I thought were well done. Even though they had to deal with some hokey and heavy-handed dialogue on occasion, the cast did pretty well with their performances. However the main star was definitely Matt Levett in the role of “Len Smithy”. The role is definitely very challenging for any actor to play, but Levett pulled it off extremely well. While he didn’t shy away from showing us how much of a monster “Len” can be, Levett was also able to bring some empathetic qualities to the role that made him much more complex and interesting as a character. It’s an incredibly brave performance from him and one that I think will definitely take Levett into places in the future. Plus the Cinematography (which was also done by Francis) was absolutely terrific, the score was really strong and the supporting cast did quite well in their roles as well.

Overall while there are a lot of compelling qualities about DROWN which made it thought-provoking as a film, unfortunately it wasn’t as great as it could have been mostly due to the weakness of both the script and direction. I think if both of these aspects were more refined and focused, it would have been a better film. I do admire and respect the film for what it was going for on both a thematic level and bravely tackling it’s truly disturbing subject matter without ever taking the easy-going route (believe me this was a very hard film to watch at times, so it won’t be for everyone). That being said though, I can’t help feeling like it was a missed opportunity.