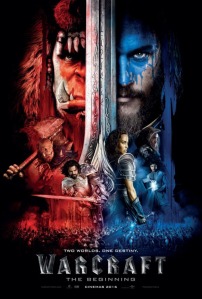 Duncan Jones’ WARCRAFT: THE BEGINNING is a film that has been in development hell for quite some time, honestly who thought we would actually see the day when the film got made and released? Video game adaptations happen all the time but they have a reputation for not being the best films, and the correct footing for these films has not quite been made as of yet. Just look at something as simple as STREET FIGHTER and see how they failed to adapt a fighter into something completely different that honestly made no sense.

WARCRAFT however is quite different, the game started off as a strategy game and the highly popular WORLD OF WARCRAFT went in the way of the MMORPG. There is a lot of background told within these games, and as such a film adaptation was no easy task. What do you include within the story? How do you make this appeal to a wider audience? Well in this instance, they did manage to fit a lot in, however if you are not at all familiar with the games this may not be as easy to grasp.

The realm of Azeroth has been at peace for many years, however that peace is threatened as a race of Orc warriors are invading the realm, as their own home is dying. The Orcs are lead by Gul’dan (Daniel Wu), who is using the Fel to cross the realms and conquer the new land. The Fel drains life in order to sustain it, upon seeing this chieftan of the Frostclan Durotan (Toby Kebbell) does not agree and wants to find another way. Upon discovering the use of the Fel, warrior Lothar (Travis Fimmel), Khadgar (Ben Schnetzer), King Wrynn (Dominic Cooper) and Guardian Medivh (Ben Foster) attempt to find a way to stop what is happening. Throw in help from half-Orc and Gul-dan’s slave Garona (Paula Patton) and you have yourself a huge epic fight.

If that summary did not make much sense, this reviewer can only apologise, as there is a lot at play in WARCRAFT. Being somewhat familiar with the games and the stories does help, but unless you really know the ins and outs the general film going public will struggle to understand everything. If you look at it as a film about two different groups with an invasion, battles, magic and visuals it may come off as easier to understand. Considering this is the first WARCRAFT film and there is a lot to actually explain about this universe, the film just throws us in as if we know everything. Not everyone will know about realms and magic, and thus the film begins to feel quite messy for the uninitiated.

Saying that WARCRAFT is a film for fans is fine, you want to be able to please that audience. But with something that is a big blockbuster you really need to appeal to the non-fans, make sure anyone can come in and follow it and WARCRAFT doesn’t make it easy. That aside, a victory for the film is the character of Durotan, someone that the audience can relate to and get behind. He is out to protect his family and his clan; he is a noble creature and wonderfully brought to life. On the human side we have Lothar as our main character, he is a likeable warrior however he doesn’t fair as good as Durotan even with a strong amount of screen time. Standout for the human side would be Khadgar a young mage who discovers the use of the Fel.

The strengths of the film certainly lie within its visuals to tell the story and create this fictional land. On the IMAX screen it looked absolutely stunning, it really is a feast for the eyes and the score is awfully grand and suited the visuals. The battle sequences are fantastic, and extremely well executed. Being able to see them well and to feel transported right there in the middle of it was quite the experience. There is no doubt at all that these elements are what is most successful for the film. The Orcs too are a huge strength and the film is at its best when telling their story. The performances from these actors are also worth noting with Toby Kebbell being a fantastic choice for the role. Clancy Brown has always been a powerhouse, and he was commanding of every scene he was in as Blackhand, and the character design was incredible.

The weaker parts of the film fall within the pacing, the story, and the human elements. Much like with BATMAN V SUPERMAN: DAWN OF JUSTICE the film felt like it was a much of scenes copied and pasted down, without any flow or pacing. This made the film feel more confusing, throwing a bunch of exposition out and expecting the audience to follow; this does not work especially with such a big film. Exposition is fine, however what was provided did not explain everything it needed to. There is no explanation of what certain characters are and what they can do; we are just expected to know. The audience does not need to be spoon fed everything, but a quick bit about what a mage is or what a Guardian is would have helped.

Aside from the actors playing the Orcs, the human side did not fare well at all. Travis Fimmel did what he could with what he was given; the performance was unfortunately laughable at times. They tease the connection between Lothar and Garona, however Fimmel and Paula Patton did not share much chemistry and in turn this fell flat. Ben Foster was chewing the scenery and his performance was over the top, and almost hard to watch at times, however it was fun as too. Ben Schnetzer did what he could and he was the best of the bunch for the human characters. Khadgar was a likeable character and he brought him to life, he was enjoyable when he was on screen and did not have many bad moments. The award for ‘I Do Not Want To Be Here’ goes to Dominic Cooper, he looked most disinterested when he was on screen and his performance had no weight to it. For such a strong actor it was almost sad to see such a weak performance, he gave nothing.

WARCRAFT is a big mixed bag, with positives and negatives that are on equal footing. Whilst not a complete failure, it is not a hailing success either. It can be looked at as an interesting experiment, and moving forward with video game adaptations one can learn from its mistakes. No not assume your audience is aware of the games, a large amount will not be. Make your film to appeal to both fans and the wider audience, give explanations when needed and find equal footing with your characters. It is rather glaring to see how uneven the footing felt between humans and Orcs, where it really should have been even. Duncan Jones certainly tried hard with this, this would not have been an easy undertaking, and credit should go where it is due.

Go in with an open mind, no expectations and see the film.