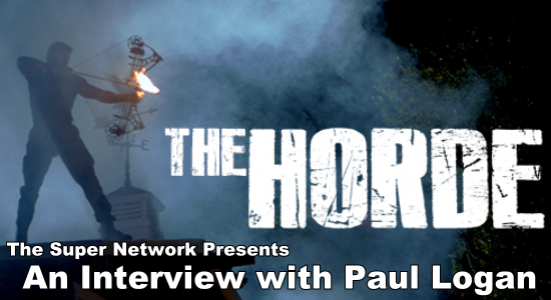 (The interview was conducted as a video interview and presented here is the audio version. Some parts of the interview were a little visual, such as Paul’s pug dog being on screen and getting discussed. Keep this in mind when listening and enjoy the show!)

THE HORDE is a new action/horror film from director Jared Cohn, starring Paul Logan, Tiffany Brouwer, Costas Mandylor, Vernon Wells and Bill Moseley. The film is available now to watch on VOD and iTunes, and you can check out our 4/5 star review right here.

To celebrate the release of the film, and to get you folks excited to see it or if you have to give you more an insight we have an excellent interview with Paul Logan. Paul not only stars in the film, he also wrote the script, he did his own stunts and he is a bonafide badass. The interview focuses on THE HORDE, the making of and where the ideas came from, as well as developing the characters and making this film stand out from the rest. For the fans of the Asylum Films we also talk a little about Mega Piranha and what Paul is working on next.

I would like to take the chance to give Paul a very special thank you for taking the time out to have a chat with me, and for giving me so much time to discuss the film. I encourage everyone to please show Paul some love on Twitter and give him a follow @RealPAULLOGAN and also @TheHordeMovie, support action and horror cinema and those who make them possible.

Remember to scope out THE HORDE and show the film some love, I had a great time with the film and it was a pleasure to speak with Paul.