Almost a month since I’ve managed to review Raw, please accept my apology readers! I have been under the weather, but I am back with this weeks Raw review. In case you missed it, I gave my run down of Extreme Rules and that ending definitely had me very pumped for Raw!

So how did the Raw after Extreme Rules stack up? Read on …

I have pretty much been waiting for Seth Rollins return since his injury and yesterday at Extreme Rules he showed up after the Main Event match and made a statement by delivering a pedigree to Roman Reigns and holding his title high. Seth opened the show to a crazy ovation, as expected and he lapped it up. It lasted several minutes before he could start talking and it didn’t take long before he turned on the crowd and became once again heel Seth. Not sure why, because with the heat on Reigns he could be their biggest heel and Rollins could be the biggest face. Instead Seth is the heel who no one wants to boo and Reigns is still the face no one wants to cheer. I am sure they were thinking having Seth cut the type of promo he cut (a damn good one I might add) that the crowd could cheer Roman. Nope, his music hit and he was booed heavily. Seth teased a fight but he left the ring once Roman got in. This prompted Shane OMac to come down, and he made the Main Event for Money In The Bank PPV. Seth Rollins vs. Roman Reigns for the WWE World Heavyweight Title. Disappointed we didn’t get Seth say that Roman might be THE GUY but he is THE MAN. Seth did remind us he never lost the title, and I think this feud will take us through to Summerslam.

The qualifying match ups were really good, pitting guys against each other that definitely leaves us all guessing as to who could win. Ginger vs. Ginger was our kick off match and Sheamus is back. I assume he was out doing the publicity for TMNT 2, judging by his posts that would seem the case – can’t wait to see him as Rocksteady btw. So it was good to see him back and as always I never complain when my Sami Zayn is on. I was almost sure that Sheamus would get the win, however I was wrong. This turned out to be a huge upset victory for Sami Zayn, and much deserved I might add. This was a pretty decent match and there is a spark of chemistry between these two, and a follow up match would be quite welcome. Lots of steady action, and a boom of an ending which saw Sami hit the helluva and get the pin on Sheamus. Leaving Sheamus extremely unhappy, I think I know where they are going with him and Sami is in MiTB and he will no doubt be a highlight of the match.

The New Day vs. The Social Outcasts

The New Day made their way out, and they had something set up in the ring. A birthday cake to celebrate the 1200th episode of Raw. They teased about how it’s bad luck having a cake in the ring, and Big E took the cake and teased some more. I missed a little bit, and when I got back the down to three Social Outcasts were in the ring. The match then took place and it wasn’t long and it wasn’t much of anything, the Outcasts are treated as such a joke and they shouldn’t be. There is a lot of potential to build them up as something but instead they are the new JOB Squad. Anyway The New Day picked up the win and afterwards Heath Slater got hit with the cake, because funny? 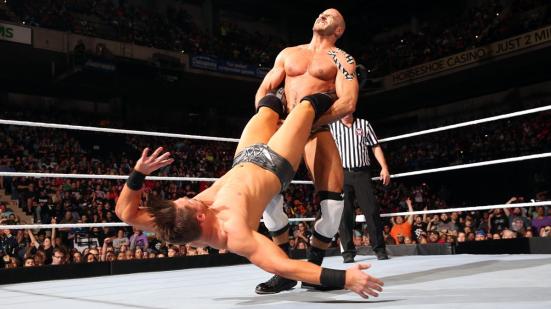 The Miz and the Goddess Maryse come out and brag about the victory in the Fatal Four Way Match and how he retained his title. This went on a little long and almost a bit into none PG territory with those two until Cesaro came out. I have to say this was a really good match, and as I’ve said before The Miz has gotten a lot better in the ring. He definitely feels fresh once again and it is thanks to Maryse, and The Miz even brought it up in the promo. There is some definite chemistry in the ring between these two, and it was nice they actually were given the time to have a 1 on 1 match without any distractions. Both men looked really good, and Cesaro played up his shoulder hurting really well, it even hurting so much he couldn’t pull off the Swing. Again this match was intense and it wasn’t easy to guess who would win, it really made me believe it could go either way. In the end Cesaro managed to pull out a victory and qualifies, which for me makes sense and The Miz can go on being the Champion and have a fresh feud. 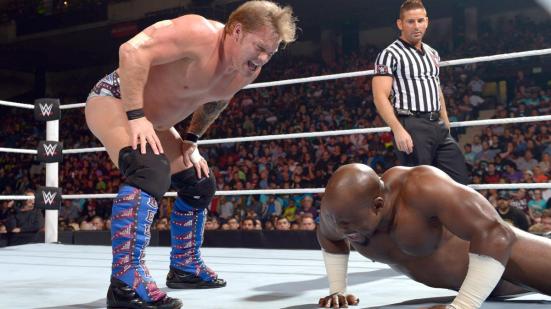 Earlier in the show Apollo Crews was giving an interview and Sheamus came along and viciously attacked him, taking out his loss on the ‘New Era’ star. However Apollo came out as if that didn’t happen, not showing any sign of being hurt, which was not good. When compared to how Cesaro sold his hurt shoulder, this isn’t good booking (if it was booked he failed then) and it doesn’t make him look good. The match itself was okay, the chemistry wasn’t really there and Jericho did look frustrated especially when Crews messed up a spot. Jericho had like 50 thumb tacks taken out of him and it showed, he must have been hurting and he really gave this match his all. I think the best thing is to send Crews back to NXT and bring him back later because he needs work and he could be something special.

HOW YOU DOIN? Enzo Amore is back from his concussion and the crowd goes wild! I loved every bit of this, he was going wild and it was great. He cut such an entertaining promo and this guy oozes charisma something crazy, he won me over pretty quickly and he has fast become one of my favourite guys to watch. After the promo the Dudleys came down, and the match was on. Not a bad match, I think this feud has run its course now. Big Cass for the most part looked really good and even Enzo got to hit a move on DVon after he was knocked down. I really want to see these guys get into the tag division, even feud a little with The Vaudevillians because that is gold. Big Cass got the big win, and I just want to see these two on every show! 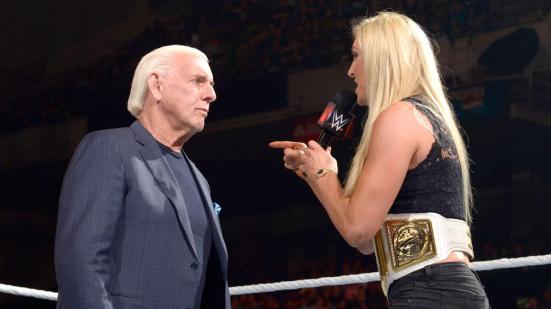 This was an odd segment, I was expecting Charlotte talk herself up and then have one of the other women or two come and challenge her. I was also expecting some kind of explanation as to her alignment with Dana Brooke. That did not happen, instead what we got was something very difficult to watch, not because it was a bad segment but because Ric Flair sold it so well. Charlotte has officially ended her relationship with her father, she dissed him in a brutal fashion and she did so without breaking character and proving she is the top female heel right now. While I am sure others may have thought this was bad, I thought it did the job just fine. Ric looked genuinely heartbroken, and it sold the entire thing really well. It is time to split them up and having Charlotte with Dana is a good move, it’ll only expand things and I like it. Even the announcers looked shocked by what happened, it was sold well. Backstage a heartbroken Ric was walking to leave backstage, got hugged by Arn Anderson and refused to comment on what happened. I only expect bigger things for the division now, but I am disappointed there was no women’s match. 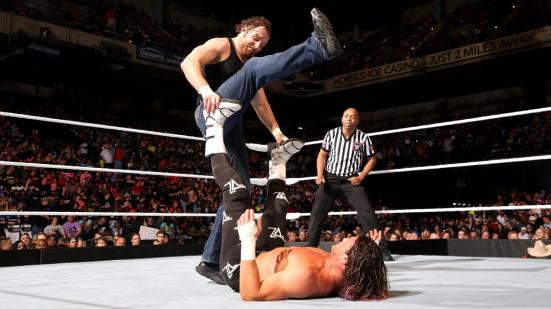 Backstage Baron Corbin gave an interview, which Ziggler interrupted and the two will have a match next week – feud not quite over *sigh*. This match was okay but it didn’t really click with me and I can’t work out why. Maybe it is because the way Ziggler has been booked that I just don’t get excited by him anymore and I really should? Or maybe I want to see Dean Ambrose involved with something different? I just don’t know what it was exactly, both men pulled off a decent match though and it did pick up towards the end. I almost thought Corbin would show up, but he didn’t and Ambrose got the clean win. The MiTB match is starting to take shape, and I like who is involved. There will be I think 2 spots left, and my gut tells me John Cena and Randy Orton may be filling them.

Before the match AJ Styles addresses his match from Extreme Rules, he says if The Club and The Usos didn’t get involved he would be the champion. This prompts Anderson and Gallows to come out, basically after some back and forth AJ says he wants them to keep their friendship and business separate. The boys said no, it’s over between them, they aren’t friends or anything and they leave. 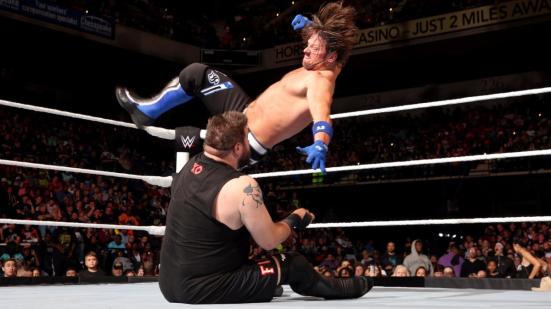 On to the match and what a way to close Raw! These two have insane ring chemistry and they really went at it hard with this match, they delivered the goods and they really made the MiTB spot mean a lot. The action went out of the ring, and Owens even slammed AJ on the steel steps in a very brutal move. There was so much going on with this match, it was almost hard to keep up! I was laughing so hard when Owens was mocking or yelling at Cole, the man just can’t lose. The match came to an end after Owens stopped AJ from doing the Phenomenal Forearm and scored a clean victory. This was pretty shocking as I was sure the boys would cost AJ the match, but there is definitely something big brewing for him. Owens celebrated his win and AJ looked heartbroken.

This was mostly a really good Raw, lots of good moments with only a few low ones. There was a good backstage interaction with Seth Rollins and Stephanie McMahon who refused a hug from him, and told him things have changed. He didn’t looked overly happy, so that should be interesting. There are a lot of things brewing and I am excited to see where it all heads. There are two matches booked for Smackdown, with a US Title rematch and Cesaro gets an IC Title match.