When I think of modern comedians who aren’t afraid to push the envelope in terms of humour, one of the first names that I think of is Sacha Baron Cohen. From his characters “Ali G.” to “Borat” to “Bruno”, there is no limits that this man won’t go for a laugh. While his comedy can be either shocking or offensive, there’s always a point to it that makes it work. I’ve enjoyed most of what I’ve seen of his work so far, so you can definitely say that I was definitely looking forward to his latest comedy GRIMSBY (which is titled THE BROTHERS GRIMSBY in the U.S.).

The film tells the story of Norman ‘Nobby’ Butcher (Sacha Baron Cohen), a British soccer hooligan who lives in the British town of Grimsby with his girlfriend Dawn (Rebel Wilson) and their 11 kids. Despite his happiness, there is one thing that is sadly missing in his life: his younger brother Sebastian, who he hasn’t seen in 28 years since they were split up as kids. Nobby has been looking for himself ever since to no avail. One day he receives word from a friend that Sebastian has been found and that he’s going to be at major press event in London. When Nobby gets there and finds his brother, things don’t go quite according to plan. He discovers that Sebastian (Mark Strong) is actually a spy for MI6. When Nobby accidentally sabotages his brother’s mission, they both have to go on the run after MI6 accuses them for an assassination plot. To clear their names, the bothers reluctantly team up to find the real culprits and stop them from destroying the world.

Now I should state that your enjoyment of this film will come down to how you feel Sacha Baron Cohen’s previous films/TV shows. If you loved them, you’ll definitely enjoy this. But if you didn’t, then your probably not going to like this too. So what did I think of it myself? Well, I have to admit that I thought that it was a bit of a mix bag myself. Before I go into why that is, I have to answer the question that you’ve all been wondering: is the film actually funny? Well, that’s a tough question because comedy is such a suggestive genre. What one person finds funny, another person isn’t going to. So I’m not going to lie: I shamefully admit that I did find GRIMSBY to pretty funny at times. As you would expect from co-writer/producer/star Cohen, this film was completely outrageous, vulgar, crude, politically incorrect and so wrong on so many levels, that I couldn’t look away from the craziness that I was witnessing onscreen. I was going back-and-fourth between laughing at the film’s genuinely funny moments to being absolutely shocked over how wrong some other scenes were (there is two scenes in particular that were so insane and over-the-top, they honestly have scarred me for life. Don’t worry, you’ll know which scenes I’m talking about when you see them). Cohen has made his career out of making films/TV shows that walk between hilarity and vulgarity, this film is no different. So on the comedy front, Cohen succeeded in what set out to do (whether that’s a good or bad thing, I honestly don’t know). However the one key element that made this film watchable to me, was the chemistry between the two leads. Sacha Baron Cohen and Mark Strong are both solid as “Nobby and Sebastian Butcher”. Cohen as expected continues to be a truly fearless comedic performance with his character “Nobby”. While he isn’t quite as outrageous like some of his most famous characters “Borat” and “Bruno”, Cohen still ejects “Nobby” with that same energy as those roles. But surprisingly though, the one who really impressed me the most was actually Mark Strong as “Sebastian”. While he’s basically playing the straight man of the two roles, he fully committed himself to performing the film’s most outrageous moments that you have admire his fearlessness for embracing this type of film. 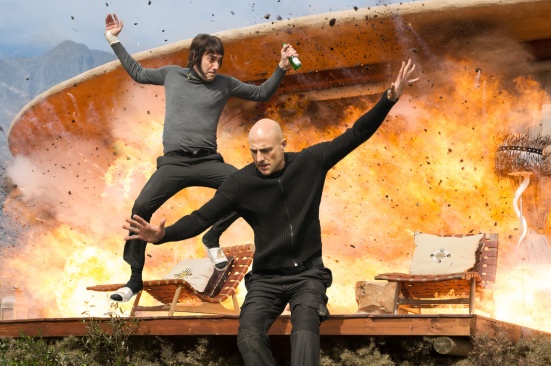 However despite aspects of the film that I liked, sadly the rest of the film around those things was pretty flawed. While the script (written by Cohen, Phil Johnston and Peter Baynham) has a lot of interesting and humorous ideas, it took a really weak approach when it come to the those elements. The main one being the relationship of the film’s two main characters. Both Cohen and Strong have a good rapport with each other, but I felt that the script didn’t really emotional invest us into their relationship, especially with their reunion. These are characters who’ve haven’t seen each other in 28 years but when they first get together after that time, it just felt really rushed. It felt more that they haven’t seen each recently rather than 28 years based on how they reacted to the situation. Plus later on when we get to the reason why “Sebastian” is angry with “Nobby” over why they split up as kids, it should be a real emotional moment but it just gets glossed over pretty quickly. I have a feel that a lot of stuff must have been cut out ’cause at a running time of 84 minutes, the film feels very rushed and choppy at times. I wouldn’t be surprised if they released a longer cut of the film down the road at some point (especially since most of the jokes in the trailers aren’t actually in the finished film itself). Also while I thought having French action director Louis Leterrier (the director of THE TRANSPORTER, NOW YOU SEE ME, CLASH OF THE TITANS and THE INCREDIBLE HULK) was really interesting (especially since this is his first full-fledge comedy that he’s made), sadly I found he’s work here was a bit all over the place. When it comes to some of the film’s action set pieces they were solid (particularly the ‘Green Earth’ sequences, where we see the action/fight scene from the point-of-view of the character, were quite inventive) but at other times, he resorts to the annoying hand-held cam/fast-paced editing style that they loose any impact that they could have had. Plus the supporting cast (Penelope Cruz, Isla Fisher, Rebel Wilson, Ian McShane, Gabourey Sidibe, Barkhad Aldi, Scott Adkins) were all mostly wasted in their roles and I will admit that some of the film’s jokes can be both really juvenile and rather tastless at times.

Overall while GRIMSBY will definitely be this year’s most divisive comedy (this is a film that you are either going to love or absolutely hate) but for me personally, it was a watchable if rather mix bag of film. Despite the committed work of its two leads and some really funny moments, the film’s major flaws and tastelessness of some gags held the film back from being as good as it could have been.