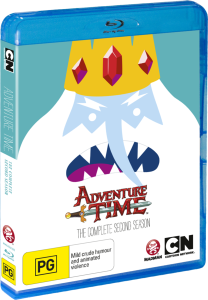 The Show:
Now before I go into my review, I need to make a confession and it’s one that I feel bad for. What’s that you ask? I’m a lousy TV show watcher. There have been a lot of TV shows that I’ve been watching over the last couple of years that I haven’t had a chance to get around to catch up on. One of them in particular was the animated series ADVENTURE TIME. After the first season a while ago (you can read of it here), I became an instant fan and I couldn’t wait to check out more of the show. Now nearly two years later, I’ve finally gotten around to watching the second season (Yeah, I know. I know. I’m very slow). So how does the second season of ADVENTURE TIME compare to the first one? Read on and find out!

For those who don’t know what ADVENTURE TIME is about, the series follows a human boy named Finn (Jeremy Shade) and his best friend Jake (John DiMaggio), a talking dog who has the magical ability to change his shape and size. When they’re not busy protecting the citizens of the Land Of Ooo from the forces of evil, they spend time with their friends and get involved in many adventures.

Even though I was a big fan of the first season, I must admit that I did wonder if the second season (which consists of 26 episodes) would be able to continue with both originality and uniqueness of what made that first season so very special. Luckily I’m happy to report that this second season is just as terrific as the first one. While it does continues the tradition of the first season by having each episode have its own self-contained story but also for this second season, the makers behind the show decided to mix it up a little bit with some of the episodes. There are some occasionally episodes that follow-up on from some plots that happened during the first season (in the episode CRYSTAL HAVE POWER, we find out what happened a certain character that we assumed had died back in the first season) and there are a few that have a story that’s stretched over a couple of episodes (the two episodes MORTAL FOLLY and MORTAL RECOIL act as a two-parter). Granted they only do either of these things on a few select episodes, but it does make me interested to see if they continue down this path in the next couple of seasons (unlike myself, I assume hardcore fans who are more up to date on the show than I am will know the answer to this question. I’ll find out for myself when I see the next season). As for the episodes themselves, there are a lot of great ones during this season (my highlights include IT CAME FROM THE NIGHTOSPHERE, VIDEOMAKERS, HER PARENTS and THE SILENT KING to name a few). Actually some of my favourites episodes had been ones that followed our heroes “Finn” & “Jake” just doing every day stuff. Sure some of the premises for these episodes were on the surface seem pretty straightforward, but the makers behind the show bring their own unique twist that makes the episode feel fresh. Also when you think a story is going to go one way, it takes turn into a different direction and delivers a payoff that’s pretty hilarious.

Just like the previous season, the writing of these season 2 episodes are just funny, wacky, offbeat and surreal. The show continues finding that great balance between having humour that’ll appeal to both kids and especially adults. I honestly think there was a lot more adult-oriented humour in this season than there was in the last one (while a lot of it was subtle, I was extremely surprised how some of it actually manage to get on the show without any problems). The cast once again all do a terrific job with vocal performances as these loveable characters, especially both Jeremy Shade and John DiMaggo whose onscreen chemistry as “Finn” & “Jake” continues to be fantastic. The supporting cast (Tom Kenny, Hynden Walch, Olivia Olson, Polly Lou Livingston, Pendelton Ward) were all equally wonderful with each of their characters and it was also pretty awesome to that the creators were able to get well know actors (Ron Perlman, Andy Samberg, Peter Stormare, Paul Reubens, Henry Rollins and many others) to make a guest appearance on the show to voice a character. Also one of things that really loved about this season is that the show’s creators delved into more of the character’s backstories, which I thought added some interesting layers to them (we learn a bit more about our heroes “Finn” & “Jake” and even get an empathetic view at the “Ice King”). Plus we even get to explore more of the world of Ooo and as well as meeting some new characters. The 2D animation in the series once again is top-notch and I like how the show continues organically put in moral lessons in each episode without it ever feeling too heavy-handed or preachy. Now your probably wondering, were there any problems I had with season 2? To be honest I didn’t really have many and if did, they were only really minor ones. The only major one I can think of is that I did feel that some of the supporting characters were a bit underused this season (particularly “Lumpy Space Princess”, whose one of my favourite characters on the show).

Overall while I do admit that did enjoy the first season just a tad bit more, the second season of ADVENTURE TIME was still a terrific and hugely entertaining one that I had a great time with from beginning to end. This season pretty much continued to prove to me that ADVENTURE TIME is one of the best and most unique animated shows currently on TV today. Now I can’t wait to see where the series goes next with season 3!

The Australian Blu-ray:
Audio/Video: The video is presented in 16:9 anamorphic widescreen 1080p HD. This is a terrific HD transfer and the animation just looks absolutely beautiful. The Audio is presented with Dolby Digital English 2.0, the subtitles are in English. The audio throughout the series was terrific and I didn’t have any problems with the sound at all.

Sadly there isn’t much in terms of special features on this season 2 Blu-ray (especially when compared to the Blu-ray for the first season, which was packed with extras). However when it comes to audio commentaries though, this BluRay definitely wins out. The season 1 Blu-ray only had audio commentaries for 4 episodes, this season 2 Blu-ray however has audio commentaries from creator Pendleton Ward and the crew on all 26 episodes. While that does sound fantastic but unfortunately though, there is a major drawback with them. Before you play the audio commentary version of an episode, there’s a quick message from Pendleton Ward explaining that after the commentaries were finished, he edited some parts out of them in post and used songs/music to fill in those missing gaps. I’m not sure why he did that but from what I assumed, there must have been some racy parts in those sections and they decided to cut them out in case they got into trouble (especially since these commentaries were recorded for a kid’s TV show). Sadly though, I didn’t find the commentaries all that interesting and the musical interludes were annoying. The Crew of ADVENTURE TIME, Interviewed By Pendleton Ward featurette was just really weird. It starts off rather simple enough with Pendleton Ward interviewing each of the show’s crew members, but it takes a bizarre turn when ask to watch something on his computer screen. I didn’t get the point of this feature, it was just dumb and utterly pointless. So yeah, this Blu-ray has a pretty disappointing set of extras.