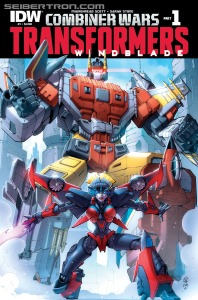 The COMBINER WARS have begun!! The second epic crossover event in the IDW TRANSFORMERS series has started with the Opening Salvo from the ongoing Transformers series (previously titled Robots in Disguise) in #39 and Part 1 from the pages of Windblade #1.

The COMBINER WARS has been hinted at throughout Phase two of IDW’s reboot of TRANSFORMERS which began back in early 2012. The clash between these giants of the TRANSFORMERS universe has been mentioned throughout Transformers, written by John Barber, under under the original title, Robots in Disguise, with the story arch First Strike which began in #33 of Transformers acting as a prelude to the crossover event focusing on the hunt for the ENIGMA OF COMBINATION and the rebuilding of the AUTOBOT combiner, SUPERION.

Working from a story by John Barber and Maighread Scott, who returns following her successful run of the first wave of WINDBLADE comics which were released last year, the COMBINER WARS crossover is a far more well thought out and executed crossover story arch than that of last years Dark Cybertron event which was a bit of a let down due to too muhc happening at once, as well as a parade of different artists working on different pages of each issue. The final result of that crossover was far too bloated to really be enjoyed.

Luckily this time around the COMBINER WARS is working from a story that has been in the works from the beginning and has only two artists working on a single issue each with Livo Ramondelli (Transformers Autocracy) working on Transformers and Sarah Stone ( Transformers Windblade) focusing on Windblade. Both issues are extremely well written and the first strike in the comflict which has seen STARSCREAM make his move on the lost colony of CAMINUS, homeworld of titanspeaker, WINDBLADE (the very first fan built TRANSFORMER). Although both issues have been more of a political drama rather than an all out battle, something which will most likely change when other combiners are unleashed.

The artwork from both Ramondelli and Stone is exceptional, as they have both been two of the finest artists to have worked for the TRANSFORMERS franchise. However these issues are for people who have been reading the previous comics as without the previous knowledge of what has happened, readers will found themselves as to whose who and what is actually going on. This doesn’t hurt either comics as that’s the gamble that younger readers and others who are joining the TRANSFORMERS bandwagon. However unlike the live action films and the current animated series that are airring, IDW’s TRANSFORMERS series is really something for the fans because this is the clash of the COMBINERS that fans have been waiting for.

What makes this crossover event extra special is that HASBRO has released a toyline to tie in with the comics, although sadly most Australian toy stores have only just released the 1st wave whilst American collectors are currently awaiting the arrival of the 3rd wave sometime this month.