I did miss this bit as it aired, however James sent me the link to it on WWE’s YouTube channel. Really surreal to see Sting start off Raw. I think the right think has been done by keeping Sting mysterious and not using him much. Doing this really helps the build and the fact that Sting stopped Stephanie from slapping him was a pretty cool moment. The segment did its job, and I am excited to see Sting vs. Triple H at Wrestlemania.

The build up for the IC Ladder Match at Wrestlemania has been pretty good, it probably has had more build up than some other matches actually. The build up continues here with a Tag Match with four of competitors, unlikely teams at that. The match itself was good, a fun way to kick off the matches on Raw. The real highlight wasn’t actually in the match, it was after Ambrose and Truth won the match. Truth got Ambrose to dance, yes he really did. It was pretty entertaining and I am sure many Ambrose fangirls were squeeing away at that.

Build up for the Andre The Giant Memorial Battle Royal, with a so-so match. Having 10 guys in this made it a little confusing to follow, not sure much thought really went into booking this match. The main points here are will Mizdow finally fully turn on The Miz during the Battle Royal and will Ryback be the winner at Wrestlemania? A decent way to build all of this up, just felt forced and messy. They had Bill Simmons on commentary, I don’t know who he is but he was fine.

As voted for on the WWE App (yes I voted for J&J), this is a match I am pumped for with WM. Sadly thought this match was barely that, Orton got his hands on Knoble and Mercury, Rollins managed to escape Orton. That was basically it, for a match that has been slowly building for months, this was a poor way to build it up more the week before WM. I have no doubt in my mind these two will do an outstanding job, but wow what lackluster booking. It makes sense for Orton not to get Rollins, but more could have been done here. 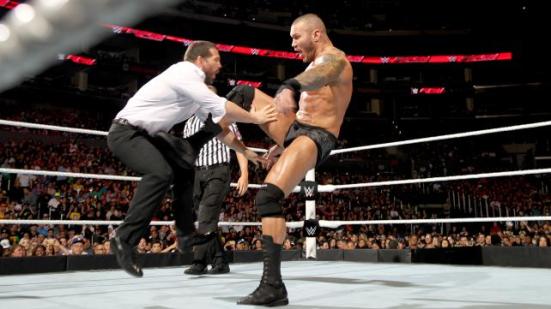 I actually was kind of hoping Paige would dethrone Nikki, but it wasn’t meant to be. My thinking is that there is a Divas title match on the Raw after WM and someone else will get the title (maybe Naomi will finally get it?). It was a fairly good match, with tensions between Paige and A.J. being the real focus. The Bella’s playing their games, trying to get the upper hand, makes sense. At least this wasn’t stupid like spray tan, but rather testing their alliance. Nikki got the win after A.J. accidentally hit Paige thinking it was Nikki. Glad to see the Divas are getting longer matches, hopefully the trend continues,

I will admit this was a fun segment, it wasn’t long either so it didn’t out stay its welcome. Snoop Dogg looked like he was having a blast, Hogan was clearly happy to be there and I am sure Axel enjoyed every minute of it. Something really needs to come out of Axelmania, because this is the thing that is doing wonders for Axel. A nice little segment to fill the show, it was more welcome than that Wiz dude the other week (I have no idea who he is). 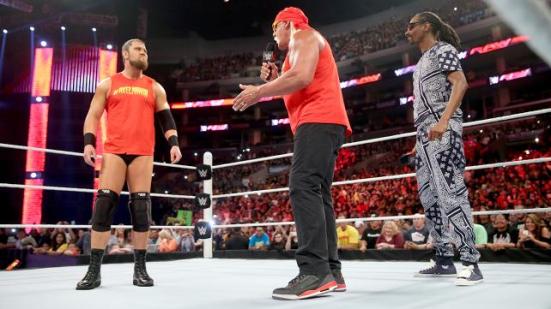 This was a rematch from Smackdown, in which Nattie picked up the win over El Torito. I am enjoying the Tag Team of Tyson and Cesaro, they have great chemistry as a team and it has gotten them titles, so no complaints from me. It is good to see Los Matadores in the mix, they are a good team with a silly gimmick. Not a bad match, I was too busy looking at Nattie in her sexy bondage type outfit. The finish made sense, it came down to El Torito and Nattie again but this time El Torito got the win. Looking forward to the Tag Team action at Mania.

These two have had many matches together and this one was one of their best. It was great back and forth action, Swagger got in some offense, but it was clear Rusev wasn’t a happy man. He dominated Swagger at the end with the Acolade and then Rusev went nuts, attacking Swagger outside the ring, Cena tried to make the save but was shut down. An interesting build up here, they had a video package of Cena talking about the importance of the US Title. The feud has been heated, and this was a good way to keep it all fresh in our minds and lead into the their big match.

Bray Wyatt Promo for The Undertaker

I think this was the best promo Wyatt has done in the lead up to his match with The Undertaker at WM. It was intense and it had the theatrics which has made both these men so memorable. Wyatt could very well take Undertakers place as a mysterious character and someone who has the theatrics with them to make things that more exciting. Their match is going to be very interesting, lots of psychology, it’ll be one to watch that is for sure. This promo did it’s job. 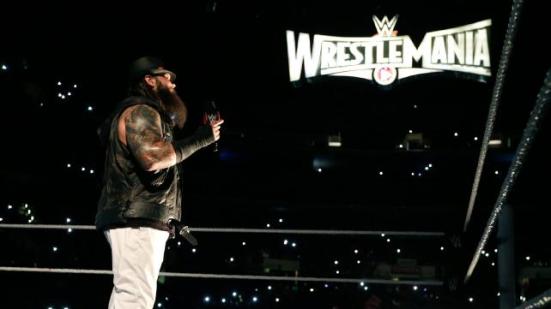 Another WWE App vote, Dean Ambrose was voted as the referee, which I expected even though I voted for Truth. The original plan for WM as read on various sites was Bryan vs. Ziggler, since that isn’t happening I am not surprised they had a match on this Raw. It was a really good one, lots of back and forth action and these two men proved why they are at the top of their game. Bryan lost again, I was sure he wouldn’t. Ambrose called it down the middle but Ziggler got a Dirty Deeds at the end. As I said the Ladder Match has had a lot of build up, and all the men fought at the end with no one standing tall.

This was all about Paul Heyman building up the match, there is no one else that could sell this after the crowd turned on Reigns at the Royal Rumble. He has made this match one that I do want to see, simply by talking. Reigns did come out, and he was face to face with Lesner, he didn’t talk. All that happened was the belt, and at the end both men were gripping for it, but no one had the upper hand, and Raw ended. It was an anticlimatic ending, but I think WWE wants to keep the fans guessing. With no clear upper hand, the match really can go either way. Not bad, the rating is high for Paul Heyman.

Final Thoughts – Not a bad Raw to get ready for Wrestlemania but I really felt it could and should have been a bigger show. I want to be a lot more excited than I actually am. Last year I was giddy for weeks but this year I am not feeling it.