What’s a Blog-a-thon? This movie exchange is a challenge, its participants have chosen films the other has not seen to watch and review.
Chris’ criteria for Marcey: Japanese Anime of the 1980’s
Why Chris Chose This Film For Marcey: The second film that I have selected for Marcey is Yoshiaki Kawajiri’s 1987 neo noir thriller, Wicked City. I choose Wicked City because it is one of the perfect examples of hardcore R rated anime, and is filled with monsters, ultra violence and graphic sex, mostly depicted as rape. It is also a beautifully animated film that feels and looks as though it was a mix of Ridley Scott’s Blade Runner and anyone of David Cronenberg’s films from the 1980’s. Kawajiri is one of Japans most underrated anime directors, partly because most of his films have caused some form of controversy, mostly to do with the ultra violence and sex/rape scenes that are seen in his films. However despite this, Kawajiri’s films have become cult classics and have become to be seen as masterpieces of anime. I wanted Marcey to see this not only because it is one of my favourite anime films, but also because I know that she’ll enjoy all the general weirdness that the film contains. 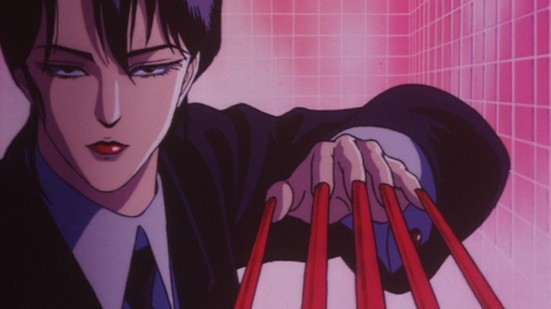 Marcey’s Review
Considering my own taste in films, I wonder why I hadn’t come across Wicked City until now? This is a very Marcey-type of film, violent, lots of nudity and bizarre sex and a strange kind of sci-fi/neo feel to it. If Chris intended to shocked me with this, he didn’t, but I am thankful I had the chance to experience the film, without much prior knowledge.

Wicked City isn’t an easy film to explain, I will do my best to give some kind of plot description. There are two world’s, Earth and the Black World. They exist in different dimensions but there is a cross over. The two world’s have existed with each other because of a peace treaty. The time has come for a new peace treaty to be signed, and there are those within the Black World that don’t want this to happen, they are the radicals. To make the peace treaty happen, a 200 or so year old man who over saw the last peace treaty Giuseppi Mayart needs to make the signing. To ensure he gets there in one piece, two Black Guards are assigned to protect him, Taki Renzaburo a human and Mackie from the Black World.

Those are the basics, and it isn’t too complicated once you get into the swing of things, and that description of the plot doesn’t make it sound too crazy or violent, but it is. The ones from the Black World look human but they have powers and they can morph into strange and ugly creatures. The fights that are had between the two factions are violent. There is also a lot of sex in this film, and quite a bit of it is rape. The use of sex is an interesting one, it represents the basic need of humans, the one weakness that seems to resonate with a lot of people. It is used as a weapon a lot of the time, but there is a scene of pure love that exists. Yes it could have been left out completely, but it wouldn’t be the same film. As crazy as the film looks, it is actually a really smart film. It has a lot to say under the surface, and it can be something to miss if you aren’t paying attention. The harmony of two peoples is what is at stake, and this can easily be used to talk about many a people who don’t get along and those who just long for peace. It also sends a strong message that different people from different places can be together, which is kind of a nice message in the end. One could argue it has a negative view on women, however I don’t think that is so. The real hero of the piece is a woman, a strong and resilient woman. Yes there is a woman who is pure evil in this (teeth in her special area, eww), but she isn’t the real representation here. She wants to stop a beautiful thing from happening, and in order to get something the radicals wanted she needed to use her sexuality, doesn’t make her a bad representation. There is a man as equal as evil as she is, so the message isn’t that woman are bad, it goes both way, as it does with being good.

Wicked City is a smart film, with some insane and intense visuals, it is not for the faint at heart (unless you’re me). It does take some thinking to work things out, there is a good twist, but I did figure it out early on, and I did really like it. Once you get passed the weird tentacles, this is a really enjoyable and intelligent piece. Another reason to love Eastern cinema, animation isn’t just for families, it is for adults as well. There are no real taboo’s and nothing gets in the way of telling a story. The animation is really rough, but it is stunning, and definitely suits the story. I absolutely loved the film and if anything, it could have been longer.

Side note – if David Cronenberg made Japanese anime, this would what it would look like.

You can purchase Wicked City through Madman – http://www.madman.com.au/catalogue/view/1700/wicked-city