#CancelWWENetwork. That seems to be the theme heading into this week after the controversial creative decisions of the first WWE PPV event of 2015. I’ll start this review by stating that to its credit, this event had one of the best championship main events in recent memory. Brock Lesnar, John Cena, and Seth Rollins deserve heaps of high praise for their performance last night. The booking of said main event (the drama) is how the Rumble itself should have been booked. But more on that later. After the Rollins/Lesnar table spot, which I’m sure will be on highlight reels for years to come, had me believing that just maybe someone other than the Beast Incarnate would walk out of Philly WWE World Heavyweight Champion. That said, Lesnar had to make his epic comeback to retain. The man is coming off of ending The Undertaker’s undefeated streak, and like his part time status or not he is the most legitimate champion the company has had in ages. It wasn’t a squash fest, it was a back and forth opus that could just stand as Match of the Year. It was that worthy. So I tip my hat to each man. 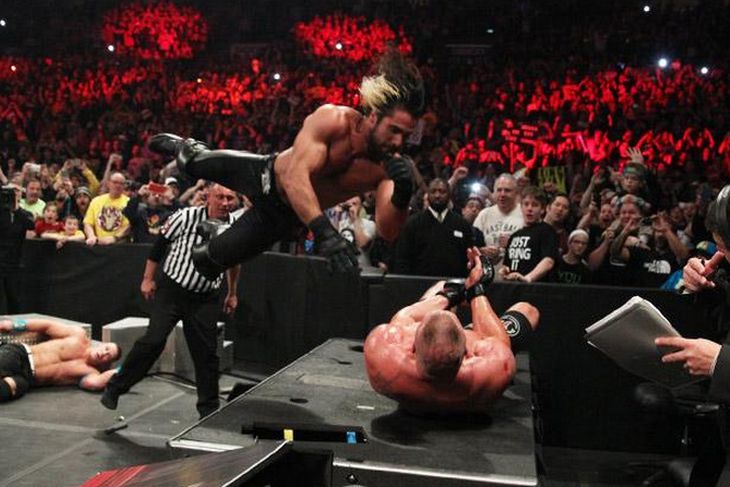 The Rumble PPV is well known for featuring a smaller card with fewer mid-card matches to raise a stink over but we had some servicable ones here. Any match that features the Diva’s (especially Paige) will always be welcome with me and we had a decent one here in Natalya & Paige vs. The Bella Twins. Paige continues to attempt to seduce me with her sensual in ring demeanor and it continues to work wonders. WWE struck gold when they signed her. Additionally, I will continue to be a fan of the Bella’s, especially Nikki. She displays in ring aggression in her moveset that you don’t see in many when it comes to the Diva’s division and I dig it.

The Ascension also went to battle with the legendary New Age Outlaws and you will also never hear me complain about a good bout of nostalgia. The Ascension impressed me during their run in NXT and hopefully a win over a team like the New Age Outlaws will work wonders for a blossoming run. The USOs went up against The Miz & Mizdow, it is a match that is played out but Damien Sandow continues to own the gimmick he’s been given and it’s a joy to see the fans as behind him as they have been as of late. He sells whatever match he is in. Now, I have to say I marked for the Cesaro & Tyson Kidd victory over The New Day faction. Cesaro is in my top five as far as performers go and Tyson Kidd is criminally underrated so giving these two a rub is much deserved and it was awesome to see. I’d love for them to get a lengthy Tag Team Championship run if it means seeing them do their thing weekly. Make it happen!

And now, the Royal Rumble match itself. It should be said that there were a few moments that put a huge smile on my face like the appearances of DDP and Bubba Ray Dudley. It leads one to wonder if Bubba Ray is back for good or if this was just a one off thing. Now, things turn an ugly turn when Daniel Bryan made his way to the ring and was eliminated way sooner than all expected him to be. Which leads me to the only beef I had with the event. Many fans have spoken out against the predictability of the match more than the ultimate outcome, and that’s what I subscribe to. Once Daniel Bryan and Dolph Ziggler were eliminated the fans knew where the match was going and they didn’t appreciate it. If Roman Reigns and Daniel Bryan had been the final two in the match, I would have respected being kept on the edge of my seat in seeing who the WWE would put there faith in, and maybe just maybe Philly would have too. But when your final three are Big Show, Kane, and Reigns the cat is out of the bag. Drama would have brought this match a long way in my opinion.

As far as Roman Reigns being the victor, I am not as upset as most are about the decision. Would he have been my pick? Nope! Do I think he’s ready for the main event? Not necessarily. But we can’t preach about how we want the future to be now and not let somebody fresh take the reins (pun intended) and sink or swim. I felt sorry for Roman as he was looking up at the WrestleMania sign in tears as an area full of fans were booing him to hell and back. I would have chosen a different victor, but I took solace in the fact that the winner was not someone named Cena, Orton, or Batista. Will the Rock cotinue to make appearances to attempt to get the fans on Roman’s side? Philly wasn’t buying it. But what’s done is done and now what you have to do is everything you can to get the fans invested in this. They have their work cut out for them.