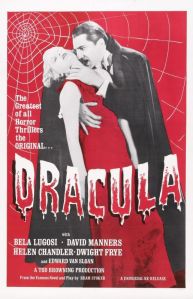 Funny what time and emotional maturity does to you.

When I first viewed Universal’s first of their many Golden Age releases, I honestly didn’t think much of it. Yes, I had heard this was not THE first Dracula adaptation (and neither wasNosferatu for that matter), but it was this film that embued pop culture for years to come about the image of the Prince of Darkness. The sharp evening wear, the thick accent, the hypnotic stare, everything that Bela Lugosi brought to this role has since become something of legend. However, even with all of these accolades and knowledge in mind, after watching it on my own on a rainy night back in ’01, all I thought was “That it? Really? Hm. Whatever.”
Truly-ruly.

I was vastly underwhelmed by this ‘classic’ that I wasn’t sure who to be more disappointed in- myself or the movie. So for the longest time, I didn’t watch it again, mainly because I figured since I had seen it once, that was all I needed. Until very recently however, prior to this write up, I went on a Universal Horror kick- I rented the greats starring Lugosi, Karloff and Chaney Sr., and the more I watched them, I found a whole new appreciation for them. I wasn’t put off by the fact these were old films, nor did I hold anything against them for looking their age in terms of the production values, acting techniques and the like. I accepted them on the level of being trail blazers for the films to come, and I began to appreciate them even more for the fact that they really don’t make fantastic monster movies any more. So, when I finally got around to re-watching Tod Browning’s Dracula I found myself developing quite a crush.

Let it be known that this film isn’t faithful to the novel, but it IS faithful to Robert Balderston and Hamilton Deane’s stage play, and it was this I kept in my mind. I knew from my previous viewing that it wouldn’t be following the typical game plan, and that is perhaps when I started to become lenient with the film’s progression. This film isn’t brilliant or perfect by any means- it is a deeply flawed film and for that matter, perhaps more than a little goofy, but Bela Lugosi’s performance and presence isn’t one of those flaws. Really, this is well and truly Lugosi’s film and for good reason- the man exudes the off-kilter power that Dracula possesses. The rest of the cast do what they can, but really, Lugosi is THE coolest cat in the movie.  Edward Van Sloan plays a decent Van Helsing, and there is a great part when he uncovers Dracula’s identity with a mirror. The look in Dracula’s eyes say “Oh, it’s on now, motherfucker.” and Van Helsing returns the silent threat with one of his own: “BRING it.” Awesome sequence. 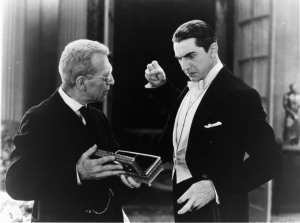 Dwight Frye is phenomenal as Renfield. You remember that hilarious portrayal Peter McNicol did of that character in Mel Brooks’s Dracula Dead And Loving It? McNicol’s mannerisms, voice and craziness comes from Frye’s Renfield, right down to the teeth. It’s safe to say that Frye set the absolute standard for Renfield that has been duplicated many times since, but few, if any, have reached that level of sublime insanity. Trivia bite for you; Frye worked on war planes in World War II. Think about that and tell me how you feel. 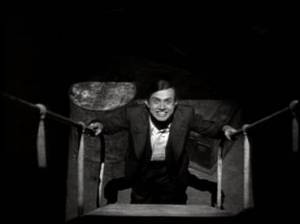 Other than those three main performances, this really is a gorgeous film to look at, that plays almost like a magic show. You must keep in mind that this was made back in the Great Depression, where money was scarce, so new technology was improvised- no digital tactics here- the visual effects you see were done by humans. What also lends massive assistance to the film is the distinct Gothic atmosphere. Although (I believe) the film itself is actually set in the 20’s, it still retains the Gothic sensibilities that we associate with Dracula- ancient, crumbling architecture, yawning catacombs, forboding cemetaries and fog… yes, by today’s standards this sounds cliche, but in this case, it works beautifully.

Another element of this film that will stand out is the use of mood- the version I watched had very few musical cues, therefore, despite the actors talking and incidental music, this is actually a quiet film, which helps sell the whole eerie dream like quality of this film. Despite this, there are some actually quite intentionally funny parts, most of them coming from Renfield (who seems to have a curious habit of wandering wherever he pleases around Doctor Seward’s sanitarium without any chaperone, hmmm).

Now, one of the most common complaints that have been raised about this movie is it’s pacing. I agree that this film does drag in places, it doesn’t help that most of the actors don’t have the same charisma as Lugosi, Van Sloan and Frye, and that some scenes aren’t conclusive, and a few plot threads are abruptly dropped. This is true too because I found myself wondering what the hell happened to Dracula’s Brides. You only see them for two or so scenes and nothing else becomes of them.

All said and drained, no, this movie isn’t scary per se, nor is it the epitome of Stoker’s original creation, but view this film with all of the other points I have brought to bear- the entire sensation of the film is that of a languid, sumptuous dream that won’t let you wake up until it’s finished having it’s way with you… much like Dracula himself. If you struggle, you won’t enjoy it as much, but if you just go along with it and accept it for what it is, submission will be more pleasant than you think. If you are a horror/Dracula fan, you owe it to yourself to watch it just once.